Fresh, new and lively look at our wonderful world of global robotics...technology, business and people.

"You're Going to Love What You Hear!" 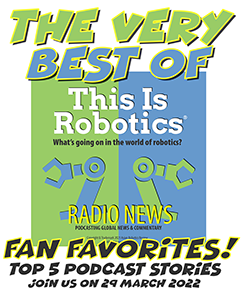 PLEASE JOIN US for the podcast premier program of This Is Robotics: Radio News, a fresh, new and lively look at our wonderful world of global robotics…technology, business and people.

The lineup for our premier show includes:
BACK TO THE FUTURE WITH SURGICAL ROBOTS
Oh, boy, new millionaires will be made

UNINTENDED COINCIDENCE has our premier program coinciding with National Kiss & Make Up Day (seriously, look it up)

In honor of NKMU Day, Radio News will take a look at the human fascination & repulsion for sex robots.

THE FOUR MOST REVOLUTIONARY ROBOTS OF THE NEW MILLENNIUM
We have our picks. What about yours?

The lineup for podcast #2 includes:

THE TROUBLE WITH COBOTS
Arguably the most important advance in robotics in the last 50 years has got a problem: sales. Why is that? Important and far-reaching consequences of those puny sales are a major concern for manufacturing and productivity.

THE FANTASTIC FIVE
Five fascinating robot innovations from Asia, each with a massive upside for the global robotics industry.

CHINA AND ITS INLAND TRADING PARTNERS: ITS SUPERCITIES!
Morgan Stanley fanned out 30 researchers across China to take the automation pulse of five unique regions. The results are fascinating.

WORLD ROBOTICS THROUGH THE YEAR 2030
Boston Consulting Group has put an interesting lens to the next decade of robotics, highlighting “seven unfolding developments that will influence the direction of robotics in the next ten years.”

The lineup for podcast #3 includes:

AMAZON, ASTRO AND OUR LIVING ROOMS
Is Amazon about to crack the code on how to make a mobile robot a part of the family? Amazon shocked the robotics world in 2012 with Kiva, then again in 2015 with Alexa, and maybe now is gearing up for a trifecta.

INTERNATIONAL INTERNET DAY: WRONG DATE, WRONG PEOPLE…
Every October 29th International Internet Day is celebrated around the world, but did you know that it’s the wrong date, the wrong people, and the wrong computers? Larry Roberts and Tom Marill did it first in February of 1966, three years earlier than 1969 event celebrated widely. And the reason why Larry and Tom did it is absolutely fascinating.

SPACE JUNK & ROBOTS
We’ll visit with Space Junk in Low-Earth Orbit. Whether it’s mom’s dinner table or outer space, we haven’t learned to clean up after ourselves. Meet the robots that want to take on the chore.

THE IMPORTANCE OF MACHINE TOOLS TO EVERYTHING
We’ll peer into the wonderful world of machine tools—tools that make tools, without which there are no robots, automation or smart factories. There are only three countries that dominate. Perish the thought that we have a trade war with any one of them.

The lineup for podcast #4:

PITTSBURGH: HOW ROBOTICS SAVED A CITY
By 2000, 29 steel companies in Pittsburgh had declared bankruptcy, cratering its middleclass, and any future upon which the great city might have had hopes to grow and thrive. How did robotics bring the city back from the dead?

IS THIS THE GOLDEN AGE OF AMRS?
Unless you’ve been under a rock somewhere, you’ve undoubtedly heard the noise of their wheels and the rush of their whizzing by you, either on TV news, YouTube, or better, in person. What you’re seeing and hearing is the future arriving in a hurry. They’re called AMRs, robotics newest celebrities, autonomous mobile robots.

GLOBAL ROBOTICS PATENTS: THE PATENT WARS!
Patent activity is a useful indicator of technological progress and innovation in robotics. “Between 2005 and 2019, 72,618 robotics patents were granted worldwide.” Who is leading, who is on the rise, and who are the also-rans?

In other words, the patent wars! Who’s winning? Let’s take a look.

THREE BREAKTHROUGHS: CAPSULE ROBOTICS, THE ALL-ROBOT AUTO PLANT, AND THE DEXTEROUS, FIVE-FINGERED COBOT HAND
Instrument-free, noninvasive diagnosis and therapy inside the digestive tract will be performed through a new branch of robotics: capsule robotics.

In Japan, it seems that only “smart” robots need apply for work at Nissan’s brand new “intelligent” auto plant.

What’s the next big breakthrough tech for the cobot. How about a dexterous, sophisticated five-fingered hand?

The lineup for podcast #5 “The People Program” includes:

THE IMPORTANCE OF AN END-OF-YEAR “PEOPLE PROGRAM”
This Is Robotics: Radio News proudly concludes its 2021 podcast programming season with The People Program: Robotics and Automation Are Really All About People, Unless We Give Up On Ourselves! …Will We?

CHINA’S CHRISTMAS MIRACLE AND WHAT IT MEANS FOR ROBOTICS
The first story in today’s People Program is as fantastic as it is true. It’s called China’s Christmas Miracle.  What this event meant for robotics and automation is incalculable. Funny things happen when you give people hope. This is a story about hope. China’s best-ever Christmas gift, December 1978: Deng Xiaoping and the birth of modern China.

YES, ROBOTS TAKE JOBS (NOW WE KNOW. WHAT NEXT?)
In Honor of Studs Terkel: Pink Slips for Old Technology. For every robot deployed in the U.S., three jobs are lost…permanently. Do the math, it’s only a matter of time until those deployments take their toll. Robots are necessary, but so are jobs for people. Here’s how to have both.

FLEXING PITTSBURGH’S ROBOTICS PROWESS
Pittsburgh’s transformation from dying steel town to a global robotics powerhouse has it positioned to help meet America’s greatest manufacturing challenges. ARM Institute is ready to train and upskill a workforce in robotics (for students, college graduates, and displaced workers …no matter what age you are!) Including Free 2022 how-to PDF download with links and references.

HOME & HUMANOIDS FOR THE HOLIDAYS
Home for the holidays is not such a pleasant experience for millions globally. But it could be. Holiday Humanoids for those abandoned and living alone, the totally depressed…or the desperately lonely. The possibility of “relational AI” and humanoid robots combining to be wonderful companions for humans…and not just on holidays.

ROBOTS TO KEEP WINTER OLYMPICS SAFE
The Winter Games are right around the corner. The massive Wukesong Arena is getting ready to host the ice hockey events for February’s Beijing Winter Olympics 2022 (February 4 to 20). For 16 days, over 30 robots will be deployed to help keep the players, staff, and thousands of fans safe from COVID.

ASK ANY COBOT: HUMAN WORKERS COST MORE THAN WAGES
Renting cobots: From Capex to Opex. Rent, lease, contract for, or Robots as a Service (RaaS)…whatever!  Not owning a cobot has a big upside that’s getting bigger.

HOORAY FOR CONSTRUCTION ROBOTICS: ON THE RISE FOR 2022 Construction site cacophony. We’ve all suffered through the annoying din. Construction is not only noisy and a traffic nightmare, but it’s also inefficient, woefully expensive and dangerous. Thankfully, construction is now getting serious attention from automation and robotics, and 2022 might be a breakout year.

The lineup for podcast #7:

WELCOME TO THE AMERICAS: ADDVERB TECHNOLOGIES
“We Change the Way Things Move” says Addverb Technologies. A Twelve Time Zone Chat: Boston, Bangkok, Delhi and San Diego crackled on last evening as Asian Robotics Review was introduced to Addverb Technologies for a chat with its new CEO for the Americas, Mark Messina. And we recorded it all!

WHERE THE ROBOTS ROAM
After all those heady numbers of AMRs are bought, sold, and shipped; and then step off the gangplanks to work, where the hell do they go? Join us in the Lehigh Valley, south of Chicago, and in LA for a look at the fantastic, cavernous halls of commerce “Where the Robots Roam”

FANTASTIC FIVE #2
Five Fantastic Robots That Are Transforming Industries and Changing Our World! Fantastic Five travels the globe looking for special, purpose-built robots that take on heretofore impossible challenges…and pull them off! Fantastic Five salutes the robots and the innovate teams that built them.

FINDING THE GENIUSES THAT ROBOTICS NEEDS Are You One of Them?
There are a million undiscovered geniuses in the world who, in order to be revealed and flourish, need to experience a spark of passion that ignites and illuminates their genius. Among them are roboticists-in-waiting who will change the world. Let’s find them. These 35 free online robotics courses—from superb educators at prestigious universities—certainly help.

The lineup for podcast #8

THE TROUBLE WITH COBOTS
from 9/2021 podcast #2
Arguably the most important advance in robotics in the last 50 years has got a problem: sales. Why is that? Important and far-reaching consequences of those puny sales are a major concern for manufacturing and productivity.

SEX ROBOTS WILL NEVER MAKE YOU CRY
from 8/2021 podcast #1
The allure, fascination and repulsion for humanity’s new best friend

THE FANTASTIC FIVE OF ASIA
from 9/2021 podcast #2
Five fascinating robot innovations from Asia, each with a massive upside for the global robotics industry.

IS THIS THE GOLDEN AGE OF AMRs?
from 11/2021 podcast #4
Unless you’ve been under a rock somewhere, you’ve undoubtedly heard the noise of their wheels and the rush of their whizzing by you, either on TV news, YouTube, or better, in person. What you’re seeing and hearing is the future arriving in a hurry. They’re called AMRs, robotics newest celebrities, autonomous mobile robots.

FINDING THE GENIUSES THAT ROBOTICS NEEDS Are You One of Them?
from 2/2022 podcast #7
There are a million undiscovered geniuses in the world who, in order to be revealed and flourish, need to experience a spark of passion that ignites and illuminates their genius. Among them are roboticists-in-waiting who will change the world. Let’s find them. These 35 free online robotics courses—from superb educators at prestigious universities—certainly help.

KOREA’S ROBOT TECHNOPOLIS
A fascinating piece on the rise of Daegu City, which will be, by 2028, the biggest and most important robot city in all of Asia.  Decade of work pays off in high-tech victory as Daegu City wins nationwide competition as mega-site for Korea’s Robot Technopolis

MOXI AND THE WOMEN WHO BUILT HER
A well-deserved shout to Diligent Robotics scoring a $30 million investment, and what it means for service robotics as well as to robotics companies founded by women

CLASH OF TITANS: HACKING ROBOTS
With all that’s going on in the world today, how do we cyber-harden our industrial robots from malicious interventions? With 3-million industrial robots deployed worldwide, protecting them is becoming a very real problem. The newest game in town for robots is defending themselves from hacking and cybercrime.

FANTASTIC FIVE
Showcasing five ways to save big on robots, cobots and automation, while streamlining productivity on the cheap.

ELON AND HIS ROBOT HOMBRE
Elon Musk, as humanoid robot builder, in a story we call Elon and His Robot Hombre. So what if he misses a few deadlines. You know he’s going to ace the final exam.

Elon Musk is the best thing to ever happen to humanoid robotics.