Should Robotics Events Have an Exclusive Online Network?

As COVID drives live trade shows into an online-only existence, online trade shows begin to show promise for the robotics industry. What COMDEX Virtual almost pulled off a decade ago offers robotics a unique opportunity.

Will virtual events go bye-bye when live trade shows return?
I think we are all familiar with the pattern by now. A trade show, conference or expo cancels its live event because of COVID and is quickly recast as an online-only format. In this conversion process, many times a former three-day live event might get spread out online over several months, which only serves to entangle one event with others as they too begin to come online.

Almost immediately every re-cast event begins messaging the Internet and emailing its databases. As more events convert from live to online, the more messaging goes out, and all that messaging begins to multiply exponentially.

Then, when the actual show dates for the online event roll around, all of the event’s streaming content gets mixed into the tsunami’s already-existing ad clutter. Again, another exponential increase in online content swells the accumulating mass all the more.

Most all of the tsunami is produced by scores of well-meaning marketing departments trying to get eyeballs to notice their event and register for attendance.

But, at what point does it all become counter-productive and so bewildering that online event fatigue sets in? Early on, say in April, it wasn’t much of a problem.

For example, in early April, Okta Inc., had its annual event. CEO Todd McKinnon, “Business-to-business conferences like ours are dependent on people meeting in person,” he said. But after this year’s edition of Oktane20 Live, an all-digital show, drew record attendance. He’s now considering a permanent shift to a hybrid model of both in-person and digital attendees next year and beyond.

“We had tons of leads and off-the-charts engagement with an all-digital format,” McKinnon said after 20,000 attended [online], compared with 6,000 a year ago [live]. That’s the experience that every event seeks and every marketing department hopes to achieve with its messaging.

But as April bled into May, June, and then July, and the events began piling up, things changed, and not for the better.  And the tsunami is soon to swell again as the event high season of September to October begins to loom.

An exception in late July was the very well organized and well run The Cobot Expo put on by Universal Robots (UR), who used Ontario-based vFairs (founded in 2016; $2.4M in 2019) as its virtual trade show producer.

The vFairs interface for The Cobot Expo was far from spectacular, but certainly slick enough to be best of breed for robotics trade shows so far in 2020. The interface was pleasant to navigate and easy to find presentations, or UR expo booths, as well as expo booths for some two dozen vendors who signed on to participate in UR’s online trade show.

UR announced that it would run for three days, and it did; there was no extension into extra months:  July 28 to July 30, and that was it.

The afternoon of the 30th, I spoke with UR’s Joe Campbell, senior manager of strategic marketing and applications development. He was just concluding one live streaming presentation and getting ready to deliver another, all from the comfort of his home in Michigan; all of which is another big plus with virtual events for both people and budgets. Microsoft Teams and vFairs was all he needed to run the entire event.

The net-net outcome for Joe were the 7,000-plus visitors over three days; that’s 2300-plus per day or 292 per hour of potential sales. The best part he said was that better than 50 percent of those visitors had never previously attended any UR event. They were all new to UR!

The all-important data on the 7,000 was already in hand and ready for use courtesy of vFairs. Campbell said that the usual 180 days that it takes to close sales from a live trade show would now, with all the instant data UR had amassed over the three days, compress the former sales cycle at least in half.

What’s a show producer to do?
COVID has driven most every scheduled trade show and conference worldwide from their appointed convention 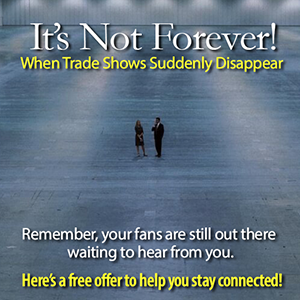 hall setting. Even a behemoth like CES, the annual high-tech mob scene in Las Vegas, is going virtual, so too are TV super shows like the Emmys.

Short of going digital, other events have just folded their tents for the time being, hoping to return when the coast is clear of COVID.

Other than supply chain MODEX 2020 in early March, there’s been nary a live robotics event anywhere since. And therein lies a looming problem if these digital clones are to continue being virtual for the foreseeable future.

How can the events be separated from one another and how to disentangle the tsunami of online messaging such that each virtual trade show gets an equal chance to succeed?

Kushner on the benefits of virtual trade shows 2011!

As a former broadcast TV producer at an ABC affiliate who is used to hyper-organized programming, I find the mush of virtual events and the attendant cacophony of its messaging and outreach particularly jarring. And much of the quality of the online programming rushed at the Internet audience to be just bad theatre.

Many of these online substitutes feel like warmed-over webinars, others like a hybrid webinar and podcast mashed together, and still others like tepid video. Talking heads with slides went bye-bye in the 80s, but are now back in full yawn.

With events now cancelled by the dozens, event producers and individual corporations have begun rethinking outreach to their customers and fan bases in terms of substitute online productions. What could possibly be offered online that could somehow rival and replace an extravaganza like Mobile World Congress?

Everywhere on the Internet these days is the fruit of all that rethinking; online events trying to fill the void left by cavernous trade show halls that are now empty ghost venues.

It’s an impossible act to duplicate, and probably shouldn’t be, so, wisely, they don’t. However, experience at producing great online content is what most lack. Working in a new online medium, not just as a supplement to a live show, but as THE SHOW, has many at a loss, and their online productions so far look crude.

A possible remedy
Even after a COVID vaccine is distributed to every arm in the world and live trade shows crank back up again in earnest, this newly discovered and realized virtual communications medium will be alive and well. And it will be powerful; it’ll have reach and be effective.

If organized well enough and nurtured, this nascent digital world could assist robotics immeasurably. A solid remedy to its future use might well be in organizing an online global network exclusively to serve robotics.

Cable TV did so years ago, splintering into defined programming for a defined audience.

Think, ABC TV network with events as the TV programming, all neatly scheduled within the network. The network would police all the programming and ensure a fair and equal opportunity for every robotics trade show or conference.

Anyone in the robotics ecosystem, or anyone else, for that matter, could go to a single source for information about any of the Robotics Network’s upcoming trade shows and other events.

Then, after each event concludes, the Robotics Network would archive all of the event key notes, presentations or other content, making it available to individuals, other companies, and/or educational institutions.

Back to the future
Online events replacing live ones isn’t new. When the mega-size, live trade show COMDEX bit the dust forever in 2003, there was an attempt to revive it as an online program in 2010, COMDEX Virtual.

It failed after two years, but its premise and purpose were worthwhile.

Unfortunately, the COMDEX Virtual experiment took place over a decade ago when the online world was a lot more clunky and less capable of doing all the cool things it can today. With the advent of 5G, online events could really get a powerful boost.

To gain a little insight into the plus side of virtual events, check out the video of Michael Kushner from 2011. Back then Kushner was VP of digital media strategy for UMB. It’s a prescient look at the online world’s potential, but ten years ahead of its time.