Satellites projected to quintuple over next decade

The problem: orbiting space junk
Like climate change, overcrowding of space junk in the all-important Low Earth Orbit or LEO (400 to 2000 kilometers straight up) is getting worse, and could eventually preclude the safe addition of more satellites.

In fact, space debris scientist Donald Kessler predicted an eventual “collision cascade” (the  Kessler Syndrome) that would render access to Low Earth Orbit all but impossible.

One article on the topic ran the scary headline: How the Kessler Syndrome can end all space exploration and destroy modern life.

That’s a bit too sensationalist, but there’s always the possibility that humans will go to excess and cause some catastrophe in outer space. One project, SpaceX’s Starlink, intends to orbit 12,000 small satellites by 2027, which is six times the number of satellites currently in orbit.

Future space flight, manned or otherwise, is in jeopardy unless we can clean up the mess we’ve made of all near-Earth orbits since 1960. By 2025, 1100 satellites are scheduled to launch annually through the 20,000 pieces of space clutter that the US Space Surveillance Network is currently tracking.

Estimates are that 20,000 pieces of space junk orbiting Earth are “larger than a softball” (6 percent of which are objects with masses greater than one ton); and then there are another 500,000 pieces of debris that are about the “size of a marble”. Smaller than that, like paint chips, number in the hundreds of millions. Yes, paint chips; they can be lethal. A paint chip travelling seven times faster than a bullet nearly took out a window on the space shuttle Challenger.

Satellites account for only 2,000 of the objects in orbit. Most of them operate in Low Earth Orbit (LEO), the same area where the majority of space debris is found.

Since all of these 8,800 tons of space fragments are travelling at speeds of up to 17,500 mph—almost seven times faster than a bullet—collisions with satellites or spacecraft could cause serious damage.

Keeping accidents from happening is getting more difficult. As seen from the photo and video above, the space around planet Earth is crowded, with the total number of satellites in orbit projected to quintuple over the next decade. 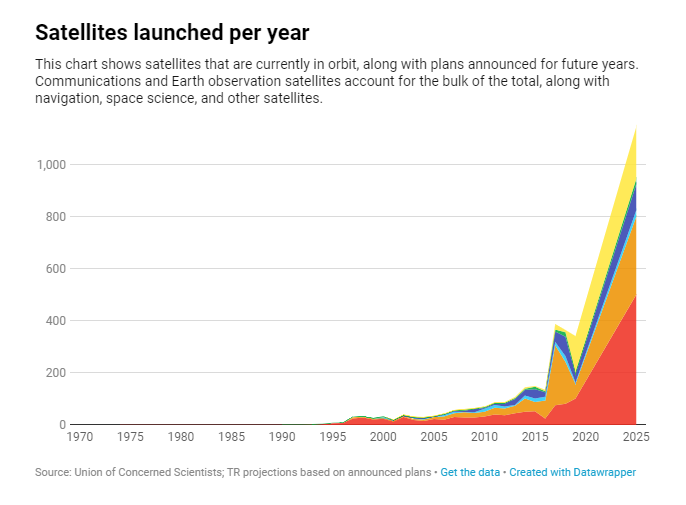 For example, in May, an 18-ton empty core stage from a Chinese rocket passed over New York City before crashing into the Atlantic Ocean. 18-tons is about the equivalent of three Mercedes GL350s. Had it crashed into Central Park, the resulting damage would have been calamitous.

With the forecast for quintupling of satellites in ten years, threats for similar incidents like the empty core stage will undoubtedly become more frequent.

Luckily, there have been no serious satellite accidents since the 2009 head-on collision between the derelict Russian Cosmos 2251 and an active Iridium communications satellite 790km above Siberia.

Nevertheless, operating satellites carry a combined insurance coverage of $20 billion, and the chances of another 2009-type collision are growing stronger.

Surprisingly, there has not been a thundering effort to get quickly into space to clean things up a bit. The main culprit has been how to make money as a debris sweeper. The ROI is not attractive; and no one sees much value in salvaging satellites for parts or precious metals.

DARPA’s Operation Phoenix had thoughts of building debris-sweeping space robots, but it drew congressional ire for taking on what private companies were already contemplating. Then too, most all satellites going aloft these days are pre-programmed to “deorbit’ themselves when their missions come to an end; deorbiting involves slowing down to tumble towards Earth to incinerate themselves, or to move to a parking orbit safe from collision.

Still, there’s all of that legacy metal hurtling around endangering every mission that takes off from Earth. GPS, TV, and communications satellites are all jeopardized. The International Space Station is continually hit by small pieces of space junk, and twice a week has to maneuver to avoid bigger chunks.

There are some takers when it comes to what’s being called Active Debris Removal (ADR) in Low Earth Orbit.

Three companies are actively involved in developing solutions for LEO-based problems: one Japanese, one Swiss, and the other American, plus one college, the UK’s University of Surrey, are each developing plans to send robots aloft to sweep up, dispose of, and, in some instances, service some of this man-made metal hurtling around overhead.

The American company, Space Logistics, a subsidiary of Northrop Grumman, doesn’t remove space debris, rather, it extends a satellite’s lifespan by docking with it to provide propulsion and altitude control as needed. Hence, its name: Mission Extension Vehicle or MEV. On its maiden flight the MEV-1 proved it could service in-orbit satellites by removing them from traffic, servicing them, and then putting them back into orbit.

That leaves three companies exclusively operating in the area of Active Debris Removal (ADR): Japan’s Astroscale, the Swiss start-up ClearSpace (Swiss Federal Institute of Technology in Lausanne), and the UK’s “RemoveDEBRIS” from the University of Surrey.

Each of these ADR developers has a unique, explanatory video on how it’s technology is used
for the remediation of orbiting trash. See below: