Since 2000, the ASEAN economies have collectively grown faster than any other Asian economy except China. GDP has quadrupled, per capita income tripled, and foreign direct investment (FDI) into ASEAN countries quintupled. 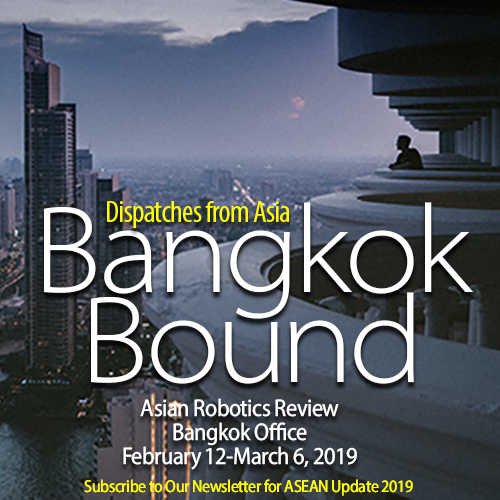 Asian Robotics Review will be in our Bangkok office February 12-March 6, 2019.

Korea’s good buddy is Vietnam; Japan is reaffirming itself in Thailand and with the Mekong5; East Asia and Singapore are designing a future for Myanmar; Indonesia is a 250-million-person enigma…still; Malaysia, with its new leadership, is readying for its next big step up in automation; the Philippines is waffling with indecision…still; and China is building the land, sea and air trading infrastructure that will bind it all together.

According to Bloomberg Business:
“The 10-economy bloc of the Association of Southeast Asian Nations, or ASEAN, is a natural magnet for new factories thanks to low production costs and well-trodden manufacturing plants, solid growth with the five biggest economies expanding at about 5.3 percent on average, and improving ease-of-doing-business rankings — not to mention geographical proximity to China.”

For example, Samsung’s investment of $2.5 billion in its Vietnamese factories elevated the country’s per capita GDP by 1.2 percent; or bond buying by Japan’s central bank has left the country flush with cash to spend, which is finding its way to Thailand.

Next Up: Free Trade Agreement 2019

Robots, Automation, and the Kra Canal Project
Often proposed, never attempted, the $28B project has now taken on special meaning

Japan Gets Cozy with Thailand
Can Thailand become kingmaker of robot-driven automation along the Mekong River and beyond?

Singapore: Seeking a Bridge Between
Can robotics become a key contributor in shift from simply “adding value” to “creating value”?

Lucky Moon Over Myanmar
Why fail when everyone wants you to win? Myanmar could well become one of automation’s finer creations

See also: Traditional, labor-intensive manufacturing once based in China
moving to ASEAN nations