​While everyone has kept an eye firmly on the robotics and automation technology moves emanating from China and Japan, Korea has been tiptoeing into the ASEAN with lots of money and big plans. 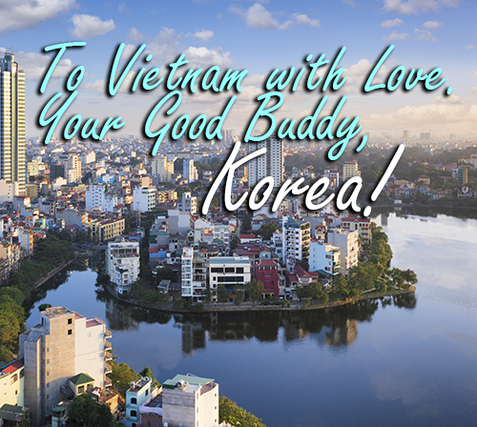 For three years now, quiet, under-the-radar Korea has made smart, decisively bold moves into the ASEAN, especially with Vietnam, and has now added a high-tech initiative led by robotics to its overall strategy.

The recent signing (June) of a memorandum of understanding (MOU) between the ASEAN-Korea Centre and the Korea Institute for Robot Industry Advancement (KIRIA) heralds another wave of forthcoming Korean Foreign Direct Investment FDI.

Officially, the MOU is to “facilitate the ASEAN-Korea cooperation in the Robotics industry.”

Whenever you see robots and automation agreements with ASEAN countries, it’s all about infrastructure and manufacturing as the play underway.

Korea’s strategy is more directed to what may be called its “Mekong One”, which is Vietnam. Watching what Korea has already accomplished in Vietnam is a good indicator and vantage point to see where this ASEAN MOU in robotics and automation is bound next. 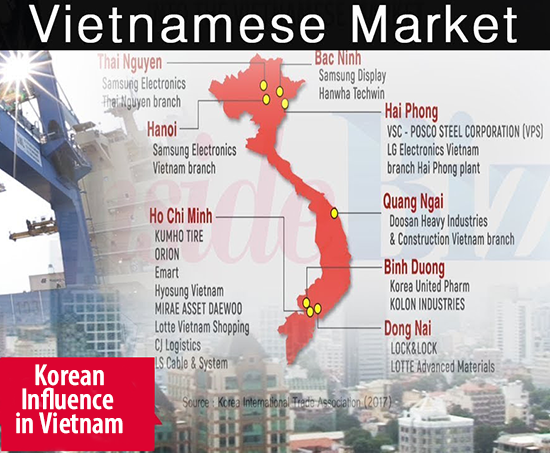 ASEAN on an FDI roll
As the International Business Times has reminded us: “Remember when everything was “Made in China”? Those days are long gone and will likely never return.”

​Instead, get ready for seeing lots of “Made in Thailand”, “Made in Vietnam”, or “Made in Singapore” just about everywhere on everything.

The East Asian big three (China, Korea and Japan) are pouring billions into the ASEAN Community, with certain of the 10-nation AEC countries getting special treatment.

There are good economic reasons why the ASEAN gets more FDI than anywhere in the world, including China; and conversely, why China is the largest contributor to ASEAN FDI. Three of the best reasons: 650 million new customers and low-wage employees living in a tropical paradise where anything grows in abundance and where half the land mass desperately needs roads, cities and factories (especially in the aforementioned CLVM).

Best of breed of the CLVM is easily Vietnam; it’s a budding powerhouse of potential with 90 million citizens sitting along a two-thousand mile coastline that looks out onto the busiest shipping lanes in the world.

Every little bit helps as when Korea’s LG Electronics moved a TV production facility from Rayong, Thailand to Hai Phong on Vietnam’s coast. LG’s reason for moving 930 miles distant was labor costs are cheaper and China-based suppliers are closer.

In Vinh Phuc province, for example, in the first ten months of the year, 13 of the 21 foreign-invested projects were from South Korea.

By 2014, the Korea Times was boasting back then: South Korea Becomes Biggest Investor in Vietnam, Beating Japan.

Korea gets busy
Business Korea reports: “The whole Samsung group has a very keen interest in Vietnam. Samsung is looking for new business opportunities in Vietnam not only in electric and electronics, but also in construction and shipbuilding…Samsung, already invested $5.7 billion, into many of big projects such as the Vung Ang 3 thermoelectric power plant, Long Thanh airport in the west, and Khanh Hoa shipyard.

“LG Electronics will also build a new factory in Haiphong for $300 million by 2020. In this factory, LG will manufacture air conditioners, refrigerators, and washing machines targeting the Vietnamese domestic market.

“It is very remarkable that Korean traditional industries, including textiles or shoemaking, as well as distribution businesses also enter Vietnam.”

For three years ongoing Korea has built cinemas, chains of supermarkets and electronics stores all over Vietnam. 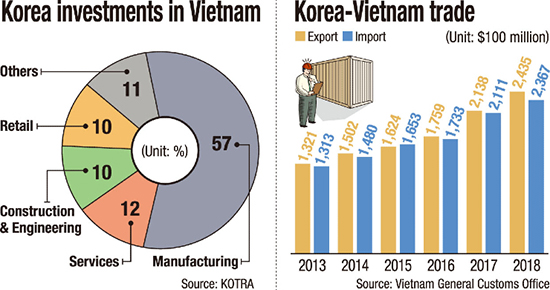 “In 2015, Emart, one of South Korea’s largest retail chains, opened its first hypermarket in Vietnam in an ambitious plan to expand its network throughout Vietnam in upcoming years.

Get the impression that Korea is in Vietnam to stay?

Enter the robots
Now it’s time for robotics and automation to enter factories and warehouses, as well as to help build out infrastructure throughout the country to connect its 90 million new friends (almost twice the population of Korea). 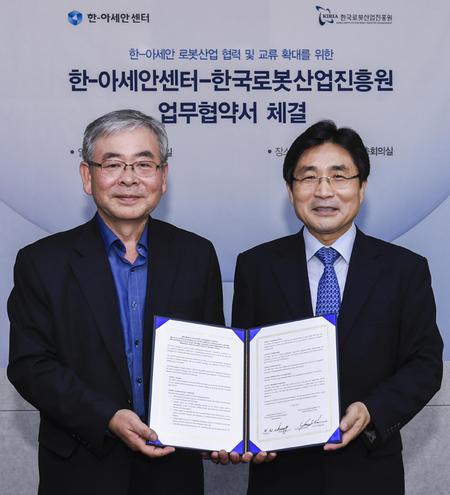 In May of 2016, Vietnam announced “sci-tech cooperation” with South Korea

“The Ministry of Science and Technology (MoST)’s national agency in the southern region worked with a visiting delegation from the Republic of Korea’s Institute of Industrial Technology (KITECH) and enterprises in Ho Chi Minh City on May 5 to share information and promote cooperation in this field.

“The MoST will propose suitable mechanisms and incentives to help them invest in in the country. In the near future, the two sides can assess and build a sizeable sci-tech project in Vietnam to include it in the protocol on science and technology cooperation between the two countries.

“With 28 technological research institutes and large number of companies operating in the field, the [Korea] RoK can completely collaborate with Vietnam in technological issues of its concern and need, according to a KITECH representative.”

That’s a generous offer from a country in need of lots of robot-driven automation.

With a unique sphere of influence in Vietnam, Korea has a ready-built model for Cambodia.

Culturally, Laos is close to Thailand, so it’s 7 million inhabitants might well fall into Japan’s sphere of influence, as would Myanmar with which Thailand shares a long border.

What about China in all of this? China has an able ally in Cambodia for the time being, but as Vietnam looks more inviting to its fifteen million citizens, things could change.

When you see Thailand’s booming business of Siam Cement Group (SCG) eyeing Vietnam, you got to believe that a lot of construction is in Vietnam’s future.

Korea is in the center of it all.