Plus Service Robots at Tokyo Olympics!

The "Roaring Twenties" for industrial robots and automation may be rolling in early, especially in Asia. 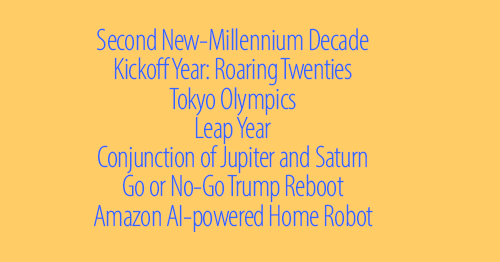 2020:Are we there yet?
The Roaring Twenties for robots and automation are on the way and may kick off the second decade of the 21st century sooner than anyone could believe possible.

2019 may be best remembered, if remembered at all, as a filler year, a way station, a brief handful of days when the great Sino-American trade war wound down and disappeared. A year of recovery and getting back to normal with a new normal. A time for a fresh restart.

New car models for 2020 will be in showrooms earlier than usual. New U.S. presidential candidates will be making promises earlier than usual as well. The amazing automation tech behind the 2020 Tokyo Summer Olympics will debut soon, maybe upstaged only by the early debut of amazing automation tech behind 2022 Beijing Winter Games. Competition has a habit of speeding up time.

In Asia, competition over robots and automation has accelerated dramatically in comparison to the rest of the world; in Asia, it feels like 2020 has already arrived.

It’s not because the International Monetary Fund’s Regional Economic Outlook: Asia Pacific has vaulted Asia to “the forefront of automation with an estimated 65 percent of the world’s total industrial robot usage…[or] that it’s the “region with the highest robot production” at 64 percent.

It’s not because forecasters like Frost & Sullivan’s Industrial Internet of Things Market in Asia-Pacific, Forecast to 2022, have pegged industrial IoT in Asia as having successfully converged information technology (IT) with operational Technology (OT) and ready for a large-scale breakout.  Or the likes of Mordor Intelligence forecasting that “Asia-Pacific is expected to account for the largest share in the overall Industrial Internet of Things [IoT] market.”

It’s not because IDC sees 2019’s size of the robotics market – robots, drones, and all related technology and services [$120 billion] leaping to $210 billion by 2022 [$141B for industrial robots], with Asia leading the market by a wide margin all the way. “Around half of that will be in manufacturing,” reports John Santagate, IDC’s research director of commercial service robotics, IDC.

And it’s not because the population of industrial robots at work in the world, 1.7 million (most of them in Asia), will have doubled since 2016.

Actually, it’s not any single metric, but all of them collectively, that augurs well the arrival of a Roaring Twenties for robotics and automation.

Very importantly too, it’s also the occasion of the third of the three East Asian tigers—China—by far the most important of the three, finally coming of age. Japan, then Korea, and now China have each completed a thirty-year growth spurt, taking each from utter poverty to modern societies with accomplished high-tech credentials and global prowess in manufacturing. Japan, 1950 to 1980; Korea, 1960-1990; and now China, 1987 to 2017; it’s a trifecta that’s a first in human history.

For all three East Asian tigers, everything is coming together just in the nick of time for their aging populations and workforces, rising wages, and the lack of productivity necessary to meet the future demands of their three populations.

Each has a national plan in place—a roadmap for success—and each is putting billions on the line to execute those plans:

Just in Time, Korea Leans on Technology for Help

McKinsey’s year-long study of what it calls China’s “productivity imperative” reasons: “Improving innovation performance would have additional benefits—helping China’s transition to a more balanced, consumption-driven economy by expanding the service sector and providing more high value-added jobs. Rising productivity is also critical for creation of the well-paying jobs that can raise living standards and employ a growing urban population.”

That the core of all this technology-innovation-productivity is robotics and robot-driven automation is a message to the rest of the world that it too will pass this way as well. Much sooner than later, every global economy will have to come to terms with productivity; the only difference being that the three East Asian tigers are just the first to take the journey.

Korea, Japan, and China’s national plans might well be of great help as models for the rest of the world to follow.

By 2020, no one will care who or what was the force behind Belt & Road. All that will matter is that multi-billions of dollars, north and south, east and west, will be flowing over the greatest land and sea transportation network ever built. Most of those billions will originate in China and flow back into China, but many billions will also flow north into China as branded goods from Southeast Asia, from countries previously known only as suppliers of raw materials.

The advantages for Southeast Asia and India are abundantly clear as forecast by Ruchir Sharma, Morgan Stanley’s chief global strategist and head of emerging markets. At the Asia Society (December 8, 2018), he delivers a fascinating look at Asia’s economic outlook for 2020 and beyond.

Salient among his global themes going forward for 2020 and beyond: 1. Continuation of the ongoing anti-globalization movement; 2. The shift south (to Southeast Asia) for building factories and redirecting supply chains to mitigate risk, even after the Sino-American trade war is resolved; 3. The rise of Vietnam (he calls a mini-China), Thailand, Malaysia, and Indonesia as alternate sites for global factories and their supply chains. The shifts, he says, are already taking place…and due to accelerate.

Thailand’s $45 Billion Leap to Industry 4.0
Robotics and logistics carving out a $6 billion share

Sharma’s portrait of the U.S., and how shockingly powerful it has become since the financial meltdown of 2008 (financial flows, stock market, and trade) is truly eye-opening. But, he says, the U.S. is on a “sugar high” that will wane just a bit (just a bit!) in the coming decade. The overall beneficiary of the U.S. leveling out will be Asia; but make no mistake, the U.S. will easily continue on as world leader in capital flows, stock market prowess, and business and job creation.

It’s well worth a listen (see above 17-minutes, edited from one-hour presentation).

Overall, under the influence of the East Asian tigers, “Southeast Asia’s GDP is forecast to nearly double, from $2.4 trillion in 2015 to $5.2 trillion.”

And just maybe, Amazon’s Vespa (AI-powered) hits living rooms everywhere. It will roll but (hint) it flies upstairs like a drone.