AS A REFRESHER, the goal of “Made in China 2025” (launched in 2013), “is to comprehensively upgrade Chinese industry, making it more efficient and integrated so that it can occupy the highest parts of global production chains.”  —Center for Strategic and International Studies

It’s about time!
Can China build out “Made in China 2025” without Terry Gou (Guo Taiming) and help from his Hon Hai (2317.TW) conglomerate? Probably. Should it try? Of course not!

Hon Hai (better known by its trade name Foxconn) is valued at $49 billion, owns, controls, or has an interest in over 230 companies (Bloomberg), is the world’s largest contract manufacturer of consumer electronics, employs over one million Chinese citizens, has over 60,000 industrial robots and advanced automated factories deployed in China; and, with a gamble at factory-building in 1988, was instrumental in making Shenzhen the success it is today, which is a lot like saying it put China on the map as an electronics powerhouse. 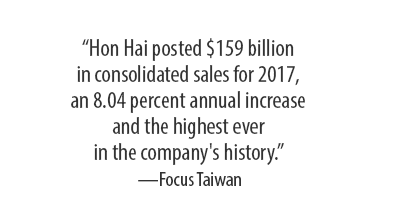 It’s an empire that took three decades to build; and at its 30th anniversary party (2018), Gou said he wants more: “Based on our 30 years of experience in innovation and precision manufacturing, we’ll transfer industrial data to artificial intelligence [AI], since we have core technologies in Internet of Things [IoT], big data and cloud computing, as well as industrial robots, which can also help support small and medium-sized enterprises.”

If “Made in China 2025” is a kind of Marshall Plan for China’s ambitions in manufacturing technology, and Hon Hai the template from which to build it all, then Gou is the perfect field general to pull it off. He moves fast, has a reputation for being fixated on making quality products, and he’s principled and trustworthy. Geez!

The real question: What took China so long in getting Terry Gou into the mix?

If the Taiwan-born kingpin of industry was waiting for a guarantee about getting a major piece of the China 2025 pie, then last week’s remarkable IPO of his Foxconn Industrial Internet (FII) might just be it.

Now let’s get to work
According to the China Statistical Yearbook, China has 2,801,143 factories; that’s an easy 10-times more than the U.S. Two years from now, in 2020, China will be at the halfway point in the race to “Made in China 2025”. Of course, no one expects two-plus million factories to be modernized in under seven years. However, if China wants to throw off the yoke of low-cost manufacturing and move up the quality chain, a massive core of Factory 4.0-enabled production will be necessary.

China needs every pair of hands it can muster to make “Made in China 2025” happen, and no one has bigger hands than Terry Gou.

Three-year-old Foxconn Industrial Internet (FII), a unit of Hon Hai, just went public, spun off with an IPO in Shanghai that raised $4.2 billion, jumping its market value to $61 billion, which makes it much larger than the parent company’s own $49 billion.

“The company will aggressively devote itself into the realization of ‘Made in China 2025,’ becoming the world’s leading industrial, internet-focused smart manufacturing and technology solutions provider,” said Tim Chen, FII Chairman.

That’s a mouthful: he got one of everything into that statement. But it’s also very true; China needs all of that and more to meet its lofty aspirations in factory automation.

Gou’s own sentiment as to the importance of the effort: “If we can’t change, we’ll be left behind. The next three years will be decisive. Our old formula for success will be shaken up.”

Ah, that’s more like it. China now has a legit Factory 4.0 champion, a trusted, scandal-free, master manufacturer and empire builder with a 30-year track record, who rose from lowly factory worker in a rubber plant to one of the richest people in the world. All spun out from a $7,500 loan from Gou’s mother.

China also badly needed a poster boy for “Made in China 2025”, and it got the biggest in Terry Gou. By 2025, the poster boy will be 75-years old, and yes he’s virile, energetic, and brilliant in spite of his age, but still.

With Foxconn’s cash cow of iPhone assembly for Apple getting soft (Apple provides over 50 percent of Foxconn’s revenue), and indeed, with all cellphone sales getting soft, the timing is good for Hon Hai to pivot toward more long-term stability.

Foxconn’s exposure to a “shrinking smartphone market, has helped wipe more than $18 billion” off its market value since June 2017.

As such, Terry needs China, and China needs Terry.

So, let’s get the show on the road, shall we? 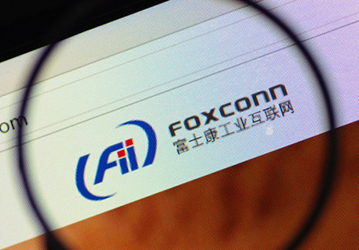 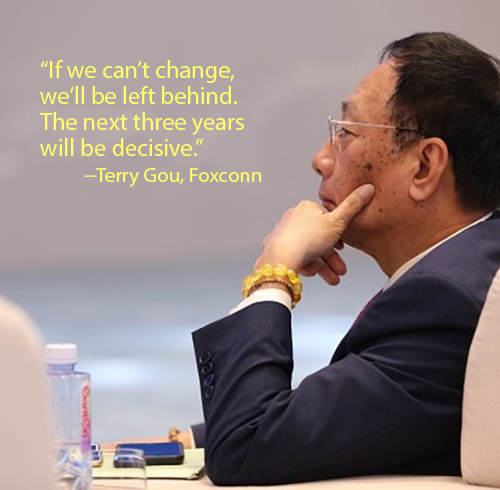 The new pivot
The new show is Foxconn Industrial Internet (FII) and the $4 billion it just scooped up from its Shanghai IPO; Shanghai’s largest since 2015.

FII, which is in the exact right spot to support a Hon Hai pivot, provides industrial robots, cloud computing services to a long list of big-time manufactures, and may even take over the Apple iPhone assembly lead. FII saw $56 billion in revenue in 2017 (by comparison Cisco did $48 billion).

With the aforementioned smartphone biz going soft, FII will have far fewer phones to fill with its electronics goods. After 10 percent growth throughout much of 2017, net income is forecast to take a hit. However, getting on the China 2025 bandwagon could be a welcome remedy to declining growth.

Dan Wang, an analyst with Hong Kong’s Gavekal Dragonomics, concurs, noting that “PC growth has been negative and smartphone growth has slowed down,” so everyone’s looking to industrial technologies to take up the slack.

With Xi Jinping’s “Made in China 2025” program earmarking “tens of billions of dollars in subsidies…for smart manufacturing sectors,” Foxconn Industrial Internet should make Gou very happy. Especially so, since he’s wanted to get into the smart factory business for some time now.

“We are an incredibly large, traditional technology manufacturing business,” says Gou. “Now we need to use the power of AI . . . Foxconn will push smart manufacturing with all our strength.”

FII, young as it is, seems destined for a large role in Gou’s plans. Success means taking the magic of Shenzhen and replicating it countrywide, especially with the Gou-targeted small to medium manufacturers. In a process that generally takes up to two years China’s Securities Regulatory Commission fast-tracked FII’s IPO; while, at the same time, some of the country’s largest state-owned businesses (SOEs) invested heavily. All of which shows China’s eagerness to get going and its faith in Terry Gou.

Plus, as Wang furthered: “Terry Gou enjoys excellent relations with senior members of the Chinese government. He has invested heavily in several provinces whose party secretaries ascended to the politburo.”

The stars are aligning
FII will use the $4 billion in IPO proceeds “to fund eight new projects including cloud computing, building a data center, 5G and the Internet of Things (IoT) projects and expansions into so-called intelligent manufacturing.”

With curiously good timing, “the day before FII’s IPO, China’s Ministry of Industry and Information Technology released guidelines on the development of the industrial internet, pointing out the aim to build infrastructure and industrial systems in the sector by the end of 2020.”

Foxconn’s own industrial internet platform—BEACON—has been introduced to each of its plants. FII Chairman Chen Yongzheng said: “We want to establish unmanned plants with our more than 60,000 industrial robots, freeing human labor from the assembly line.”

There’s even an immense trove of manufacturing data for algorithms to comb. Given Foxconn’s three decades at both fabricating and assembling electronics components and gear, FII will start its factory automation quest with a unique AI data advantage.

Where all this good fortune and good money take “Made in China 2025” depends on good generalship; and in Gou, China seems to have made a good choice. That’s a lot of good that needs to happen in a short amount of time, but the prize is beyond astounding.

The Mercator Institute claims that if “Made in China 2025” is successful, Chinese companies will control 70 percent of all domestic consumption in 10 key industries. Wow!