Should the U.S. be uneasy over China’s newfound AI power surge?

“I think the U.S. has more innovations nowadays than China. But Chinese companies, as well as universities,
are trying to do more innovative research in terms of both quantity and quality.” —Tong Zhang, executive director, AI Lab Tencent Holdings

So what’s to envy?
China Won. Time’s boldly emphatic cover sits atop a piece by Ian Bremmer: How China’s Economy Is Poised to Win the Future. However, such a “China Won” cover may not be the last time those two words grace a magazine.

To Bremmer’s way of thinking, China’s most important ambitions are in artificial intelligence (AI), which would be a world-rocking China Won magazine cover with colossal implications. It’s a prize still up for grabs, but China is closing fast.

“China is the better bet to win,” writes Bremmer, “if the decisive factor is depth of commitment to a single goal and the depth of pockets in pursuing it.” 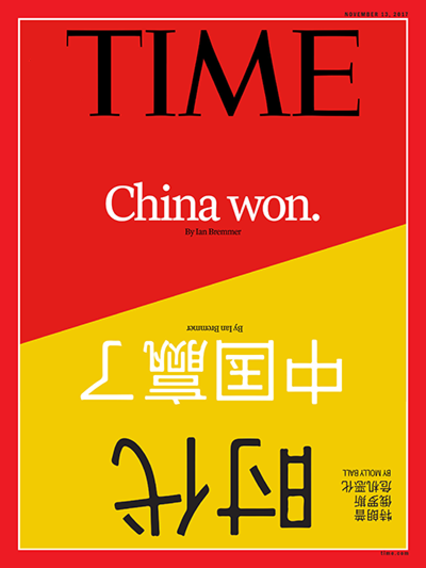 It’s a page ripped directly out of the U.S. playbook for dominating in computers and the Space Race. It’s a playbook that now sits alone on a dusty shelf somewhere in Washington, DC. Except, of course, for those few pages that now guide China.

China’s announced plan is for multi-billions of dollars in government aid to be put toward “homegrown AI to match that developed in the West within three years, for China’s researchers to be making ‘major breakthroughs’ by 2025, and for Chinese AI to be the envy of the world by 2030.” It’s a level of commitment, organization and cash not seen anywhere else in the world, which offers China a leg up from the get-go.

Some still remember that day in May of 1961 when John Kennedy promised a man on the Moon before the end of the decade; well, Xi Jinping just made a similar claim about AI. Neil Armstrong and more money than we can think about made it happen by whisker in 1969. Xi is betting that he can ditto that success.

Where do things stand?
According to technology consultant, Anastassia Lauterbach, founder of Lauterbach Ventures, China did $1.5 billion in AI-related business in 2016 and is projected to bulk up to $150 billion by 2030 (by way of comparison, China’s published military budget was $146 billion in 2016; corruption in China was pegged at $100 billion in 2014).

AI revenue in North America is estimated for 2017 to clock in at $1.2 billion.

On the surface of things, the AI seesaw seems to be even for now.

Those numbers are just the tip of the iceberg, adds Littler’s Garry Mathiason, who spun out a mind-boggling future at his Washington Roundtable on artificial intelligence that will see a $1 trillion AI industry worldwide by 2030, and then become the world’s largest industry by 2050. That’s a mighty big prize for whoever leads, and it’s within China’s grasp.

To go from just over a billion to $1 trillion worldwide in a dozen years means that lots is about to happen very quickly.

Researchers at Harvard’s Belfer Center see leading technology companies quickly getting ahead of the curve by basically “remaking themselves around AI.” That remaking is taking the form of Narrow AI and machine learning, which is usually software that is automating a human activity. “Machine Learning is a term that has been around since 1959, and means Narrow AI can rewrite software in response to new data.” That any company is remaking itself around AI is smart and forward looking. In fact, not to could invite disaster. Reinforcement Learning, for example, enables Narrow AI to teach itself through trial-and-error, e.g. DeepMind learning to play Go.  Why wouldn’t any company desire that?

It’s with General AI, basically the ability of AI to solve new problems, where AI starts to make many, including Stephen Hawking, get a bit nervous. They are concerned about the step from General AI to “self-aware AI”, or sentience.

In a recent Wall Street Journal interview, Tong Zhang, executive director of the AI Lab at Tencent Holdings, summed up his view of the China/US AI standings: “I think the U.S. has more innovations nowadays than China. But Chinese companies, as well as universities, are trying to do more innovative research in terms of both quantity and quality. So I think it’s happening, but the U.S. on this particular aspect is definitely leading.”

The defining question yet to be addressed in the West is who controls the exabytes of data necessary for Machine Learning and Reinforcement Learning? Private companies or the state or a combination of both?Stanford University adjunct professor and former AI scientist, Andrew Ng, calls AI “the new electricity”.  He contends that AI, like electricity before it, will soon disrupt every industry. Electricity in the U.S. is a resource available to all and is regulated through the Federal Energy Regulatory Commission. Should AI’s data resource be similarly shared and regulated?

It’s not a question that China has to deal with; China’s government has complete access to all of the data. In the great AI race getting underway, who then has the advantage?

For example, China gave ChemChina, a state-owned enterprise, $43 billion to buy Swiss giant Syngenta. The reason: securing the country’s food supply. Xi Jinping wants to clean up China’s food supply by modernizing agriculture. “Syngenta’s portfolio of top-tier chemicals and patent-protected seeds will represent a major upgrade.” If Syngenta needs exabytes of data to train its AI, the government will open the tap. That’s impossible in the West with data privately controlled. 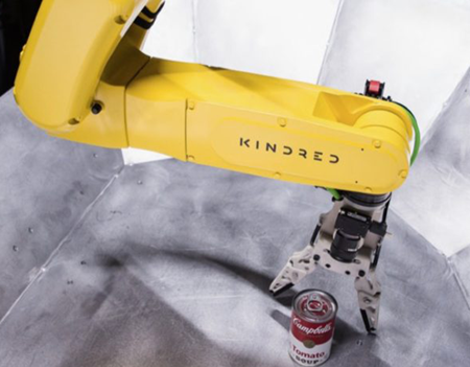 Automation, robots, and AI are the tools necessary to attain that goal, so China will spend billions to acquire the capabilities to pull it off. In short, there are no alternatives. China has no choice

In the recently concluded $25 billion Singles’ Day, rural shoppers showed up big for the first time. What was one of the biggest items on their shopping lists? Water purifiers.

Now imagine this same ChemChina/Syngenta scenario playing out in industry after industry?

Intelligent manufacturing & smart robots
In manufacturing, China is faced with the same no-choice reality. If there was no factory automation, and no robots, and no AI—even if every man, woman and child in China loved working in factories twelve-hours a day—China would be unable to meet its own needs or realize the goal of becoming a manufacturer of high-quality goods.

What does a country do when a half-billion people want a refrigerator or an air conditioner…and the need can’t be met? Beijing, we have a problem.

The Welcome to 2018 article series detailed the mass-modernization of China’s factories, the robots and automation gear and parts cascading into the country, cranking up to a fever pitch beginning in April. We called it the Blast Off! Today, seven months later, automation is accelerating along multiple fronts.

It’s great to have factories—as well as warehouses and logistics centers—upgraded and stuffed to the rafters with robots, cobots, CNC machines and 3D printers. Now there’s the need to make sense of it all, to bring intelligence to the factory floor. A connected, robot-driven factory is an ideal place for AI to optimize a manufacturing process, from the acquisition of raw materials straight through to customer delivery.

“First comes digitization, which creates data, and then comes the AI,” is how Daniel Ng describes introducing AI to the manufacturing process.

“Here is one pattern that might be useful for spotting when AI might affect your industry or some other industry you care about,” explains Ng. “First, the industry is digitized, meaning activity is moved to computers. That creates data, which gives AI an opportunity to come in and eat the data and automate decisions or do things more intelligently.”

The connected factory, the Industrial Internet of Things (IIoT), and the digitization thereof are off and running. Enter Narrow AI and Machine Learning, and let the data flow.

AI for robots
However, the key actor in it all, the robot or cobot, would be a better fit into the intelligent manufacturing process if it too were a little smarter. How about “industrial robot arms to perceive and act like humans instead of just strictly following pre-programmed trajectories?”

That takes some drilling down into the robot or cobot, which is far different from just adding vision and touch sensors. It’s what is being called a “new kind of AI for robots”. Goodbye to the rigors of robot programming…and to teach pendants as well.

Two companies have a bead on making robots smarter, more dexterous and capable with AI.

One is a newbie from Silicon Valley named Embodied Intelligence; the other, founded in 2014, is a Canadian company named Kindred.ai. Embodied just scored $7 million in November from Silicon Valley’s Amplify Partners. In October, Kindred.ai, hit the big time with a $35 million investment from Tencent Holdings (China).  Yes, China.

Notice the difference in the level of investment between the two. When China locks on, China locks on. Notice also that Tencent Holdings is the employer of the aforementioned Tong Zhang, executive director of the AI Lab at Tencent Holdings. For sure, the newbie Embodied Intelligence is in for some scrutiny from China. AI for robots is a technology that every factory, Chinese or otherwise, must have going forward to unleash the full potential of robot-driven automation. Sooner rather than later, one or both of these companies will become superb takeover targets. Ian Bremmer might well bet on China.

Embodied’s Pieter Abbeel, a native Belgian and UC Berkeley professor, has been developing ways of “teaching robots new skills, rather than actions, and how to learn, rather than just how to obey.” The company best describes its own work as: “We are building technology that enables existing robot hardware to handle a much wider range of tasks where existing solutions break down, for example, bin picking of complex shapes, kitting, assembly, depalletizing of irregular stacks, and manipulation of deformable objects such as wires, cables, fabrics, linens, fluid-bags, and food.”

Such skills for robots would catapult them into every industry and make them more widely utilized within industries. That smartie robot skillset would become must-have technology for the big boy robot manufacturers like FANUC, ABB, Yaskawa, and KUKA.

Their AI toolset is basically deep reinforcement learning, deep imitation learning, and few-shot learning.  “The result isn’t just a new set of skills in the robot repertoire, but teachable robots that can be deployed for new tasks on short turn-around.”

So how does all this teaching of robots happen? Humans do it wearing VR headsets.

Humans get beneath the skin of the robot by becoming the robot; and they do that through virtual reality, wearing a VR headset and using a motion-tracking controller. You can see why Kindred.ai calls them pilots.

“The idea is that with a flexible enough learning framework, programming becomes trivial, because the robot can rapidly teach itself new skills with just a little bit of human demonstration at the beginning.”

“You can put on a VR headset and immerse yourself inside the robot,” Abbeel says. “The human is doing all the control and thinking, and you get very, very clean data collection. The things we’re interested in cannot be done with existing automation—they are just completely out of scope.”

The China difference
McKinsey points out that China gave its digital players space and money to grow and experiment before sliding in with official regulation. “Today, the government is playing an active role in building world-class infrastructure to support digitization as an investor, developer, and consumer.”

The U.S. is doing none of that. Should it?  When next will a Time magazine cover sport yet another bold China Won?

See related: Kai-Fu Lee: Cutting Through the Fog of AI