Workplace Transformation and the Reinvention of Work

“Automation is not our enemy. Our enemies are ignorance, indifference, and inertia. Automation can be the ally of our prosperity if we will just look ahead, if we will understand what is to come, and if we will set our course wisely after proper planning for the future.” —President Lyndon B. Johnson, signing bill creating the National Commission on Technology, Automation, and Economic Progress, August 19, 1964

Off to Washington, DC
Can forty global experts on automation, robotics, and artificial intelligence (AI) come together to make some sense of the technological disruption and transformation of our jobs and workplaces as they “go digital”?

Can a single, six-hour day of knowledge and thought sharing among business and industry leaders, academics, and government make a dent in the debate over the harrowing vision of technological unemployment that may or may not be humankind’s destiny?

Weighty issues, to put it mildly. Expertise and experience from Asia, Europe, and the Americas came and sat together around a conference table, tasked with articulating a realistic, real-world assessment of what’s ahead and encouraged to offer up reasonable next steps at a way forward. 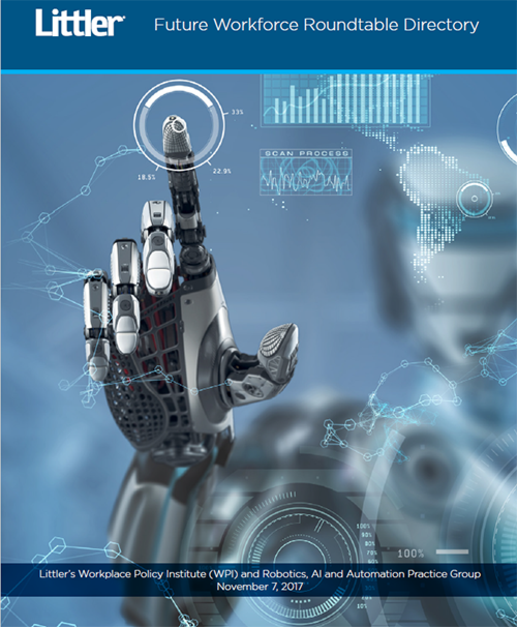 Brainstorming & doing
On Tuesday morning, November 7th, in Washington DC, —election day in the U.S.—I participated in the Thought Leadership Roundtable on the Technological Transformation of the Workplace and Reinvention of Work.

The Roundtable took place on Connecticut Avenue within shouting distance of the Washington Monument, comfortably nestled amid the home offices of high-end organizations like the National Education Association, the National Geographic Society, and the American Chemical Society, among many, many others of equal stature.

Reading and writing about the world of automation, robotics, and artificial intelligence (AI), which is a daily activity for me as publisher of Asian Robotics Review, I was more than intrigued by the day-long conference that awaited me on the 4th floor of 815 Connecticut Avenue.

That address, by the way, houses the DC law offices of Littler, the Roundtable’s organizer and host, which is the “largest, U.S.-based law firm devoted exclusively to management in employment and labor law matters.

In addition, Littler is arguably the elder statesman among robotics law practices in the U.S. Its Robotics, AI & Automation Practice Group was a first of its kind. I know of none other that predates it. Its founder, now a good friend of mine and colleague these past five years, is Garry Mathiason, a rare and brilliant individual who saw the need for Tuesday’s Roundtable back in 2012, when we first met. Did I mention yet that Garry’s a bit prescient?  Buttonhole him sometime and you’ll see what I mean.

The robotics practice has grown like a weed (over 150 attorneys); so much so that Garry now co-chairs the group together with another Littler attorney, Natalie Pierce.

Okay, that’s the table setting for the Technological Transformation of the Workplace and Reinvention of Work that Garry and Natalie called to order promptly at 10AM. It went on for six hours, and the time flew by.

No PowerPoint decks!
Surprisingly, the Roundtable wasn’t forty bright people with PowerPoint decks yakking away for six hours. Rather, the plan was refreshingly different. The day was divided into six sessions, each led by a well-known expert.

For example, Henrik Christensen opened with the Future of the Workplace, the Workforce and Work Itself. He set out the salient issues and commented on them for five minutes, and then the crowded Roundtable of experts provided observations and next steps.

Henrik was an excellent choice for the opening session; probably because he’s also the guy who orchestrates the U.S. Robotics Roadmap series (2009-2016). He’s got a knack for leading groups of people on big-picture tech projects.

Henrik’s session was followed by five other sessions, each of which was equally well run and similarly effective.

Next steps
Now for the really cool part of the Roundtable. The next steps ushering up from each session and the reasons driving them were recorded and written down. The resulting document of those recommendations will be submitted to the Department of Labor (DOL), at the DOL’s request.

The DOL’s just-published (November 7) DRAFT Fiscal Years 2018-2022 STRATEGIC PLAN is actively seeking comments and suggestions. The Roundtable’s recommendations “represent a tremendous opportunity to have a direct and immediate impact on government policy as it relates to the integration of AI and robotics into our labor market,” added Garry, noting the special entre the recommendations will have at the DOL.

Everything is inertia. Getting the recommendations circulating in Washington creates great buzz for automation, robotics and AI

The recommendations produced at the Roundtable could end up on Capitol Hill as presentations to congressional subcommittees on robotics and automation. Congressional champions with commitments to advancing the recommendations might then come forward to help craft legislation from the documents.

One potential champion appeared for the Roundtable’s working lunch. Congressman Bob Latta (R-Ohio), who had authored the SELF DRIVE Act, the new federal bill covering self-driving cars. He challenged the Roundtable to educate Congress about the juggernaut of automation and to come forward with recommendations for solutions.

The “doing” part of the brainstorming was refreshing and a whole helluva lot different from any conference I had ever attended. My usual is multiple PowerPoint sessions stacked up like planes on a runway, each with an aftermath of networking and glad-handing everyone in sight.

We’ve been here before
On the flight from Boston to Washington, I read through a 53-year-old government study by then-President Lyndon B. Johnson (LBJ). In August of 1964, LBJ signed into law the National Commission on Technology, Automation, and Economic Progress.

It seemed to have a lot of relevance with the Littler Roundtable.

In a speech at the signing, LBJ said: “Automation can be the ally of our prosperity if we will just look ahead, if we will understand what is to come, and if we will set our course wisely after proper planning for the future.

“If we understand it, if we plan for it, if we apply it well, automation will not be a job destroyer or a family displacer. Instead, it can remove dullness from the work of man and provide him with more than man has ever had before.”

Two years later, the Commission handed LBJ the study he had requested: Report of the National Commission on Technology, Automation, and Economic Progress, 1966.

To me, the hundreds of pages from the half-century-old study boiled down to one of its core findings: Technology kills jobs, but technology does not kill work. Interesting.  LBJ didn’t want automation to be a “job destroyer”, yet it was. However, the near-infinite ability of humans to create work for themselves was what saved the day.

Of course, as the group responded when I brought up the Johnson-era report, the times and technology have changed: The convergence of multiple technologies from sensors, chips, AI, and the Cloud, etc. present multiple fronts, and the speed at which they are converging is exponential. But, and the group was fairly unanimous in reply, humanity can do it again.

Not hearing it on the Hill
Chuck Merin, EVP, Prime Policy Group, with 35 years of working on Capitol Hill as a consultant and lobbyist, gently lambasted the group, saying that the AI and robotics industries have got to do a better job at informing elected officials—especially the general public who do the electing of these elected officials—about what’s going on with the convergence, its impacts on society and the workplace, and provide insight into the realities of the near future. He’s not hearing it on Capitol Hill, he said, which only plays into negative discourse and fear mongering over job losses.

Chuck was right, and the group collectively hung its head in agreement. We all need to do a better job at getting the word out.

To that point, subsequent articles in this Littler Washington Roundtable series will reproduce the issues and responses and recommendations that are headed to the Department of Labor. Asian Robotics Review will carry all of the recommendations, and will distribute them as widely as possible.

Here are the session topics from the Littler Washington Roundtable and the full list of participants.

The forthcoming Second of the multi-part Washington Roundtable article series will detail the group’s responses and recommendations, all of which this writer found reasonable yet fascinating to contemplate. You’ll get to see them all.

Disruptive Technologies Are Invading the Workplace: Are Jobs Being Destroyed?
Is Employment Being Created?
Discussion Leader: Jeff Burnstein, President, Association for Advancing Automation (A3)

See related:
Second in a multi-part article series on the Littler Washington Roundtable
What Will Robots Know?
After we endow robots with human-like senses, what will they know about their human workmates…and how will that knowledge be used?