So much automation, so quickly! History’s first middle class to arise together with the Internet, robots, and Artificial Intelligence (AI). And it's not "just" all about China!

Without robots and automation—including the Industrial Internet of Things (IIoT), Factories of the Future, and an educated workforce that can run the show—Asia will not be able to keep pace with itself.

Prosperity’s other name
Push aside for a moment all the charts with 3D bars and pie slices that have tracked the mind-boggling ascent of robot sales in Asia since 2013, as well as the scads of forecasts about the massive deployments coming at us through to 2021, like this chart below: 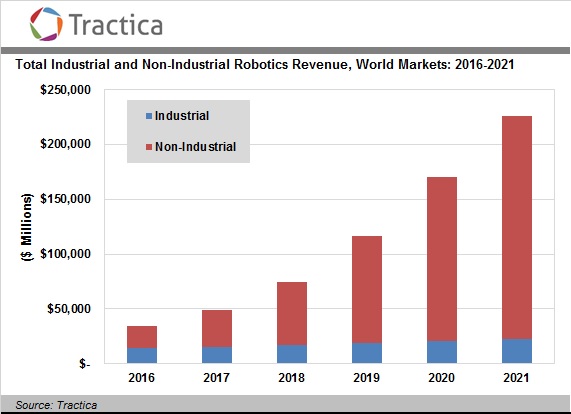 Better insight into Asia’s need for robots and automation, and why its future will demand ever more from these technologies, can be seen in the rise of Asian prosperity, which is uplifting tens of millions across Asia into a better life.

Prosperity’s other name is the middle class. The chart below [The global middle-class wave] displaying the numbers of Asians entering into or soon to enter the middle class is staggering…and without precedent!

The speed at which the Asian middle class is rising is similarly staggering…and also without precedent! 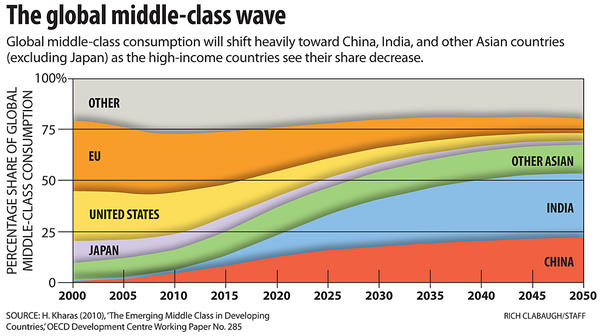 Why so many robots?
Of course, it is way too soon in the upswing of Asian prosperity to lay any of its current success at the feet of newcomers like robots and automation.

However, going forward, all prosperity—and the sustaining of that prosperity —will be directly attributable to those steel-collar workers that are daily trooping into factories throughout East Asia, and very soon thereafter, in great numbers as well into Southeast Asia and India.

And not just any robots, but smart robots. Robots that work well alongside humans; robots that can contribute to improve processes (manufacturing, logistics, agriculture, or otherwise); robots that are self-repairing; robots capable of self-analysis in order to improve their own technology; robots that can manage other robots; robot teams that can drive an entire factory or network themselves to drive distant factories and supply chains.

No doubt the formula on how to sustain and expand that prosperity to so many new millions hopping on the middle-class elevator is what must keep Xi Jinping and other Asian leaders up at night. Each knows well that the bright future ahead could turn very bleak in a hurry without a continent-wide reset on how Asia goes about earning its livelihood.

Technology, specifically robot-driven automation, is the critical element to the continued prosperity of Asia’s middle class. Without robots and automation, Asia will be hard-pressed or even unable to lay claim to “59% of middle-class consumption.” 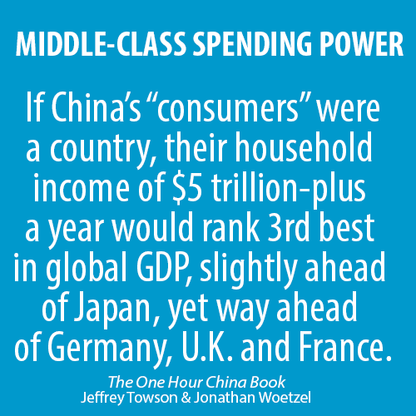 And here’s the spending (see chart below) that this mass of middle-class humanity will be putting forth by 2030. Middle-class spending is projected to be in excess of $55.7 trillion in 2030; world GDP combined in 2016 was $75 trillion. 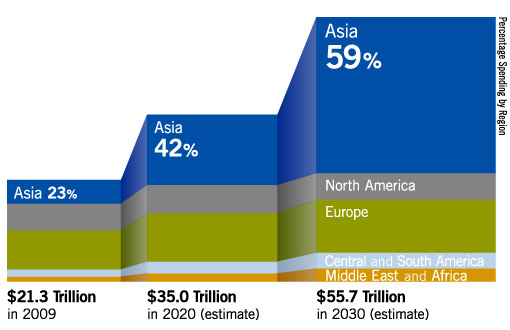 Manufacturing and logistics without robots, as well as agriculture without automation, will be unable to support 3 billion middle-class consumers, especially with the advanced lifestyle to which they aspire and the up-scale and branded goods buying that defines middle-class prosperity.

Rather, there will be shortages—severe ones!—in everything, even basics, all of which could easily foment social unrest.

See related: Race to the Factory of the Future (3-part series)

By 2021 over 500 million people in China will be considered middle class. “That would make China’s middle class alone big enough to be the third-most populous country in the world.” That’s an awfully powerful bunch of humanity.

And Asia’s rising middle class isn’t all about China
“Already some 67 million households in ASEAN countries [10-nation community of Southeast Asia; see MAPS] are part of the “consuming class”, with incomes exceeding the level at which they can begin to make significant discretionary purchases. That number could almost double to 125 million households by 2025, making ASEAN a pivotal consumer market of the future.”

Without robots and automation—including the Industrial Internet of Things (IIoT), Factories of the Future, and an educated workforce that can run the show—Asia will not be able to keep pace with itself.

That’s why Asia is hot about scouring the world to buy robots, robot suppliers, robot manufacturers, AI developers, and any other device or technology capable of jump-starting manufacturing from manual and semi-automated to fully automated.

Asia’s Internet middle class…a first!
History tell us that the world has seen two middle-class explosions of prosperity. The first was the original Industrial Revolution in Europe; think, steam engine, our first general purpose technology driving the middle class into existence. The next was in North America (and Europe) by way of the next general purpose technology, electricity or electrification. And the third is Asia, which is taking place right now. 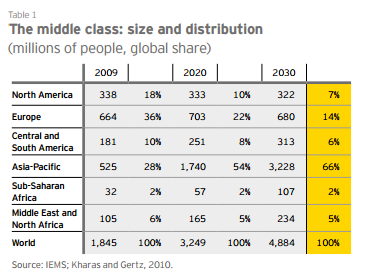 What a cool, added benefit it is to have the Internet and artificial intelligence (AI) to help a middle class grow.

Imagine November 11, 2020 when Alibaba’s Jack Ma switches on Singles’ Day…not just to China but to 3 billion Asian middle-class consumers. It’s sure to knock the roof off something big.

Alibaba might well earn in a day more than the annual GDP of most countries.

Imagine again, when Cloud-based AI arrives, and the network effect kicks in to this same 66 percent of the global middle class.

This Asian middle class is special, and robots and automation are key to realizing its unique destiny.

It could well be that Tractica’s forecast about the global robotics industry expanding to $226 billion in 2021 is on the low side…the very low side!