Coming sooner than we think: Robots won't be programmed to work, they will be taught to work. They will "learn" to work!​

“By 2018, 30% of all new robotic deployments will be smart collaborative robots that operate
three times faster than today’s robots and are safe for work around humans.”
—Jing Bing Zhang, Research Director, Worldwide Robotics and Asia Pacific Manufacturing Insights, IDC Asia/Pacific

Counting robots all over again
The yardstick of a country’s automation has traditionally been reckoned by counting how many robots there are per 10,000 workers. 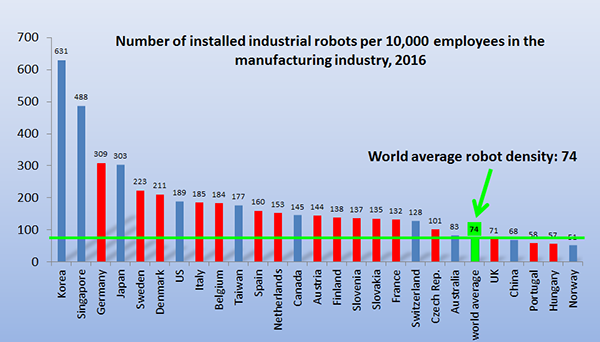 Artificial intelligence (AI) is showing us that a country’s robot density, if occupied by “dense” robots, is really legacy automation.

Strangely, without legacy automation to deal with, low boy China with 36 robots per 10,000 workers may actually be in an advantageous position.

Robot density vs “dense” robots
Imagine a factory that could mass produce Smartphones with each and every phone custom built to match the exact needs of each and every customer?

A photographer could order a Smartphone to finely match his or her specific professional and personal needs; a simultaneous translator of Romance languages at the United Nations could do likewise. Anyone could own a Smartphone custom built that would make that person better at what they do for a living as well as afford them a better lifestyle.

And if that Smartphone costs the same or less than a standard Smartphone and could be put together and delivered in a day, would that factory be a goldmine? You bet.

A human can’t possibly make mass customization happen and neither can a programmable robot, but for a “smart” robot working together with other smart robots in a smart factory it’s all in a day’s work.

Additionally, neither a human nor a “dense” robot would be able to provide much in the way of feedback data about the job performed, the process of manufacturing, or the product built. All of which does not make for a very smart factory at all.

However, sprinkle a bit of intelligence over that factory and things begin to percolate with change for the better. The Factory of the Future takes a jump up in smarts as legacy automation is plowed under and replaced with intelligence in the form of smart robots, smart 3D printers, smart CNC machines and other smart machine tools.

All of which makes artificial intelligence winning out against Lee Sedol in four games of Goless of a humiliation for humans than the brilliant emergence of a new way for humanity to build its tools.

China, as the world’schamp in robot purchases since 2013, wants to leap from 36 robots to 100 robots per 10,000 workers by 2025. That’s admirable, but will the robots be legacy automation or tilt to the smart side of things? China has an opportunity squarely before it to build an intelligent manufacturing infrastructure into which only smart tools will be allowed.

Having less and starting later than Japan’s quick ascent toward intelligence in manufacturing, China may be able to make up time combining AI from Baidu’s Institute of Deep Learning with that fromHuawei’s Noah’s Ark Labwith KUKA’s new robot AI network.

“Software Defined Robots: By 2020, 60% of robots will depend on cloud-based software to define new skills, cognitive capabilities, and application programs, leading to the formation of a robotics cloud marketplace.”
—IDC Worldwide Robotics

Such a union of technology as infrastructure for the Factory of the Future would make factories “efficient, flexible and connected”, as Daniela Costa, lead researcher at Goldman Sachs, put it, which will result in “a very significant change in business models for both manufacturers and equipment makers.”

When machines learn
The machine that beat Lee Sedol was not programmed to win, it was taught to win. It learned to win! And teaching machines to win is why Google’s cloud maven, Diane Greene,  hired two top artificial intelligence researchers: Fei-Fei Li, who was director of AI at Stanford, and Jia Li, who was head of research at Snapchat.

Computer vision, Fei-Fei Li argues, is the key enabling technology for all of AI. “Understanding vision and building visual systems is really understanding intelligence. And by see, I mean to understand, not just record pixels. It’s hard to imagine any intelligent computer of the future without it.”

Colin Parris, vice president of GE Software “believes that continued advances in data-processing power, sensors, and predictive algorithms will soon give his company the same sharpness of insight into the individual vagaries of a jet engine that Google has into the online behavior of a 24-year-old netizen from West Hollywood.”

“Intelligent RoboNet. By 2020, 40% of commercial robots will become connected to a mesh of shared intelligence, resulting in 200% improvement in overall robotic operational efficiency.”
—IDC Worldwide Robotics 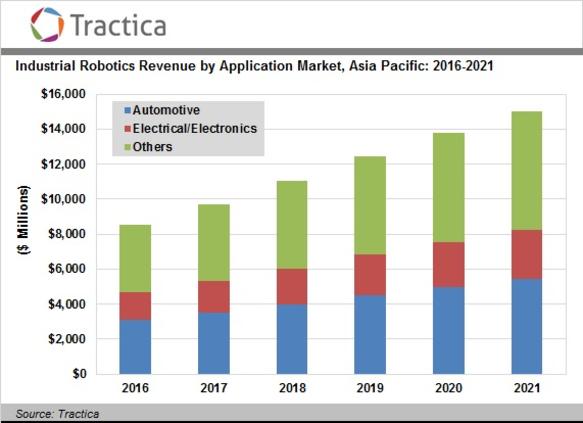 The awkward paradox
Unintended push back. Although AI technologies and technologists are racing forward, their advances are many times met with an awkward response from the very people and organizations that will most benefit from this new world of data and analytics: manufacturers.

Tech in Asia’s Michael Tegoscommenting on a recent McKinsey study says, “Most companies that have placed big bets on data and analytics are struggling to realize the gains they expected.”

Michael Chui, a McKinsey Global Institute partner writes in The age of analytics: Competing in a data-driven world:“In many areas, a few leading companies are racing ahead. But many organizations haven’t yet been able to scale up small-scale experiments to meaningfully improve the performance of the entire enterprise.”

“The biggest barriers companies face in extracting value from data is adapting core processes and building new capabilities at scale,” says Nicolaus Henke, global leader of McKinsey Analytics. “Embracing analytics is not about adopting a new tactic. It’s about changing your business model and the fundamental way you make decisions.”

Business models will change, change forever, and those changes will vastly improve and benefit manufacturing, but not without struggle from the human side of the automation equation.

As the McKinsey report concludes: “Organizational culture, mindset, and structure are the main stumbling blocks.”