Buying in…emphasis on “buying”
China’s ascent into the rarefied air of being an official AI juggernaut has been swift and powerful…and paid for in full.

Although China has just joined the ranks of the top 25 most-innovative economies on the Global Innovation Index for 2016 (at number 25), it marks the first time any middle-income country has ever gotten that high. In short, China’s is not your average middle-income country and doesn’t act that way at all.  And when it comes to AI, it most surely is not middle of anything. It’s on top.

China seems also to know exactly what it wants from AI and where it wants AI to take the country. And there’s no swagger in its ambitions, just consummate self-assuredness. Listen to this:

“China is poised to be a leader in AI because of its great reserve in AI talent, excellent engineering education and massive market for AI adoption,” saysKai-Fu Lee, a former Microsoft and Google executive who is now chief executive of Sinovation Ventures. The firm, formerly known as China’s Innovation Works, has invested $100 million in 25 AI-related startups in the U.S. and China in the past three years.”

According to Brian Fung in the Washington Post, AI advantage is critical: “Becoming a leader in artificial intelligence research and development puts the United States [or China] in a better position to establish global norms on how AI should be used. When AI stands to transform virtually everything including labor, the environment, and the future of warfare and cyber conflict, the United States could be put at a disadvantage if other countries, such as China, get to dictate terms instead.”

As with human intelligence, training is essential for artificial intelligence, and China has had a good sense of that need ever since Baidu “temporarily” got Daniel Ng and his neural nets in 2013 to make a home at Baidu’s Silicon Valley AI Lab as VP & Chief Scientist (some call it the Xerox PARC of AI). Ng exited (2017) to start Landing.ai (partnering with Foxconn) to us AI to “help make large manufacturing companies more efficient.”

AI investor and former McKinsey analyst, Lan Xuezhao, in her Asia Times piece, China’s big Artificial Intelligence (AI) push, zeros in on this data availability for training AI systems: “As machine learning algorithms become more and more commoditized, access to huge volumes of training data is starting to become the core competitive advantage. One instantiation of this can be seen in the Face++ / Meitu partnership, through which Face++ gained access to Meitu’s 850M user-strong dataset.”

Training AI is critical to its success: AlphaGo trained by playing hundreds of millions of games before taking on Lee Sedol; and factories will get better the more they manufacture.

Hans Tung of GGV Capital agrees on China’s data advantage in “the huge, switched on digital markets that drive the momentum” as well as being advantaged by “the creative, fast-paced energy of Chinese tech entrepreneurs.”

And, of course, buying any and all U.S. AI that fits the formula is essential, as evidenced by this chart showing China’s swift $6 billion Silicon Valley buying spree (see charts below).​​​ 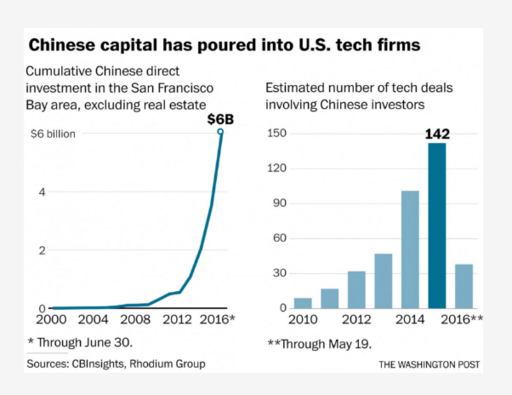 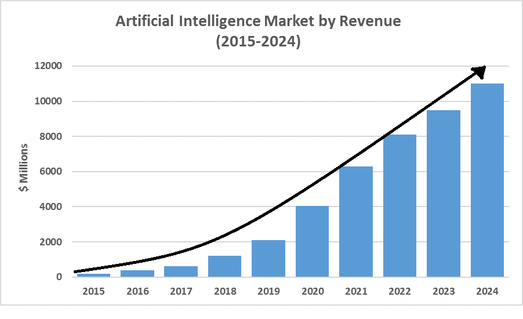 East Asian Quandary
One burning question arising amid the entire Asian deep-learning build up is why the East needs to come West to buy AI.

If startups are fueling the new ideas behind AI’s deep learning and if neural nets are critical to the Industrial Internet of Things (Industry 4.0 in the EU), Asia, sooner than later, will need to develop a culture that nurtures the birthing and incubating of the stuff that is to make Asia great.

Or, does it really need to?

Although it was in academia where Krizhevsky at the University of Toronto and Ng at Stanford gave neural nets its initial liftoff, it’s from startups (DeepMind and a cohort of others) that AI has generated the great follow-on ideas (See:Symbiosis on the Factory Floor). It is the same startup ecosystem upon which tech giants like Google, Baidu, Facebook, Microsoft, and Alibaba have feasted since 2014.

With a few exceptions, this very necessary AI startup system is not very much in evidence in Asia.

Iris Leung asks the question in the title of her Forbes piece: Why Aren’t There More AI And Machine Learning Startups In Asia? “Activity in Asia has been decidedly quieter,” she writes, “with AI research and development mostly happening at the institutional and corporate level.”

Tak Lo, leader of Zeroth, a new Hong Kong-based accelerator for AI and machine learning, “thinks it might be a pipeline problem which starts at the early stage of startup growth.”

“I think the quality of AI research and development between Asia and the west is very even. What’s missing is the volume,” says Lo. “In the Valley, for example, everyone is doing AI and Machine Learning stuff. In London, you definitely see a lot of the same volume. In Asia, the technical expertise is there, but we need to increase the opportunities for these founders to come out and for ideas to be developed.”

Is buying AI abroad sustainable for Asia? Surely, startups with great ideas and great tech can only go so far without the “training data” for their tech, which the Google’s and Baidu’s of the world have aplenty. Eventually then, to prove itself, every startup needs the monster, deep-pocketed conglomerate. AlphaGo’s playing millions of games of Go needed Google, for example. The smaller Deep ZenGo algorithm, without a Google-like partner, lost to Korean master Cho Chikun.

Are we seeing the evolution of AI forming itself in a new way? In short, there might never be an Apple of neural networks because none of these tyros has the data—like the 850 million users Face++ found in Meitu.