Keeping an eye on the prize
The Korea Times called it the “AlphaGo Shock” while IntellAsia wrote “the impact on the national psyche was profound,” which prompted a state of tech panic whereby the government quickly scrambled around to ante up $863 million in artificial intelligence (AI) research funding over the next five years (2016-2020).

Then on November 23, Jiji Press reported that Go master Cho Chikun bested the AI program DeepZenGo, a Japanese artificial intelligence program, two games to one in a three-game series.

The DeepZenGo shock was just the opposite of AlphaGo: humanity had made a comeback. Hooray for us.

Should Korea still be in panic mode over AI? No. Should Korea be thinking hard on how to get into the AI game? You bet!

AI surprised everyone on the planet long before it whipped Go master Lee Sedol. The lesson learned: Going forward, Korea should never ever be surprised again at what AI can or cannot do.

As Youngah Park, president of the government think tank, the Korea Institute of S&T Evaluation and Planning (KISTEP), put it, Korea has long been an“industry-focused fast follower” that excelled at “quickly adopting technologies and products, such as semiconductors and smartphones, and making them better and cheaper.”

AI, although software and not hardware, should be approached in classic Korean “fast-follow” fashion.

According to Nature, Korea leads the world in R&D spending; has the highest proportion of researchers per thousand citizens; is the world leader in patent applications; and Korea (11) outranks its East Asian rivals Japan (16) and China (25) in the 2016 Global Innovation Index, which measures the world’s 25 most-innovative economies.

Previous to the AlphaGo defeat, Korea’s vaunted R&D machine had made a wimpy effort at artificial intelligence. As reported by Jeong Eun Ha, Officer for Innovation, Technology and Science at the Dutch Embassy. “Some of the large IT companies are investing in the AI, but this is still limited to some of the internet portal or game related companies. For instance, NC Soft (a Korean large game company) and NAVER (a Korean internet portal company) have been researching and developing AI for several years.

“On the other hand, the Ministry of Science, ICT and Future Planning (MSIP) has been investing in Exobrain software development from 2013. This software provides knowledge reinforcement learning service by accumulating and self-learning the big data information.”

Okay, that was pre-AlphaGo. Not the greatest putting forth on a technology with such vast potential.

Post-AlphaGo, the Korean AI world is supposed to dramatically change. How so?

In March 2016, Korea’s President Geun Hye Park (herself an engineer) and twenty invited AI specialists met at the Blue House to formulate some sort of AI response.

Park announced that the country will form a “control tower of AI” to be named the Science and Technology Strategy Committee.

The MSIP will direct the Science and Technology Strategy Committee to come up with a plan for tentative next steps with AI. The plan is where the initial $863 million in artificial intelligence (AI) funding will be spent from 2016 to 2020

Added to that, another $2 billion “will be invested by the private sector such as Samsung Electronics, LG Electronics, SK Telecom, Korea Telecom, NAVER, and Hyundai Motors.” The goal would be to establish a joint research lab for the development of a fledgling AI industry.

According to the plan, such a joint lab would have five key activities:

With Samsung taking part in that lab, would it share its latest acquisition of Viv (Siri on steroids, developed by Dag Kitlaus, who also developed Siri and sold it to Apple)? Will we see Viv in LG’s refrigerators or the Hyundai Sonata anytime soon?

The wake-up call comes late
The best in Japanese AI and deep learning isn’t in Japan but in Silicon Valley.

The U.S. is where Japanese conglomerates have hastily setup R&D facilities over the past two years with the hope of playing catchup. Toyota will invest $1 billion in its Silicon Valley Toyota Research Institute in hopes of dashing ahead in AI and robotics. Hitachi being the latest (November 2016).  Hitachi chairman Hiroaki Nakanishi plans a “core operation with a team of 6,000 and a newly established base in Silicon Valley.”

Yutaka Matsuo, a researcher in AI at the University of Tokyo and advisor to the government, “warns that when it comes to using AI to deal with information-oriented tasks, (e.g. understanding natural language, economic analysis, expert systems, predicting customer desires), Japanese companies have fallen behind US rivals.”

Matsuo was brutally blunt when he opined on Japan’s AI future at a press briefing this July: “And though there are still areas open to competition, Silicon Valley venture start-ups are entering the field, thereby further increasing competition from the US. Consequently, when it comes to competing for a place in the current global AI arena, ‘Japan has no chance,’ said Matsuo. ‘We should give up.’”

Matsuo’s suggested change in tactics is for Japan to do what it does best, and use AI to achieve that goal.

Matsuo advises “Japan to play to the natural strengths of its workers, which include painstaking care to detail, careful planning, diligence and a conscientious work ethic. These national traits can be channeled to help develop and integrate deep learning into monosukuri: a Japanese concept that can be understood as the art and craft of making things, and which accounts for much of the respect Japanese manufacturing has garnered around the world.”

Seems hard to get blunter than Matsuo, but a U.S. VC made a stab at it, saying of the challenges faced by corporate Japan: “It’s like walking through a graveyard. Terrible demographics, no innovation, smacked around by the US, China and Korea.”

Mitsuru Ishizuka is a professor at Waseda University and professor emeritus at the University of Tokyo has been working in AI at the latter institution since 1980.

“Mitsuru admits that Japan is considerably behind the United States in “deep learning,” a central technology in AI, although the country is working hard to catch up. For instance, the government has established a new AI research center, and is planning another one to promote AI in the country.

As he points out, big data is key for deep learning, and Japan lacks the expertise and financial strength of US multinationals such as Google Inc. or Facebook, Inc.”

Nevertheless, AI in Japan still has a pulse. Such an application as Matsuo puts forward would have a natural ally in Japan’s assault on the Factory of the Future and the Industrial Internet of Things (IIoT), which a small AI community in Tokyo is trying to service.

One such provider is Tokyo-based Preferred Networks (founded in 2014). It’s described in ChrunchBase as a research company engaged in: “network aspects as well as solves problems in the areas of data analytics, edge-heavy computing, distributed intelligence, machine learning, deep learning, and computer vision activities.”

Toru Nishikawa, CEO of Preferred Networks (PFN), has guided his deep-learning startup into deals with Japan’s top manufacturers: Toyota bought 3 percent of PFN for $8.2 million; FANUC took 6 percent for $7.3 million [seems Toyota paid more for less!]; and PFN has already begun working with Nintendo’s Smartphone games by partnering with game provider DeNA (owner of the Mobage platform, which is one of the most popular cell phone gaming platforms in Japan).

High praise for Nishikawa’s startup comes from FANUC’s CEO Yoshiharu Inaba: “We believe the PFN is the world’s most advanced in terms of deep-learning expertise.”

For Japan the odds are harrowing. Venture Scanner shows the U.S. way in the lead with 500-plus AI firms while the U.K. is a distant second with 60. Quality is important as well: Google’s score of its AlphaGo builder is the U.K. firm DeepMind Technologies.

Admirable is the plan by Japan’s Ministry of Economy, Trade and Industry to spend $172.4 million to build a new supercomputer for AI research. Its awesome computation speed of 130 petaflops (that’s 130 quadrillion calculations per second) won’t begin to be built out until 2017. That’s a long ways away!

Currently, “China holds both the number one and the number two spots for the current fastest supercomputers, with the top system, the Sunway TaihuLight supercomputer, and coming in at just over 93 petaflops.”

Japan’s best bet for the near term is to pull out its well-stocked wallet and to buy some of these 600 AI firms that are on the leading edge of the direction that Matsuo and Mitsuru think Japan should go.

China did it, buying some two dozen foreign AI firms in order to start out on top and to stay there. Or, partner more closely with Apple’s Yokohama City Tsunamshima artificial intelligence site.

Bottom line for Japan: Get crack’n, because the Factory of the Future will be a hollow place without AI.

How did Newton put it: A body at rest stays at rest unless acted upon by a force. 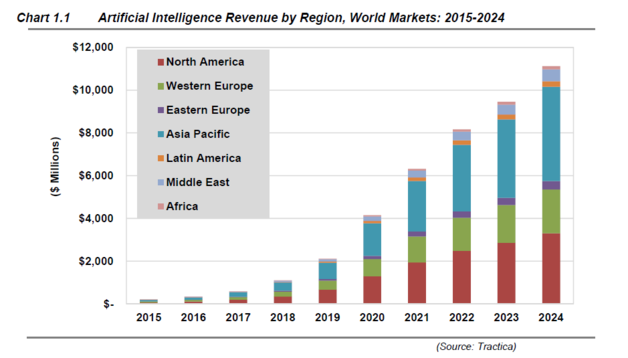