Poised to "leapfrog to the forefront"

It’s like China all over again! From $36B to $55B near term, Southeast Asia’s 600 million consumers acquiring a taste for e-commerce

Given this flood of new online buyers, what’s the outlook for logistics in getting goods to the doorsteps of these millions of new and relatively new online buyers? Logistics in Southeast Asia is a work in progress, but oh, the opportunity is there for success, and quick success at that.

That’s a $19 billion upgrade, which is over $2 billion per year over the eight-year span. 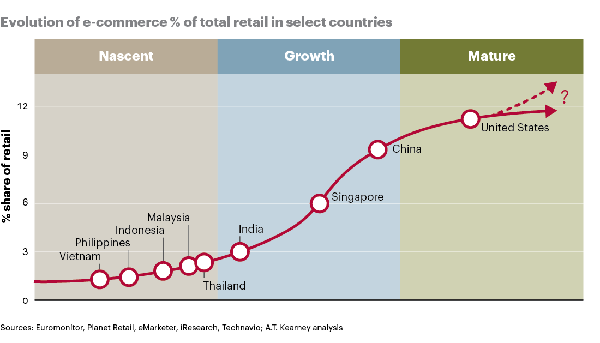 AT Kearney reports that Southeast Asia, especially the 10-nation ASEAN, is poised to “leapfrog to the forefront of the fast-moving global digital economy.” Why the confidence? Probably because the fundamentals are already in place:

Robust economy generating GDP of $2.5-plus trillion and growing at 6 percent per year

Literate population of more than 600 million people, with 40 percent under 30 years of age

Smartphone penetration of around 35 percent, and growing rapidly

Nielsen has predicted that the region’s “middle-class population will reach 400 million by 2020, over twice the size it was in 2012. According to data from the International Monetary Fund, the combined GDP of all ASEAN countries (10 member states) in 2017 amounted to around $2.8 trillion. By the end of 2019, that number is projected to rise to $3.1 trillion.”

“Consumers have bypassed computers and are using their mobile phones to shop. About 20 to 30 percent of those online in Southeast Asia have bought something via the internet in the last 30 days, a similar rate to the United States or the UK.”

“Lim believes that the appetite for ecommerce coupled with a lower cost of production could lead to more manufacturers relocating from China to Southeast Asia.

“China wages are now three to four times higher (than before) while minimum local content laws in some Southeast Asia countries are further driving manufacturers to relocate to these countries to serve the growing consumer populations,” she says.

And just to round out the economic outlook headed toward Southeast Asia, a study by Google and Temasek, reports that “the region’s retail sales are forecast to almost double to $1.38 trillion in 2025 from the $720 billion it recorded last year…and the Internet economy is “expected to exceed $240 billion by 2025.”

Logistics today primed for disruption
The region’s logistics sector is still currently dominated by third-party logistics service providers, “better known as 3PLs, which have traditionally been characterized as asset heavy and labor intensive.”

The logistics sector is ripe for innovation. “While Singapore is ranked seventh globally in the World Bank’s Logistics Performance Index, the rest of the region trails behind. Thailand places next at 32nd, followed by Vietnam (39th), Malaysia (41st), Indonesia (46th) and the Philippines (60).” 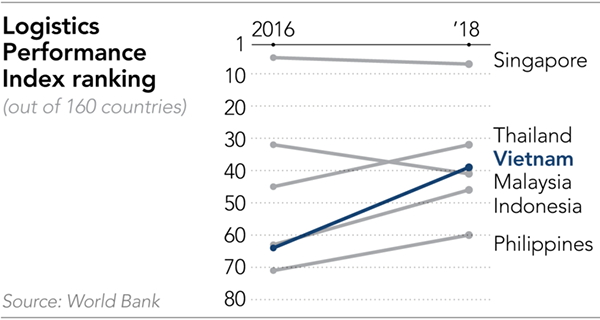 The “Lazada Way” as a model?

Southeast Asia is one of the last major unclaimed e-commerce markets in the world, with no dominant player. So, what kind of form factor is needed in Southeast Asia to succeed in addressing the logistics needs of its 600 million consumers, multiple countries, languages and cultures spread out over four time zones?

Alibaba is betting on Lazada to build out an Amazon-type presence in Southeast Asia. Scooped up for $2 billion by Alibaba between 2016 and 2018, Lazada has been helmed since December by Lazada veteran and MIT-trained engineer Pierre Poignant.

According to Bloomberg, Lazada’s logistics footprint is larger and headed towards the gargantuan: Lazada has “31 fulfillment warehouses scattered around Southeast Asia and an outsourced fleet of planes, trucks, motorbikes and bicycles that can get packages to customers in as little as 24 hours in big cities.”

Of course, it’s all far from automated, but it’s in place, and with the help of Alibaba’s logistics arm, Cainiao, Lazada has a huge leg up on the competition.

Lazada has also staked a claim to groceries, “in 2016 acquiring RedMart, a startup that’s become a leading e-grocer in Singapore. It intends to take that business to at least one more country this year,” Poignant said.

These assets have helped turn Lazada into the region’s largest e-commerce company as measured by traffic. In the last quarter of 2018, it attracted 183.4 million monthly web visits in six countries, according to the research consultant iPrice.

Although the Lazada Way looks primed for success, things can happen quickly to adversely affect its upward trajectory. With 20 to 30 percent of those online in Southeast Asia having bought something via the internet in the last 30 days, and with e-commerce ready to skyrocket across the region ($240 billion by 2025), Lazada will need much more firepower to dominate for very long.

And Alibaba’s presence in Southeast Asia goes beyond backing Lazada. The firm also invested $1.1 billion in Tokopedia which competes with Lazada in Indonesia, Southeast Asia’s largest economy and the world’s fourth most populous country.

One thing’s for sure with any of the logistics challengers, Southeast Asia will need to do much better in the  World Bank’s Logistics Performance Index than it has in the past. Languishing in 32nd place or 39th place simply won’t cut it.