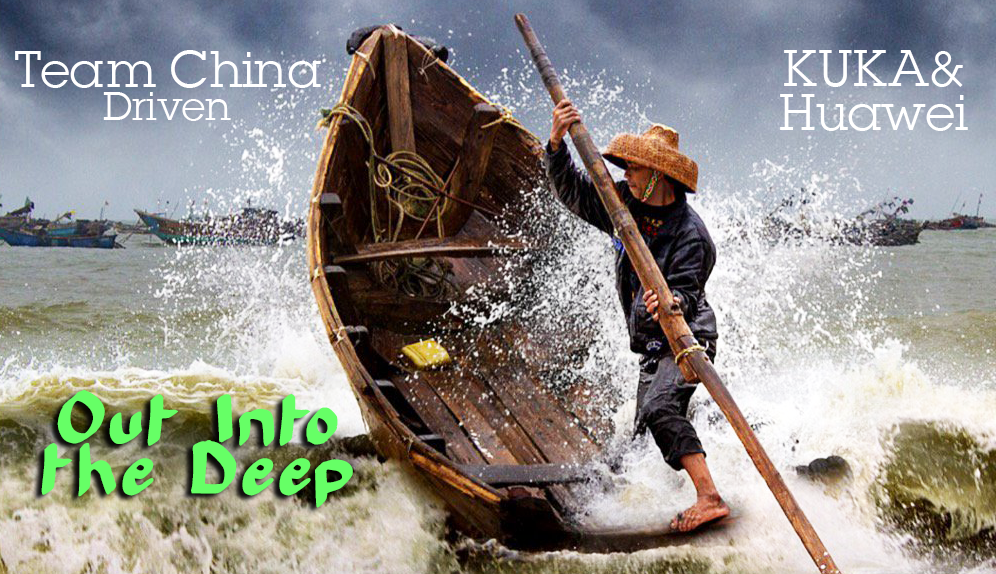 China Races to the Factory of the Future

How does Germany’s vaunted robot tech and Huawei’s vast ICT chops match up with Team Japan?

Long march at a quick pace, please
It should come as no surprise to any foreign manufacturer of robots operating in China that their time is growing short.

The great Chinese buffet is closing down. It will soon become more and more difficult to sell their robots…at anywhere near the profit they’ve been realizing from their machines, and in particular, their robot parts.

Already the largest buyer in the world of industrial robots—for two years running (57,096 (2014) and 66,000 (2015))—China has now taken a new look at this unfavorable relationship, especially since domestic Chinese robot manufacturers’ share was only 16 percent. Although forecast to grow to 45 percent, that’s still way too expensive to deploy robots over a continent-size country with 1.2 billion consumers.

Foreign auto brands got out of hand on China to the detriment of domestic car manufacturers, and that’s a lesson learned that won’t be repeated. Besides, this time around it’s not like choosing between a Geely Panda and a VW brand, this time it’s all about manufacturing, which is core to everything.

China, with its millions of factories and billions of machines, is pivoting in a new direction that does not include dependence on foreign manufacturers who exchange their robots for billions of renminbi, which are then promptly exported home for safe keeping.

The Japanese see the handwriting on the wall, and are already taking action.  “Japanese companies no longer see China as a top destination for investment, and are overwhelmingly turning to India and ASEAN for growth”, according to a joint survey by Nikkei Inc. and the U.S. think tank Center for Strategic and International Studies.

And by far, Japanese robot makers have the most invested in China…and thusly the most to lose.

See related:Japan Gets Cozy with Thailand

“When asked the best strategy for Japanese companies doing business in China, a combined 55 percent called for either withdrawing or cutting back their China operations.”

So what is this Chinese pivot all about? China is going to make a dash for a commanding lead in the Factory of the Future. ​

Maneuvering for standards
Getting there first is not such a concern for China, but getting there with an overwhelming presence holds one of the great prizes for the coming Industrial Internet of Things (IIoT): standards.

Simply put, there is a lack of overall global IIoT standardization, so whoever gets there first with a commanding IIoT tech presence will undoubtedly be the one who sets the standards for the Factory of the Future.

Jagdish Rebello, IHS Consulting Services, told the Economist “that a push from Chinese regulators, combined with the country’s massive home market, could lead to domestic standards dominating the global market.”

In fact, when it comes to device-to-device connections China is already world leader, and is poised to put lots of distance between itself and even its closest of today’s competitors by 2020 (see chart below). 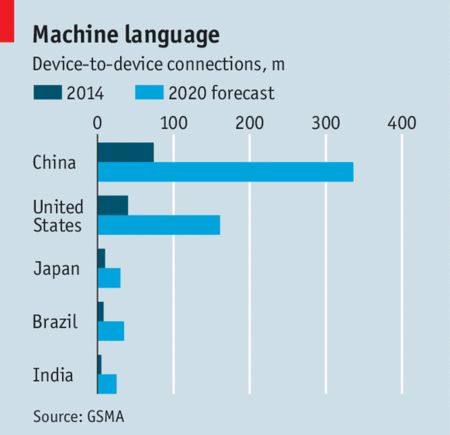 The Economist tabs it “a sort of technological Galapagos Island, a distinct and isolated environment in which local firms flourish.”  That, combined with the current Five-Year Plan (2016-2020) that puts robots way up at the top of must-haves, plus what Japan calls “Xi Jinping administration’s ‘tough and adversarial’ policies, make for a perfect atmosphere for a Chinese run at both the Factory of the Future and standards.​

What it lacked was a top-rated, best-in-class robot manufacturer. Sure, it has an excellent domestic manufacturer in Siasun, but China needed one of the Big Four (FANUC, Yaskawa, KUKA or ABB) in order to be a convincing rival for the big prizes in manufacturing that lay ahead.

After talks with Yaskawa broke down in May (2016), China’s proxy buyer,Midea, a giant manufacturer of home appliances, flew into Augsburg, Germany for a chat with the vaunted German robot manufacturer, KUKA. At the time, Midea already owned 5 percent of KUKA.

As the favored robot producer in its “technological Galapagos Island”, KUKA, with 2015 revenue of $3.3 billion, could well realize an order of magnitude increase in sales into those millions of Chinese factories. Publically traded,KU2.GR, KUKA could also well expect a considerable bump up in the sale of its shares.

As of mid-July (2016), Midea owned 86.49 per cent of KUKA. That gave China the keys to the kingdom as a world-class competitor for the Factory of the Future crown.

In one fell swoop, China’s KUKA acquisition gives it access to valuable technology that will help to reduce manufacturing costs, and most certainly will enhance its global image. All for the comfortably generous price of $4.48 billion, which was 35 percent above KUKA’s then share price of $94.​​​

And although as Jost Wübbeke, head of the economy and technology program at the Mercator Institute for China Studies contends: “In the medium term, agreements between the two enterprises will prevent a technology transfer,” the reality of such a tech block is truly naïve, or maybe it exists merely for public relations purposes more than anything else.

What’s at stake here is nothing short of the global future of manufacturing as well as the economic health and livelihood of China. Nothing is going to stand in the way of that juggernaut. Circumventions—legal workarounds—are, more than likely, already in development.

For KUKA and its shareholders, the aspect of trebling its annual revenues almost overnight must be heady stuff. And beyond that, its future potential fortunes are truly dizzying.

For KUKA not to grab hold of this golden ring and to wholeheartedly run with it would border on insanity. Forget pleasing shareholders or the media, this opportunity is an entire continent served up as its private domain, with buddies like Huawei and ZTE to help pump up KUKA’s less than adequate ICT chops.

The tech associations from this KUKA-China marriage will inure to advancing KUKA’s already stellar innovation and technical prowess. Imagine being the one robot company that powers China’s assault on the Fourth Industrial Revolution? Like Kleenex is to tissue, KUKA could well become a synonym for robots because of it.  Beyond making money, such a challenge is powerful and exciting for any technical staff, and could well jack up KUKA’s vaunted innovation machine all the higher.

Better still, KUKA has a fabulous dowry to tote eastward: a treasure chest of intellectual property (IP); a superb technical staff (birthed from a tradition that goes back to 1898 with KUKA’s founders Herren Keller and Knappich); KUKA-owned Reis Robotics, the half-century-old robot maker that also has an existing presence in China; and the recently acquired Swisslog ($357 million in 2014) with its extensive healthcare, warehouse and logistics robotics. Plus, beyond all the tools and acquisitions and skillset, there is KUKA’s world-class customer base that runs the gamut from Boeing to Wal-Mart.

In reality then, under $5 billion was a steal. China has paid much more for much less.  All $5 billion pales, of course, when seen in relationship to what the future holds for Team KUKA-Hauwei in China.

Huawei Technologies ($46 billion in 2015) is led by Ren Zhengfei, its founder and CEO, who is the one who established the 50-50 staff split. With all those engineers, Zhengfei feels that Huawei can engineer anything, which the company has consistently proven over the last decade. And in an age where CEO’s are driven solely by increasing value for investors, privately-held Huawei, is far from greedy. As Zhengfei remarked during an interview at Davos: ““We always say, we divide the watermelon in eight pieces and we only want one piece.”

The boundless intangible with Team KUKA-Huawei is the allure of their end product—the Factory of the Future.

Technology is in a fast-approaching trajectory to “the world of smart factories, which will replace laboratories as hubs of innovation. New tech inventions as well as process improvements will derive from the machines themselves during the course of manufacturing.

“As Asia leapfrogs the laboratory for the factory floor, it will gain an edge in innovation, the speed of innovation, patents and other intellectual property, and the speed of technology transfer from innovation to real-world practice.

Team China: KUKA-Huawei is late
Team Japan: FANUC-Cisco is way out ahead in the race to the Factory of the Future and already making lots of money: $38 million claims Team Japan.  Trillions of dollars are at stake.

“But as we’ve seen with Team Japan, building out the Factory of the Future can be done in a hurry. Most all of the pieces already exist. Vitally necessary is the will and capital to get underway as well as the innovative skill to put the pieces together in the right way…without too many technical stumbles.”

It’s not a long race, but there’s always a chance to get in and do well.

KUKA-Huawei having yet to even constitute their team must act fast. The team needs then to fight through the surf and make for deep water where it can realize its full potential.