Third of a 3-part series on Canadian robotics

On the road to find out: Toronto/Montreal to the Maritimes

Twin towers
The train trip between Toronto’s Union Station and Montreal’s Gare Centrale takes a shade over five hours to complete the 330 miles.  However, in view of the amazing level of artificial intelligence (AI) activity burgeoning up equally and simultaneously in both cities, Toronto and Montreal may as well be side by side. Twin towers, if you will.

In fact, if Toronto-based Transpod has its way, a hyperloop between the cities in 2020 will scrunch the distance between Toronto and Montreal down to a 5-minute commute. Virtual twin towers is then a distinct reality.

Mind-boggling it is that just a few short years ago terms like AI, hyperloop, and Canada all lumped together would have been a totally alien concept to even consider. …Not any longer!

And things get wilder when Google’s Sidewalk Labs suddenly wants to build a big chunk of North America’s first smart city on 12 acres of Toronto’s waterfront. Pledged already is $50 million for the project’s first phase, “though development could cost at least $1 billion.”

The Province of Ontario plus Google plus Facebook are stuffing the pockets of Toronto’s Vector Institute with $150 million.

The government in Ottawa put up $213 million to fund AI and big data research in Montreal; its provincial counterpart in Quebec has earmarked $100 million for an AI “super-cluster” in Montreal. Plus, Facebook, Samsung and Microsoft are also in town looking to spend millions more.

It’s what prompts global admiration like this editorial: Singapore Should Look to Canada to Become a Leading AI Hub penned by CEO of Singapore’s Marvelstone Ventures. Or, like influencing London’s Daily Telegraph to do a three-part series on the explosion of AI research and startups in Toronto.

It’s inescapable: Something curious good is going on in Canada. And it’s fun to watch.

The fallout from all this giddy AI spending will inure to the benefit of robotics, smart factories, the IIoT, and automation in general worldwide. Hopefully, Canada will find a way to institutionalize this new-found celebrity, exuberance and money, and make it permanent.

Certainly no one above the 49th parallel wants this to go away anytime soon, or worse, become an historical footnote like the Klondike Gold Rush of 1896 that lasted all of two years before going bust.

“Canadian Mafia”
If you could boil down the credit for creating this Toronto/Montreal nexus of AI, two names pop out as founders: Geoffrey Hinton, professor emeritus of computer science at the University of Toronto and engineering fellow at Google, sometimes called the Godfather of AI, most notably for “training neural networks with multiple layers, a computing technique that provides AI with greater recognition capabilities”; and, Yoshua Bengio, a McGill University PhD and faculty member at the Université de Montréal, heads the MILA (Montreal Institute for Learning Algorithms), is co-director of the Learning in Machines & Brains project of the Canadian Institute for Advanced Research, and adviser to Microsoft in artificial intelligence.

Seems the twin towers have twin founders, and together with a cohort of similarly gifted AI researchers, are known in the synthetic thinking biz as the “Canadian Mafia”.

Like MIT, CMU, and Stanford, the expectation of the twin towers is to not only produce more bright lights for AI research— but also to spawn spinoff companies with AI products near-ready of ready for the marketplace. And that too is happening faster than anyone thought.

One recent spinoff, Element AI, a Bengio & company AI factory, looks to “bring entrepreneurs and academics together and help them incubate advanced AI-First solutions,” according to its CEO and resident mafiosi, Jean-Francois Gagne.  “We’re going to enable a lot people to tackle problems that otherwise would be impossible for them to think about,” adds Gagne.

“Founded in late October of 2016, the new AI company has grown from eight employees to 160 in less than a year (looking to hire 250 more!), and has pulled in $135 million in investment from the likes of the Business Development Bank of Canada, Intel, Microsoft, Hanwha, NVIDIA, and the Canadian venture capital fund Real Ventures.” Element AI has customers, and claims to have a hundred-plus RFPs waiting for replies. Not bad for a one-year-old AI newbie!

Medical robotics
Away from the bright AI glare that’s grabbing everyone’s attention and scooping up piles of investment dollars, Canada has also established itself as home to a highly skilled and potentially lucrative industry in surgical robotics and intelligent, assistive, robot medical technologies.

Allied Market Research is forecasting sales of global surgical robotics to top off at $6 billion in 2020, carrying a CAGR of 10.2 percent along the way. Rehab and assistive robots, according to NASDAQ Newswire, are looking at a worldwide marketplace of $400 million by 2024, up from $70 million in 2015.

With populations ageing quickly, especially in developed countries, combined with skyrocketing healthcare costs, the lack of trained patient-care professionals, and staggering stats like those from the Lancet for 325 million surgeries necessary worldwide, or 15 million annual stroke victims, and 10 million in wheelchairs, the medical market for robotics could easily treble over the next decade.

Combined surgical and medical assistive markets for robotics is expected to reach $20.56 billion by 2022 from an overall $6.36 billion in 2016.

The Province of Ontario has a trio of medical robotics offerings that could impact healthcare and score significant market share in the run-up to 2020.

Toronto’s youthful Titan Medical is looking toward global leadership with its SPORT surgical system’s versatility in single and multi-quadrant surgeries. Titan, after its first installed robotic surgery system in Florida, announced the completion of its first preclinical feasibility and validation studies. According to CEO David McNally, Titan anticipates commercial release in 2019.

On the rehab side of healthcare, Toronto, boasts Bionik Laboratories, which provides “rehabilitation solutions to individuals with neurological disorders” via its recently acquired Interactive Motion Technologies. In development as well is ARKE, Bionik’s lower body exoskeleton “which allows paraplegics and other wheelchair bound individuals the ability to rehabilitate and to walk.” 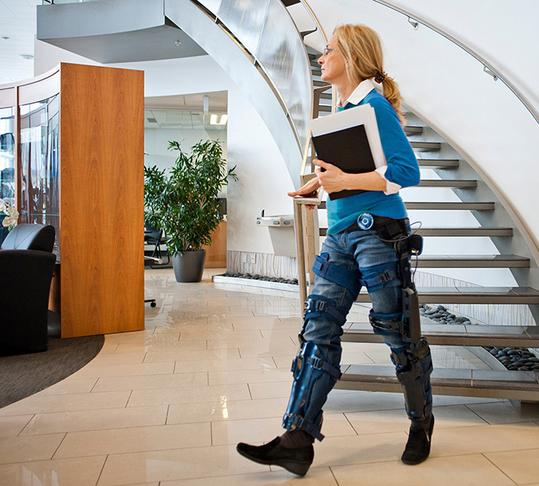 Anatomical Quebec
The Province of Quebec has an interesting proclivity in robot building that revolves around developing robotics that mimic or enhance human anatomy. Across the province there are a number of builders specializing in robot arms, legs, knees, and hands for a variety of medical as well as industrial purposes.

It’s Canadian robot building at its most practical: enabling or enhancing the basics in physical labor, mobility and manipulation.

Victhom Human Bionics, now in association with Ergoresearch, invented the world’s only motor-powered prosthesis, Power Knee, which is licensed to Ossur for global sales.

B-TEMIA is the maker of Keeogo, a lower-body walking assistance device, providing technology for leg power to help individuals with “mobility related challenges.”

Robotiq has a passion for making hands—a/k/a grippers or end-of-arm tools for industrial robots. Since robots and cobots are born without hands, grippers like Robotiq’s “hands” are essential at enabling manipulation to perform work tasks.

And yes, even the high-voltage world of Hydro-Quebec’s Research Institute has a knack for the use of hands and arms. LineScout is a one-of-a-kind robot that “uses cameras to inspect line conditions…while also employing a smart navigation system to pinpoint locations in need of attention.” Moving along high-voltage transmission lines [2000 amps, 735 kilovolts] from tower to tower LineScout avoids obstacles by deploying arms that move it over any obstacle in its path.

Under the Atlantic
Where the North Atlantic washes the Maritimes, Canada has a bright future in a bright new industry: AUVs or autonomous underwater vehicles.

Overlooking St John’s Harbor is Canada’s entry into sub-sea intelligence, Kraken Robotics Systems, Newfoundland (founded in 2012), offering software-centric sensors and underwater robotic systems.  For the fifth year in a row, Kraken made the list of the 100 most influential companies in the international marine technology marketplace and as one of the top 17 technology disruptors in the marine technology industry.

Recently, to deploy its SAS systems, Kraken began building its own autonomous underwater vehicles (AUVs). Thunderfish is the first. On October 27, Kraken announced a partnership with Avitas Systems, a GE Venture, which handles inspection services for oil and gas customers.​ 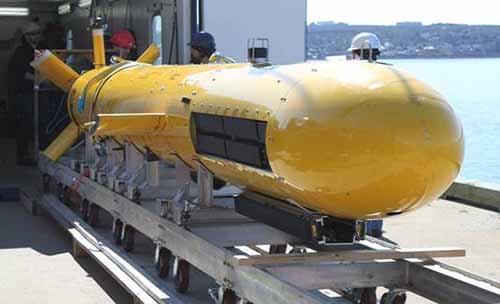 See also:
Second of a 3-part series on Canadian robotics
Canadian Robotics: Ingenuity and Practicality
On the road to find out: Vancouver to Waterloo