First of a 3-part series on Canadian robotics

A robotics ecosystem that was always very good is now wow! Why?

On the road in Quebec
Something curious is going on in Canadian robotics: It’s exploding, in a very good way. This second largest country in the world by area, with a miniscule 36 million people for its massive size, is churning out an incredible array of robotics companies way out of proportion to its population density: At 8.8 people per square mile, Canada’s density ranks with that of Australia or Iceland or Botswana. Yes, Botswana!

Long known in robotics, at least since 1975, essentially for its family of robot arms in the sky—Canadarms 1, 2, and 3—the hulking, multi-articulated stevedores for NASA Space Shuttle orbiters and the International Space Station—Canada has, with little fanfare, built out a remarkable robotics ecosystem of world-class technology. 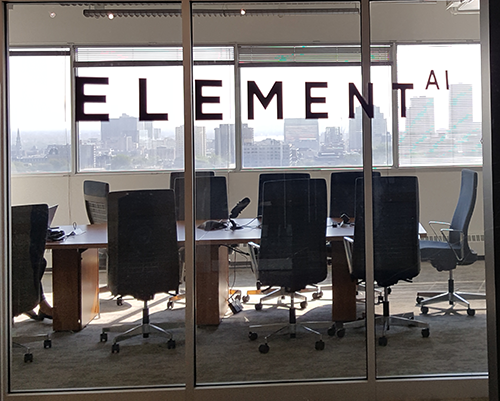 Studded clear across the nation’s 2700 miles from British Columbia to the Maritimes are dozens of newbies, startups, and semi-established developers that have made their appearances on the robotics scene mostly since 2007 or so. Basically, a skinny decade that has rocketed Canada into a trajectory that’s exciting and fun to watch as it soars.

Waterloo, where?
I first took note of and began writing about Canadian robotics in 2012 when researching an article on the then-little-known Clearpath Robotics from Waterloo, Ontario, and its Husky unmanned ground vehicle.

What I noticed was a bubbling up of Canadian robotics tech that I felt bore closer scrutiny.  I sent freelance writers north to look for themselves and maybe to confirm or to temper what I was seeing. They returned with articles more enthusiastic than mine. Okay, I wasn’t going balmy! These Canadians were kicking high-tech butt from coast to coast, and it was very cool to see this mostly nascent ecosystem on the grow. I had a front-row seat!

Last Friday, I returned from six days of a robot road show consisting of robots of all types, artificial intelligence (AI), and quantum computing that took me from Quebec City to Montreal, and which massively reconfirmed what I think is happening in Canadian robotics: It’s reached critical mass, which has created wide-scale recognition of its tech, which has, in turn, spawned a massive inflow of private, and now government, investment millions. I think I said the word awesome six or seven hundred times during the course of the trip.

What we’re seeing ushering up is the beginning of what I’d like to call the Golden Age of Canadian Robotics. Seriously! I think Canada is on a roll that will only grow bigger, wider, more robust, and that Golden is only a burnish or two away.

Promote, promote, promote
I shared that Golden Age appellation with Canadians on my robot road trip, asking dozens if they agreed with me or not. Surprisingly, I got a fifty-fifty response from the mostly quiet and humble developers and researchers to whom I posed the question. Such humility, of course, needs some upgrading: they’ll need to be as adept in self-promotion as they are with their tech…or better get someone to do it for them. Promotion after all is crucial in order to get and maintain market attention, which can be fleeting under the churn of global competition.

The classic example is the post-WWII computer industry in the UK, with all of its great genius for computing at Bletchley Park, failed at promoting itself, which bred neglect and lack of funding, which Thomas Hendry amply chronicles in, Innovating for Failure: Government Policy and the Early British Computer Industry.

It’s a fate unlikely to befall Canadian robotics what with the great jump on recognition and cash it has received over the last two years. But, as the saying goes, got to keep the pedal to the metal.

Case in point: A TV crew from the CBC accompanied the Montreal leg of our robot tour. Vincent Maisonneuve, the CBC journalist, was intrigued when he overheard me mouthing off on the Golden Age theme. He asked to interview me on some of the specifics. I got a chance to lay out the case in some detail. However, I’m now back in Boston and the story needs someone in Canada to push it along.

Late that same afternoon, with the CBC crew gone for the day, I met the perfect Canadian pitchman: Pierre Dumouchel, whose encyclopedic grasp of Canadian tech is remarkable and who would have made for a super CBC interview.

Dumouchel, Director General of one of Canada’s leading universities of engineering, the École de technologie supérieure (ÉTS), is a believer in the Golden Age of Canadian Robotics. As examples, he rattled off a string of manufacturers, laboratories and universities with spinoff companies, government and VC investments, as well as his roadmap on how and when to nurture the Golden Age along.

The next CBC interview on the topic could easily benefit from a chat with Dumouchel; he’s got the nation’s entire high-tech, market-worthy skills and potential in his mental Rolodex, and he’s more than happy to expound on it at length. In fact, if the movement needs a point man to pull together all the disparate elements of Canadian tech, Dumouchel might be a good choice to be its czar.

Element AI
One of his favorite topics is an artificial intelligence (AI) newbie based in Montreal called Element AI, which I had visited that morning. Founded in late October of 2016, the new AI company has grown from eight employees to 160 in less than a year (looking to hire 250 more!), and has pulled in $135 million in investment from the likes of the Business Development Bank of Canada, Intel, Microsoft, Hanwha, NVIDIA, and the Canadian venture capital fund Real Ventures.

Amazingly, the AI tyro already has an impressive list of paying customers at the ready, plus 200 inquiries from other potential customers. Their biz model is simple and straightforward: They aim to be “a trusted partner for enterprises that want to start using artificial intelligence but don’t have massive teams of data scientists with deep expertise.” Element AI offers specialties geared toward robotics, industrial manufacturing, cybersecurity, and financial services. That’s a broad list that could include just about anyone. Obvious competition: IBM’s Watson group.

Co-founded by algorithm pioneer and impresario Yoshua Bengio, head of the Montreal Institute for Learning Algorithms, Element AI is growing fast, and needs to.  “If we want Canada to be a leader in AI, we need to have companies like Element AI which can grow fast, because this is such a fast-changing scene,” Bengio told CBC News.

Spirited, smart and savvy, the young AI company, not yet a year old, is following Bengio’s advice to move fast: It’s spinning out offices in Toronto and Singapore early next year.

In Toronto, it’ll be close to the newly-formed Vector Institute at the University of Toronto, which is under the guidance of chief scientific adviser, Geoffrey Hinton, another of Canada’s AI pioneers and most recently a Google VP. Hinton’s back in Toronto to guide the Institute and to recruit more brainpower to its ranks. The Vector Institute gets to share $125 million in government support with two other AI labs (Montreal and Edmonton).

The impact of AI on robotics, already substantial, will grow exponentially as perception, cognition, and action for robots, factories, and warehouses makes them smarter and more able. Canada could well play a significant role in the global, multi-billion dollar push in robotics, factory automation, and logistics.

Instead of the usual demos and presentations, Sam Bouchard, CEO of Robotiq, transformed the event into a hands-on working session for all attendees. Dividing the group into eight teams, with the hotel ballroom outfitted as an eight-cell, forty-robot factory floor, the attendees competed in using their five robots to transform a manual process into a robot cell for automated assembly. 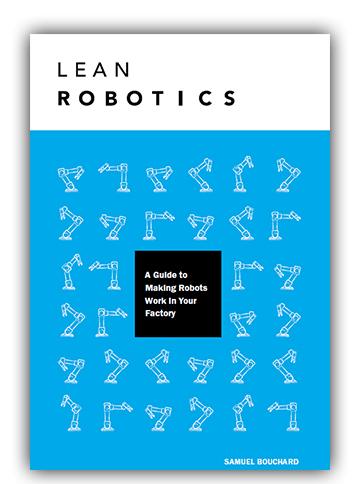 The new field of “Lean Robotics”
Another very different wrinkle to the Robotiq User Conference was Bouchard taking the opportunity to launch his new book: Lean Robotics, which is a first-ever “lean” manufacturing topic that specifically addresses robotics.

“The people working in a factory are the ones who best know how to automate their processes,” said Bouchard, reflecting on his motivation for writing the 220-page, step-by-step guide. It’s a book built around his experiences substituting automated robot cells for manual processes. “Until now, it’s been hard for them [end users] to find all the necessary information in one place. This book is the complete guide to achieving a successful robot cell deployment.”

From lean robotics to a factory in a hotel ballroom was a uniquely different way to kick off a road trip to Montreal and to immerse myself into Canadian robotics; all of which reaffirmed my contention that Canadian robotics is powering up for a whole new phase in its evolution.

See also: Second of a 3-part series on Canadian robotics
Canadian Robotics: Ingenuity and Practicality
On the Road to Find Out: Vancouver to Waterloo