Second of a 3-part series on Canadian robotics

On the road to find out: Vancouver to Waterloo

What’s next?
I’m sitting in front of a list of 239 domestic Canadian robotics companies, labs and developers. That’s a crazy amount of robotics going on in a country with only 36 million people, which makes Canada’s citizenry fewer than the entire population of Tokyo and three million less than all of California.

That teeny population inhabits the second largest country in the world, with most of that teeming scarcity hugging to the 49th parallel from British Columbia to the Maritimes.

Amazing ratio
If you divide that robotics ecosystem by the total population, it averages out to one robotics group for every 150,000 Canadian citizens. It’s a robotics ecosystem that doesn’t even take into account the high-tech goings-on in artificial intelligence (AI), quantum computing, and information technology (IT)—all of which are on a mega-growth spurt these days, especially AI—and all of which are allied to and critically important to global robotics and the Industrial Internet of Things (IIoT).

According to The State of Canada’s Tech Sector (Brookfield Institute), Canada’s overall tech sector consists of 71,000 firms employing over 800,000 that provide $117 billion in GDP.

Canada’s robotics ecosystem may seem small by comparison, however, the future of Canada’s tech sector to flourish may well depend on robotics.

Canadian robotics strategy
As I mentioned in Part One of this series: Canadian Robotics Muscles into Prime Time: “Canadian robotics has reached critical mass, which has created wide-scale recognition of its tech, which has, in turn, spawned a massive inflow of private, and now government, investment millions.”

It’s not by happenchance that Google’s Sidewalk Labs suddenly wants to build a piece of tomorrow on 12 acres of Toronto’s waterfront with its Quayside Project. Canada is hot, its tech is quite advanced and growing fast, and everyone is piling on trying to grab a piece of that future for themselves.

It’s obvious that Canadian robotics is at a special moment in time and place. What those 239 domestic robotics groups do next is very important.

This NSERC call to action explained the meeting’s purpose: “Robotics stakeholders from across Canada gather at UBC [University of British Columbia] for a full-day brainstorming session to identify Canada’s unique strengths and opportunities relative to the global competition, and to align on a strategic vision for robotics in Canada.”

Robotiq’s Sam Bouchard told the audience that the search should begin by asking: “What unique contributions can Canadian robotics make to the world?”

Well, my list of 239 has some intriguing candidates. A few of them quickly jump out as worthy of consideration: 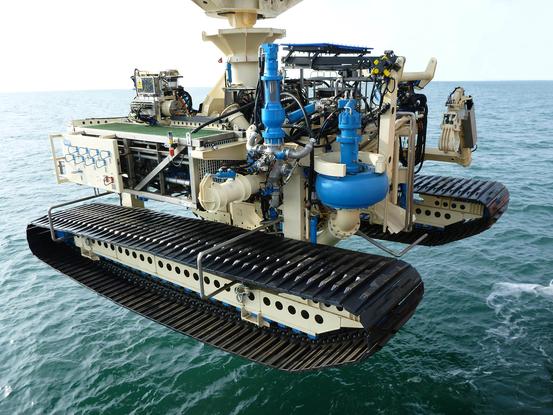 Subsea mining
The best mining resources on the planet aren’t on land, rather, they are under the sea, some 5,000 feet straight down on the ocean floor. That’s where near-limitless amounts of valuable metals like copper, gold, manganese, nickel and cobalt have patiently awaited discovery for 200 million years.

Well, they have now been discovered and will soon be mined by deep-sea robots. On Burrard Street in Vancouver resides the only company in the world with the ability to mine those ocean riches, Nautilus Minerals. Mining is slated to begin in 2019.

Little known in Canada, Nautilus Minerals has created great interest in China. The Nautilus mother ship that will hover above the robot mining activity below is being built by China’s Fujian Mawei Shipbuilding; and the mined ore will be processed by Tongling Nonferrous Metals Group. The monster, deep-sea mining robots built by UK-based Specialist Machine Developments (SMD) was bought for $159 million by China’s CSR Times Electric, a subsidiary of state-owned China Railway Rolling Stock Corporation.

Questing for rare-earth elements
Why all this Sino fascination with deep-sea mining? Maybe it’s all about rare earths (there are seventeen of them), which are also in abundance on the ocean floor.

“You can basically supply all the rare earths you need from the deep sea,” says John Wiltshire, director of Hawaii’s Undersea Research Lab.

“All the big land-based deposits in the world are almost solely light rare earths,” adds Jim Hein, an ocean minerals specialist with the US Geological Survey, “Deep ocean deposits have a much higher percentage of heavy rare earths. That’s the key difference.”

With the world racing to EVs, and with China looking to be a global kingpin in EVs and wind farms, access to massive quantities of rare earths is essential. Hence, the Canadian connection: the globe’s only deep-sea miners.

At Lockheed Martin the D-Wave is used to make aircraft safer by testing “jet software that is currently too complex for classical computers.”

Quantum computing extended into robotics offers up quantum robotics, which is an emerging engineering and scientific research discipline whereby “quantum computing is used to help understand the technical capabilities of robots to sense, plan, learn, and act in dynamic environments.” For example, a quantum robot on Mars could adapt itself and survive, while the classic robot might succumb to unknown elements.

“It means a step forward,” says researcher Miguel A. Martín-Delgado, “towards the most ambitious objective of artificial intelligence: the creation of a robot that is intelligent and creative, and that is not designed for specific tasks”.

Working and prospecting for minerals on the ocean floor certainly qualifies as a dynamic environment for subsea robots, especially when pressure can easily hit 500 atmospheres or 500 times greater than the pressure at sea level.

The possibilities for quantum robots are endless…and they have just begun.

Innovative & commercial in Waterloo
The University of Waterloo (Ontario) didn’t have a mechatronics engineering degree program until 2003 and saw its first graduating class only in 2008, yet the Waterloo Economic Region now boasts five strong robotics companies selling real products to real customers—globally!—which have collectively attracted in excess of $150 million in VC investments.

Add Thalmic Labs to the mix, makers of myoelectric-controlled armbands, which has garnered another $120 million from the likes of Intel, Amazon and Fidelity Investments, and the Waterloo investment total easily tops $200 million.

Most of these investments have flowed into town since 2016, which is interesting because all of these robotics developers are hardware oriented; and hardware good enough to attract investors takes time to build out. All of which points to Waterloo’s population of innovators as being quite brilliant in developing their tech and equally skilled at getting their robotics to market quickly. A rare combination!

We’ll encounter it again, as this 3-part Canadian robotics series takes a look at the Toronto/Montreal nexus and then continues eastward to the Maritimes.

Third of a 3-part series on Canadian robotics
Canadian Robotics: Ingenuity and Practicality
On the road to find out: Toronto/Montreal to the Maritimes