China and KUKA team up for a magical mystery tour into robotics, AI, and a massive high-tech IP database

All aboard the “up” elevator
When the guys from Midea took the up elevator at KUKA’s Augsburg headquarters in 2016, they knew that Chinese robotics was in trouble.

Already the largest buyer of industrial robots in the world, China had committed itself to buying hundreds of thousands more robots in order to automate its entire factory system. A system that was reckoned to be populated with a million-plus factories.

The problem: The largest buyer of industrial robots (30 percent of the world’s total) and the largest universe of factories was totally reliant on foreign robot manufacturers for high-end robots necessary for sophisticated manufacturing. Domestic suppliers had a 16 percent market share, none or very little of which were high-end robots. China was vulnerable. It wanted its own, top-flight robot maker; a domestic powerhouse the equal of the world’s best.

The Midea guys had recently taken the same elevator ride at Yaskawa where their overtures to buy the world’s second largest robot manufacturer had been politely rebuffed.

It was KUKA or bust! Midea had zero chance at even getting on the elevator at robot kingpins like Japan’s FANUC or the Swiss/Swedish ABB.

To acquire KUKA, considered the fourth best in the world at product quality and market share, would assure China of a fighting chance at robotics respectability as it furiously automated its home industries with robots.

China was a late arrival to the industrial robot games. Of the dozens of its domestic robot builders, hardly any have been around for a decade, and their industrial robots show their immaturity. Estun Automation sold its first robot in 2013. Even Siasun Robotics and Automation, China’s robotics champion, is hardly the equal of the global big four robot companies.

Without a solid, indigenous robot presence, China would permanently addict itself to buying most of its robots and robot parts from foreigners.  Such dependence at such a critical time in its nationwide automation movement, when it will need hundreds of thousands of robots to man its factories, was not a comforting thought for a country with a long memory of unkind dealings with unkind foreigners.

Their pitch to the Germans would be polished and credible.

Midea and KUKA were already fast friends: KUKA robots were hard at work in Midea’s factories. Midea already owned 13.5 percent of KUKA anyway. So what would be the big deal with Midea scooping up a measly 86.5 percent more? Especially among friends.

KUKA wouldn’t feel a bit lonely as a Chinese company: In the first half of 2016,China had already acquired 37 other German companies (39 in all of 2015). Among them, automation and robot maker KraussMaffei, plus the Italian robot end-of-arm tooling maker, Gimatic, and also, Paslin, the American robot system and automation supplier. Further evidence of China’s chummy, newfound robot comfort zone, from 2014 onward, according to the UK IP office, China had vaulted from having less than one percent of the world’s robot patent applications to fourth overall, just behind Japan, Germany, and the U.S.

China was moving fast and aggressively. …It had to. 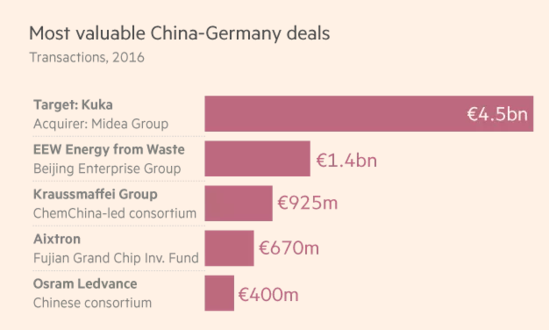 With a million-plus Chinese factories needing robot automation—many of them by the deadline for Made in China 2025, what’s a country to do? China is hell bent on buying its way into contention, and it is pulling out all stops. Money is no object.

A recent (August 2017) Linklaters LLP report said: “Chinese acquirers will spend $1.5 trillion buying companies and investing overseas in the next decade, 70 percent more than the previous 10 years.” Lots of money long term from a determined, committed buyer. In short, a robot-buying juggernaut.

By dint of China’s high-tech buying spree via an army of proxy companies, China has now vacuumed up a vast patent portfolio that will make for a helluva database for cross-pollinating new technology with which to birth new products.

Imagine KUKA engineers sifting through Midea’s recently acquired 5,000 home appliance patents from Toshiba looking for good matches for its robots to power? Better yet, let AI comb all of the patent holdings and suggest which companies and which engineering teams are the best matches.

In fact, AI is another good reason for KUKA to sell itself; China is one of the world’s top three AI powerhouses (U.S. and the UK are the other two). Germany is not.

Reimund Neugebauer, president of the Frauenhofer Society, told Handelsblatt that Germany is not where it should be in AI, that it has catching up to do. “Germany has made progress when it comes to sensors and collecting and saving data,” Mr. Neugebauer said, “but there are other areas where it’s not keeping pace with the global competition.”

That situation will change dramatically when KUKA engineers team with engineers from Huawei Technologies’ AI lab, Noah’s Ark. Huawei’s President and Founder, Ren Zhengfei, puts 10 percent of Huawei’s annual revenues into his R&D staff of, get this, 50,000 people.

A well-funded, joint KUKA/Huawai team might hasten the advent of AI-enabled industrial robots. Sooner than later, all industrial robots will be smart robots, even the hulking behemoths in cages. Dumb robots are soon to be history. Who better to kick off the age of smart industrial robots than KUKA and Huawei?

See related:KUKA & Huawei: China Races to the Factory of the Future

Welcome to China Inc.
When the elevator doors opened, no doubt to the anxious faces of a crew of interested but concerned KUKA execs, an offer was about to unfold that would change KUKA forever.

The only relaxed face in the group was undoubtedly Till Reuter, KUKA’s CEO, the guy who had righted the listing good ship KUKA from a sea of poor sales and debt. Reuter is not an engineer, but an investment banker, who pre-KUKA had helped broker Daimler’s $37 billion merger with Chrysler. Been there, done that; his gut must have told him exactly what was going down. He was probably already counting the ways that a KUKA/Midea marriage would benefit KUKA and vault it to the top or near to the top of the robotics industry.

For openers, here was the largest robot buyer in the world—not just a company, but an entire country, a huge country—looking to move up the value chain by acquiring one of the world’s most storied robot makers.

In 2009, Reuter and good buddy, Bernd Minning, Grenzebach’s CEO, parleyed 5 percent of KUKA shares into 29 percent and two seats on the KUKA board. When Reuter was elected CEO, the fifth KUKA CEO in as many years, the company was “hemorrhaging cash… [and] would record $1.06 billion in revenue, but post an $89.3 million net loss.” For 2016, revenue was $3.3 billion (EBITDA of $239 million).

KUKA jumped into China in 2013 with a factory in the Songjiang district of Shanghai; it’s the company’s second largest plant worldwide producing 5,000 robots annually. In January, it broke ground for its second Songjiang factory.

As Reuter said in a recent interview: “His goal is to be number one in China. KUKA’s revenue there has grown nearly tenfold since 2009, from $58.5 million to almost $585 million.” That’s about 15 percent of China Inc.’s robot buys.

Midea’s all for that and more. “China is becoming the largest robotics market in the world, [and] we want to capture that growth potential,” says Midea’s vice-president, Andy Gu. “There’s demand not just from us, but from all industries.”

Although Reuter is an investment banker, he’s been at KUKA long enough to realize and gain an appreciation for the company’s engineering crew, which is one of the most exceptionally talented in all of global robotics. In many ways, it’s almost as if KUKA doesn’t make robots, but rather, its engineers seek out unique problems to which they can apply automation and robotics to solve. And they don’t care how crazy or seemingly intractable the problem, or how crazy their solution looks. The solutions that KUKA’s engineers concoct usually work…and are reproducible on a manufacturing line.

Evidence the strange machine developed for Boeing by KUKA Aerospace. However, KUKA Aero is not part of the deal:  “The U.S. government required KUKA Systems to divest its KUKA Aerospace unit before it sold the rest of its industrial technology company to a Chinese buyer, home appliance company Midea.”

The breadth and scope of KUKA engineering is versatile to the max; its searching goes anywhere and is totally omnivorous. A look at their recent patent filingstells the story: surgical tools, x-ray, telepresence, mobility, baggage conveyors, manipulators, floor transport systems, articulated arms, arm extensions, flight simulator, and components for space vehicles, on and on.

Those kinds of curious minds are just the right types of sponges to soak up Huawai’s AI, and then to craft a very cool machine from the spongings. With China Inc. investing $13 billion in Silicon Valley startups since 2015, much more of that cutting-edge tech might well inure to China’s robot makers as well, KUKA included.

Add all of that to KUKA’s recent foray into 3D printing, as in the Stratasys KUKA robotic arm, and the opportunity that China presents to KUKA only gets brighter.

Although the German government is filled with angst over losing a national treasure like KUKA, it’s really not; it’s actually gaining access to advanced technologies that would otherwise be unavailable to it. Such access will soon become very important to German tech.

Besides, Reuter also realizes quite clearly that the German government and all that supposed angst was nowhere to be found when KUKA was bleeding millions and its future looked dim? No one offered a helping hand until now, and now is too late.

China and KUKA are carrying each other away on a magical mystery tour of unknown duration with a destination that’s just as elusive. We’ll just have to see when we get there. That’s exciting!

Engineering talent, AI, an outrageously massive IP database, and a bit of curiosity are set to discover a few new worlds…as well as fabulous wealth.