Factory of the Future would grind to a halt without them

Game of parts
It took the planet fifty years to build and deploy its first million industrial robots and only eight years for its second million, so says the International Federation of Robotics.

That’s over 8,000 industrial robots per month for the next forty-eight months. China’s own estimates, according to the IFR, put the monthly inflow at upwards of 13,000 per month. The Nikkei Asian Review is calling it a Chinese robot buying spree. Indeed!

Other than ABB, KUKA, Comau, and Universal, the greatest beneficiary of that spree is going to be Japan. 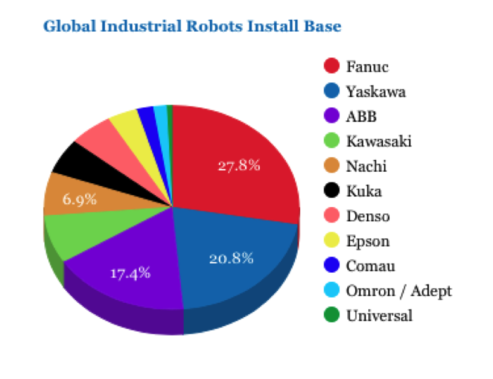 Unprecedented as well, and growing even faster than the big-boy robots, will be the little guys, the cobots, especially in Asia:

The industrial robot market is expected to nearly double from its 2016 $38 billion; while the newly updated (February 2017) Worldwide Semiannual Commercial Robotics Spending Guide from International Data Corporation (IDC) reports that for the first time ever the sales of  software, robotics-related services, and after-market robotics hardware will eclipse the sales of the robots themselves.

IDC’s spending forecast, with robots and software and services and parts all lumped together, will be a heart-stopping $188 billion in 2020. Minus the $80 billion or so for the robots leaves the tidy sum of $100-plus billion in robot extras.

Chief among those robot extras are parts, which are headed for a bonanza of bonanzas serving both the original equipment and replacement part needs for millions of industrial robots.

And the kingpins driving the robot parts biz are members of the same crew that owns the monopoly in industrial robots, Japan.

Stick your arm up under a robot, most any robot, and the actuators, servos, reducers, joints and cabling will all feel like Japan, because they are.

Speed reducers
Getting a sense of the robot parts bonanza is best understood when taking a look at the need for one of its most critical parts. How about the speed reducers necessary to drive a robot’s multi-axis arms? Each joint of an articulated robot is driven by an electric motor via a speed reducer. If you are going to need millions of articulated robots, there’s a need for speed reducers as original equipment and as replacement parts …over the 12 to 15 year lifespan of an industrial robot.

For example, Japan’s Nabtesco, which makes speed reducers for six of every ten industrial robots, (with customers that include ABB, FANUC, and KUKA) is racing to expand with $63 million in new investment. New factories, one in Japan and another in Changzhou, China, will come on line in 2018, bumping up production of speed reducers by 20 percent to an annual 800,000 units.

The reason: Demand for speed reducers is expected to reach 2.72 million units in 2025, roughly double the amount estimated for 2017.

The Emperor’s edge
Nabtesco is far from being an anomaly. If Japan is, as we like to call it here at Asian Robotics Review, the Emperor of All Robots, it’s most definitely the Emperor of All Robot Parts as well. For sure there are many topflight parts producers in the EU and North America that are crucial for industrial robots, but most pale in comparison to Japan’s quality, availability, and prodigious output.

Japan has a massive Achilles heel when it comes to sensor technology, AI, and networking, of which China is well aware. But for sheer excellence in engineering, craftsmanship, and the ability to deliver the goods, the Emperor is without peer.

Good fortune arrived for Japan when the U.S. trashed and then withdrew from the ill-fated Trans-Pacific Partnership (TPP), allowing Japan to awkwardly reorient itself toward China and its One Belt project. Prime Minister Abe sent Toshihiro Nikai, secretary general of the ruling Liberal Democratic Party, to Beijing to meet with China’s President Xi at the One Belt meeting in May.

From buzz kill to bonanza
Of course, Nabtesco planning new factories pre-dates the U.S. pulling out of the TPP; Japan has had a strategy in place since Abe’s call for a Robot Revolution Initiative at the Hotel Okura in May of 2015. Everyone got real serious in May, then real worried the very next month with the Chinese stock market crash, and even more worried in August with Black Monday.

The world began to wave bye-bye to China, and the Robot Revolution Initiative went from giddy to desultory. Mid-summer 2016, the Initiative was chugging along but littered with worried robot and robot parts builders.

But wouldn’t you know it, China refused to go under. It navigated itself out of harm’s way…and still kept buying by the billions of dollars and still kept building One Belt, One Road. Here in July of 2017, China’s GDP has beaten forecasts with 6.9 percent growth. The 1H2017 has witnessed the Blast Off of Asian robotics. With it came the one thing that everyone had been looking for: confidence. China dished out some major confidence. Debt bubble, real estate bubble, no one is overly uptight. It’s game on, and 2017 is the beginning of the four most important years in robotics (2017-2020).

With year one of China’s current five-year plan in the books, robot-driven automation, sitting way at the top of China’s to-do list, is in full swing. 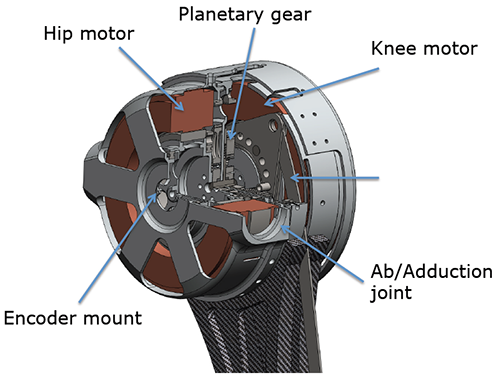 Macquarie Research: The Robot Report is out with an amazing and probably accurate look at China’s next three years of robot buying, which will be mostly non-automotive robot buying:

“The installed base of industrial robots in China to grow steadily at around 33 percent over the next three year period and expects annual demand for industrial robots to increase on average by 31 percent. This would imply an additional 83,000 units of industrial robot demand in China in 2018 compared to 2015. To put this into perspective, 83,000 units is equal to 1.38x FANUC’s current robot manufacturing capacity of 5,000 units per month. We think the majority of the incremental demand will have to be supplied by the local robot manufacturing industry.”

That’s lots of robots and a  mind-boggling need for parts.Japan is not going to waste a second of the next three years! Large investments, factory building, joint ventures, and acquisitions when necessary are popping up everywhere in East Asia as well as Southeast Asia. When the Olympics comes calling in 2020, and the eyes of the world are looking on by the millions, the Emperor of All Robots wants to be perched atop world robotics.

Remember the aforementioned speed reducers?
Nidec, precision motor maker, is building a plant in Hanoi for 15,000 Vietnamese workers, who will build air conditioner parts as well as 100,000 robot speed reducers. Operational in 2018, Nidec is looking to invest $500 million in Vietnam by 2022. Timing is good for the investment noted Nidec Chairman and CEO Shigenobu Nagamori, because the supply of robot parts has not kept up with demand.

Nidec-Shimpo will see $36.2 million from parent Nidec to increase production of robot speed reducers. Previously producing 5,000 units monthly, capacity was raised to 10,000 per month (which is a market share of just 5 percent), with further plans to reach 20,000 units next March and 35,000 as of April 2018.

Non-stop buildout
Nidec-Shimpo, with a sales goal of $135 million by 2022, is introducing a Kiva-style logistics robot with a capacity of 1 ton that is capable of calling an elevator and riding between floors.

Yaskawa and FANUC, intent on building out capacity, will put up new robot factories in China and Japan respectively.

Nachi-Fujikoshi will try to triple its robot output with a new China-based factory.

Staying in play
With all this robot action happening either to China and/or in China, what’s China doing to stay in play? Turns out, plenty, and it’s quite fascinating.