1H2017 was the countdown we've all been waiting to hear. Give Japan and China all the credit for getting things off the ground in a very big way 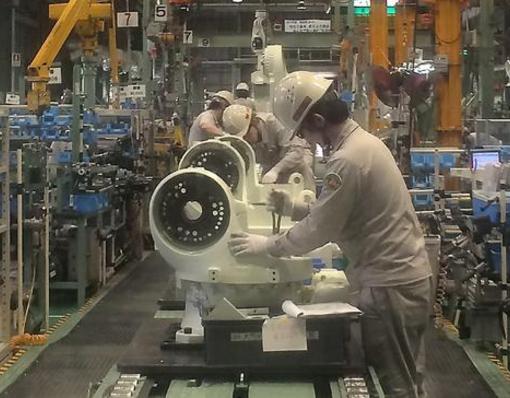 Japan’s busy robot factories
Perched quietly on its launch pad for a couple of years now, the big bang of industrial robotics was more a litany of media news stories squeezing every bit out of robots stealing jobs, rather than keeping an eye squarely on the tech and its effect on manufacturing.

We won’t need the International Federation of Robotics to tell us in February of 2018 about the staggering liftoff in industrial robot orders that transpired in 2017. It’ll all be in our faces daily: the orders, the revenue, the factories working triple shifts to make more robots and more robot parts, as well as photo ops of silver shovels breaking ground for new robot factories and new robot parts factories.

The Boston Consulting Group (BCG) has gone so far as to take another look at its research and to add a cool $20 billion more to its initial forecast. “The global market for robotics—the use of computer-controlled robots to do manual tasks—is growing far faster than expected,” said BCG last month.  “In 2014, BCG projected that the market would reach $67 billion by 2025. In 2017, we increased that estimate to $87 billion.”

Things are changing so fast that BCG may well have to take yet another look come early in 2018.

And where is most of this action taking place?  And who, in large measure, do we have to thank for it?

Well, the first part of that is easy to answer: Asia. It’s the epicenter of the Fourth Industrial Revolution, and extraordinary industrial tech is taking place there like nowhere else on the planet.

Kudos to Japan & China
The second part is also easy: Japan and China. Japan for its unmatched prowess in industrial robot technology, superlative manufacturing of same, and dogged questing to make the best bots at the best price. And China, by design, for the wholesale gutting of the legacy manufacturing system that made it the world’s factory, and for pouring its treasury into risky, pioneering of robot-driven automation.

Funny thing about it, it’s all beginning to work. Give Japan and China all the credit for getting the revolution off the ground in a very big way.

And yes, these two don’t even like each other a lot…a real lot!  They’ll never ever kiss and make up; there’s just too much historical “badness” keeping things apart in the Sea of Japan.

But remember, it’s a revolution, and there’s no turning back. Going forward, succeeding for their respective peoples means rapprochement, and that’s what they are about right now. Just a few short months ago it was doom and gloom in Japan over declining robot sales to China, the globe’s most voracious consumer of robots and robot parts. Things have radically reversed.

It’s good to remember that in Mandarin rapprochement is this 和睦, meaning harmony; in Japanese, it’s this 和解, meaning reconciliation. There’s a big difference lurking there.

The net-net?
We’ve finally got liftoff taking place, and Asian Robotics Review is going to serve it all up to you in a multi-part series from July through August. Hang with us; this is a great story. This liftoff will end up being one of those moments in history when the world as we know it changes dramatically.

It’s definitely one not to miss! And if by some odd chance you do happen to miss any of the multi-part series, not to worry. We’re packaging it all up—including a very special year-end bonus—as a downloadable pdf come the end of September. Yes, the 2H2017 for industrial robotics will be over in September.

Why a quarter of a year early? Well, come September things will be too frenetic to think about 2017 for very long; we’ll all be too busy craning our necks into 2018 to take much notice. Up ahead, AI, smart robots, even smarter cobots, Big Data and analytics, 3D printing at scale, and digital factories, will all be converging, some of which in strange, previously unforeseen ways, and all of it will be hogging headlines and imaginations everywhere.

2018 is going to be a magical year for industrial robotics, why wait for it to arrive in the usual way?

See: 2017-2020 Robotics: The Big Breakout!
The most important four years in the history of robotics have begun.