A Special Something Between Robots and Humans?

Four of the most revolutionary robots of the 21st century all work closely with humans. What's the message?

Revolutions within revolutions
Here at the beginning of the 20th year of the 21st century, with billions of dollars spent in researching and developing robots, four stand out as the most revolutionary of their kind: the surgical robot, the wearable robot, and the cobot (single- and dual arm).

All four work closely with humans, all four have redefined the nature of work, and all four have spawned multi-billion-dollar industries that heretofore never existed.

Next stop for each: a long-lasting relationship with machine learning.

The outcome for each new relationship might well be more revolutionary than the original machine. Maybe we’ll see cobots performing surgeries while surgical robots might assemble computers.

Influencing everything around them
Their looks are stunning to behold, and their movements captivating.  They do things with those movements—intentional things—that have been purposefully engineered into their being.  They are brilliantly concepted, sleekly designed, beautiful machines that were built for a purpose. And it’s immediately apparent from watching them that a bunch of very talented somebodies care very deeply for these machines, and have poured their bodies, minds, and hearts into their creation.

Some set off a revolution, influencing the birth of new businesses, new industries, new technologies, and new relationships with other machines and processes and still other technologies.

Now that these human-built machines are taking on artificial intelligence (AI), how will that new and powerful capability add to their influence? More than likely, AI will make these four even better.

The da Vinci surgical system (Intuitive Surgical)
Imitated but never equaled, Intuitive Surgical robot systems are still going strong (since 2009) after eight years as kingpin of the operating room. At its IPO in 2000—which opened at an incredible $9 per share—the company believed it was entering a new generation of surgery, which it called “intuitive surgery”, saying that it was a “revolutionary advance similar in scope to the previous two generations of surgery —open surgery and minimally invasive surgery, or MIS.

Credit the Defense Advanced Research Projects Administration (DARPA) for financing SRI International’s research into “telesurgery” in the 1980s system as the genesis of the da Vinci surgical system. “SRI demonstrated the prototype to numerous venture capitalists and others in the early 1990s, but no one expressed serious interest until Dr. Frederic Moll in 1994.”

According to Forbes, Moll initially did not think that the SRI System had much commercial value. He told Technology Review in a 2000 article, “What got me excited wasn’t the remote-surgery aspect, but the way the system eliminated the need for a hand to be directly connected to a surgeon’s instruments.”

In 1995, after acquiring a technology license from SRI, followed by other licenses for technology from IBM and MIT, Moll and his partners incorporated Intuitive Surgical Devices, Inc.

$999 a share later (plus a stock split), Intuitive Surgical is still a phenom!

The exoskeleton: Making people “able” again
The exoskeleton, or wearable robot as it’s known to some, has been hailed as one of the greatest achievements of robotics to date. To Silke Pan, a paralyzed former trapeze acrobat trapped in a wheelchair for a decade, the exoskeleton is a new lease on living in a stand-up world. In short, for her the wearable robot is a life-changing miracle.

2008 was the year that Cyberdyne’s Yoshiyuki Sankai, a professor at Tsukuba University, founder of Cyberdyne and creator of the HAL exoskeleton, began renting out the HAL suit for medical purposes to hospitals and rehab centers in Japan.

Like the invention of the photographic camera and the automobile, many claim first invention. Success has many fathers, is how Tacitus put it in 98 A.D. As of 2018, no fewer than a dozen private companies have developed wearable robots. To their credit, none scream for recognition as the first; they are all probably too humbled by their tech quest to let ego get in the way.

The World Health Organization (WHO) reports that there are 65 million peopleon the planet disabled enough to require a wheelchair. Most have no access to a wheelchair let alone to an exoskeleton, most of which carry price tags of between $40k and $70k. A recent Technavio report, Global Exoskeleton Robots Market 2016-2020, forecasts the global exoskeleton market to grow at a CAGR of 50.85 percent; revenue recognized from that growth ($36.5 million in 2015) to $2.1 billion by 2020.

Tristan Vouga, from the Ecole Polytechnique Federale de Lausanne (EPFL) in Lausanne, Switzerland, sees the human/robot relationship as a dance: “The idea is that they’re two people walking—actually, two pairs of legs: the human and the robot, and they have to walk together,” Vouga says. “It’s a collaboration. It’s like a dance: You have to coordinate, to be aware of each other, and there’s this real symbiosis between the two actors.”​ 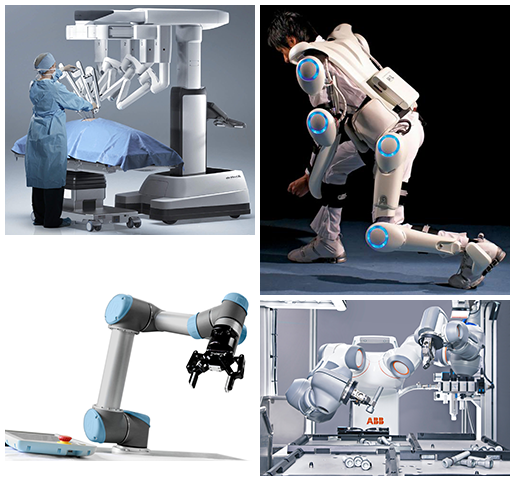 The single-arm cobot (Universal Robots)
Esben Østergaard, Kasper Støy and Kristian Kassow, three Danish grad-school buddies, had no idea in 2005, when they founded Universal Robots (UR), what was about to happen to them because of their very different, robot invention, the UR5.

Like some weird, new algorithm tossed into the complex and fast-moving world of robotics, the UR5 changed everything. A lightweight, aluminum robot with a versatile single arm possessing six degrees of freedom, without a torso or an enclosing cage to keep it safely from humans, the simple-looking and easy-to-operate machine revolutionized manufacturing and logistics almost overnight.

The three Danes rolled out into the global robotics industry something that had been talked about and prototyped for years but never commercialized. That something was the collaborative robot, what’s now simply referred to as a “cobot”, a robot helper that could work in close collaboration with a human worker.

As a well-known automation integrator remarked in amazement: “Three years ago, I would have said you were crazy if you told me that this robot would revolutionize manufacturing. But it most definitely has.” That “has” meant for Universal Robots’ global sales going from $4 million to a cool $170 million (2017), from SMEs just about everywhere trying one out and then buying a bunch more, to a multi-billion dollar U.S. multi-national buying them out for $285 million. Esben and his pals still run the show, have a market base of near 27,000 installed machines worldwide —with no market ceiling even vaguely in sight!

Looking more like a huge juicer from Ikea, the UR (now consisting of three models: UR3, UR5, and the UR10), has spawned lots of look-alike, knock-offs from a half-dozen established to startup competitors. To continue its amazing success story, Universal Robots will need to stay ahead of the pack in both price and performance.

Summing up what everyone was simultaneously thinking about UR was Ilian Bonev, head of the Control and Robotics Laboratory at École de technologie supérieure (University of Quebec): “I now have no doubt that the UR5 is by far the most intuitive industrial robot out there. I can’t believe no one has thought before of developing such a simple robot user interface.”

​The dual-arm cobot, YuMi: FRIDA marries Roberta
Okay, so the world has now got revolutionary single-arm cobots in the form of Universal Robots. What about adding another arm to make a dual-arm cobot?

An extra arm could come in quite handy when handling parts and tools in the assembly of things like complex electronic devices. Look no further than the class of the two-arm assemblers, ABB’s YuMi. YuMi is strikingly gorgeous with smooth voluptuous lines and gracious movements, as well as being a sweet bit of engineering.

It’s also an interesting example of evolution through acquisition. The machine is made up of an in-house, ABB-developed 7-axis robot that was introduced in 2011 called FRIDA (an acronym for Friendly Robot for Industrial Dual-arm Assembly) and then married to Gomtec’s Roberta, a 6-axis line of three robots (different lift and reach for each)…after ABB acquired the company in 2014.

Roberta was designed by Bernd Gombert (owner of Gomtec), who is the well-known mechatronics engineer formerly with the German space agency DLR. Gompert is also the guy who designed KUKA’s single-arm cobot, the LBR iiwa. Gometec showcased Roberta for the first time at Automatica 2014, ABB spotted it, and quickly and wisely thereafter acquired the company.

In YuMi, ABB now has at the ready a one-of-a-kind robot assembler, which may prove to be very timely. The Boston Consulting Group (BCG) predicts that by 2025 the adoption of advanced robots for assembly will be a necessity in order to increase productivity. BCG claims that robot power will boost productivityby “30 percent in many industries and lower total labor costs by 18 percent or more in countries such as South Korea, China, the U.S., Japan, and Germany.”

As sensor technology and artificial intelligence (AI) ramp up in cobots over the next few years, ABB’s YuMi is in place to evolve into enhanced models of itself. The basics of great design and utility are ready and waiting.