Why Is China Going to Chicago?

ProMat/Automate will be an eye-opening introduction to rapid automation, and the cobot revolution downright mind-blowing to take home

China on the hunt in Chicago
In a kind of reverse Marco Polo expedition, thirteen Chinese automation companies are trekking to Chicago to partake in the bounty of automation wares that are annually on display at the combined ProMat/Automateconference and expo.

It’s a first-ever visit for China in attending the April 3 to April 6 extravaganza at the McCormick Center, and it’s very much hoped by the conference organizers that it won’t be China’s last. China has been on a worldwide tear these days buying up billions of dollars of technology, and soon might find that ProMat/Automate is an irresistible place to do more spending. No doubt conference exhibitors are hoping for a four-day shopping-spree to hit their booths.

Called a joint US-China robotics forum, the visitors will participate in talks at the event’s “Future of Automation” theater, located near the entrance to the exhibit hall.

The Sino-U.S. meetup is billed as an entrée to an exchange of ideas on automation and the forging of strategic partnerships with the globe’s number one buyer of robots since 2013.

“In the past four-year period, China has acquired 189,000 robots,” says Joe Gemma, president of the International Federation of Robotics. “That trajectory will continue to 163 percent growth over the next four years to 2019.”

In short, ProMat/Automate has as its guest the best robot-buying customer in the world.

Cobot mania…with good reason!
Such expeditions to foreign lands looking for cool stuff to bring home to China is a tradition thousands of years old. That’s how emissaries from the emperors found Champa rice in Vietnam, South American sweet potatoes in the Philippines, chickens from Thailand, and during the Song dynasty in 1128, a real find in high-nitrate gunpowder. ProMat/Automate has its own big-little surprise waiting for the group: the cobot (short for collaborative robot).

James Stettler, an analyst at Barclays Capital, estimates the cobot market could grow from just over $100 million last year to $3 billion by 2020.

The thirteen Chinese companies will have a ringside seat as the hot-selling cobot struts its stuff for an anticipated 20,000 or so attendees.

The category leader and arguably the originator of the cobot is the Danish company Universal Robots (UR), and was the brainchild of its three co-founders, Esben Østergaard, Kasper Støy and Kristian Kassow, who met as grad students at the University of Southern Denmark in Odense.

The company was formed in 2003, the rest is history. As intended by its developers, the cobot has sparked a revolution in manufacturing. The machine, capable of working safely and effectively in close proximity to human workers, presents a new paradigm in human-robot interaction. The success of the cobot has been nothing short of spectacular.

UR’s cobots garner awards and accolades most everywhere they go; the latest being Fast Company’s 2017 Top Ten Best in robotics.

Today, most robot companies have rushed out a cobot model of their own to meet the demand created by Universal, and most will display their offerings at ProMat/Automate. The thirteen Chinese companies will have ample opportunity to watch, to demo, to compare and to contrast the various cobot models. Which, if any, of the cobot models will win the hearts and minds of Beijing’s high-tech emissaries is up to the machines. Let the best machine win.

KUKA, now owned by China’s Midea, also has a cobot in the versatile LBR iiwa, which may already be a large part of China’s strategically critical  Made in China 2025 program. If so, it’s up to the non-KUKA cobots at the conference to be at their best.

Universal Robots has the lead to lose
The cobot king, Universal Robots, is doing a full Monty by occupying one of the largest expo booths in order to showcase more than twenty new UR products.

In addition to UR’s own commodious expo booth, twenty other Automate exhibitors will also be exhibiting their own tech tied to UR’s cobot arms.

UR robots in their booth applications,” says Østergaard, “is a significant testament to Universal Robots’ versatility and widespread market appeal. I look forward to walking the show floor and seeing our robots everywhere.” His goal is to turn the twenty into one hundred.

The sleekly designed, Scandinavian URs look like something from an Ikea catalog, and are just as easy to set up and use. The company claims that they work right out of the box and are simple to operate. You don’t have to be an engineer. UR’s website is stuffed with testimonials and videos showing off their ease of use.

That should be a real eye opener for the Chinese contingent. With over 250,000 SOEs (state-owned enterprises) in China employing millions of people, automation has to be easily deployed, easily taught and mastered by non-engineers, and foolproof wouldn’t be bad, either.

Beyond the 250,000 SOEs, there are millions of other small- to medium-size businesses (SMEs) where automation is in high demand. Expensive robots with expensive set up and programming needs from expensive engineers are, in nearly all cases, out of the question. 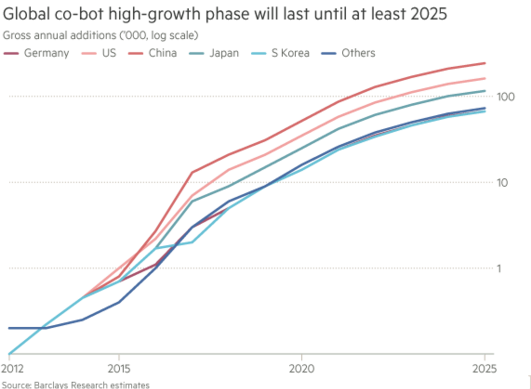 The cobot’s “second” revolution: teaching
Since cobots are so simple to unbox and set up and so user-friendly to operate, they don’t require the need for specialized in-house engineers or technical experts in order to do the job for which they are bought. Anyone can control most any cobot.

That is a totally liberating opportunity for SMEs, who are experts with their own products but have little to no expertise at automation…but would love to automate their production lines in order to lower expenses and to increase productivity.

These same SMEs just so happen to represent a majority of the attendees streaming through the doors at McCormick Place. These automation seekers now have a hero: the cobot.

But they also have a fear, which Bill Gates articulated years ago:

“The first rule of any technology used in a business is that automation applied to an efficient operation will magnify the efficiency.

“The second is that automation applied to an inefficient operation will magnify the inefficiency.”

No SME wants to invest $35k in a cobot only to end up being “inefficient”. That would be a crushing blow.

What they need is easy how-tos, simple-to-understand information, and lots of explanatory videos. And that’s just what’s happening in the robotics industry: Every manufacturer of robots is loading up their websites with info-rich offerings designed to attract, to sell, and to keep customers.

Cobots have spawned yet another revolution, that of educating the public about how to successfully buy and deploy these new automation tools.

As might be expected, Universal Robots’ website has a hugely customer-centric trove of information at the ready. UR proclaims on its homepage that “We share information” to “Automate almost anything”, and oh-boy does it ever.

However, hands down, one of the best information-rich offerings in cyberspace for both newbie and experienced cobot owners alike is provided by a company that doesn’t even make a cobot. Rather, the company makes end-of-arm toolings (EAOTs), commonly called robot grippers.

Robotiq’s homepage goes right to the point of cobot existence: “At Robotiq, we free human hands from repetitive tasks. Industrial automation is now easier and faster than ever. No need for huge budgets, an engineering specialist or wasting months of your time. A robotic automation cell can be setup and ready for production within one day.”

The site backs up its dedication to “freeing hands from repetitive tasks” with a downloadable boatload of information for newbie to pro: An extensive e-book library, how-to videos, a blog that is well-written and actually useful, seminars, and a very cool DoF community “where industrial automation professionals share their know-how and get answers.”

As Bouchard reckons: “Today’s manufacturers can’t find enough skilled manual people to keep their factories running. They turn to robots only to realize that they’ll create a more critical skills problem: having the right people to install and program the robots. By combining flexible, plug & play components with educational content and expert’s community, we help manufacturers solve their challenges.”

Message for China
Both of these cobot revolutions seem to be necessary if this new breed of automation is take hold and thrive with SMEs. It may well be the breakout move that robotics has sought for decades: the Swiss-army-knife of rapid automation that anyone can use to automate anything, especially for the non-engineer end user, together with a teaching and knowledge repository of ready-to-use, easily-mastered operating information.

Speed is of essence with that sort of deadline, and 2020 is only four years off!