On Fear & Loathing of AI/ML

Margaretta explains it all
The antidote to all the fear and loathing over Artificial Intelligence/Machine Learning (AI/ML)—fear mongering that’s heard more often than not these days— hit my inbox from Margaretta Colangelo. It was a breath of fresh air.

The backstory of all the fear and loathing is readily seen in the numbers. As Pew Research Center has encountered: Public opinion towards technology varies significantly across the globe. A recent study revealed that “people in Asia are substantially more positive about AI and automation than their peers in the West.”

The Pew Research Center study went on to say that there are “stark global differences in public attitudes towards robotics and AI.  In comparison to the positive opinion on robotics and AI from Asia, “fewer than half of respondents in the US, Canada, and much of Western Europe shared this positive view.”

With Asia, especially East Asia, under lots of pressure to automate as quickly as possible, their citizens embracing robotics and AI/ML with positivity is not such a stretch. 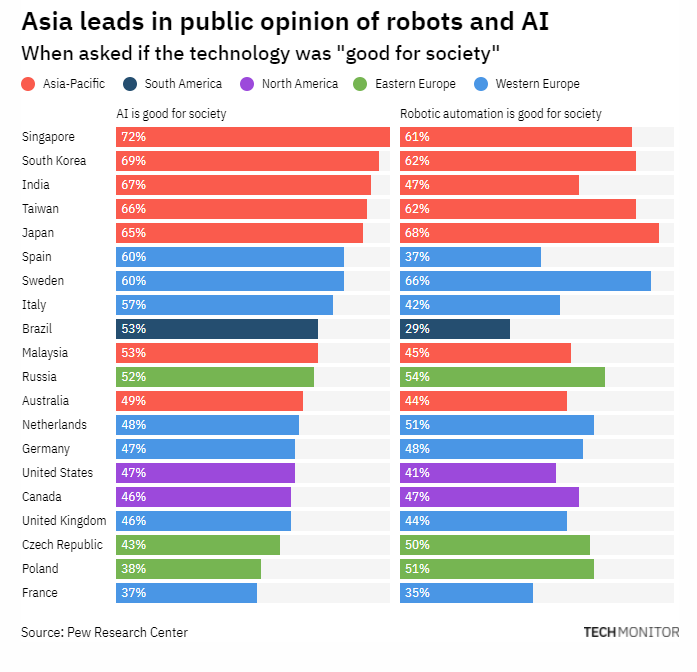 The West, however, with a bit more available time to obsess about its every automation move, gets pelted with the nasty side of AI/ML all too frequently. It’s easy then to understand how negativity can creep in and settle.

It was distinctly refreshing then to read Margaretta Colangelo’s good news AI In Healthcare Highlights & Milestones 2021, with her exhaustive tally of the who, what, and where of robotics, automated processes and AI/ML working alongside lots of brilliant researchers and the eye-popping wads of investment capital at their disposal.  Extra sweet was all the tech and humans doing things together and making discoveries previously thought impossible…or not even thought of in the first place.

As Margareta put it: “We have reached the threshold of a new era in biomedicine where advanced analytical and deep learning methodologies hold the potential to vastly improve the way we understand and treat disease.”

Her report is nothing short of mind-blowing. It alone should make everyone in the West feel brave towards AI/ML.

“Antibiotic resistance is a serious challenge and has led to the need for new alternative molecules less prone to bacterial resistance.” AI/ML discoveries of antimicrobial peptides (AMPs) have aroused great interest as potential next-generation antibiotics.”

Bearing down on superbugs
We’ve all undoubtedly read about AI’s tackling the superbug threat of antibiotic resistance, which, according to the World Health Organization, kills at least 700,000 people yearly– “and by 2050, this number could reach 10 million.”

A report by the World Health Organization published earlier this year, also found that none of the 43 antibiotics currently under development “sufficiently address the problem of drug resistance” in the bacteria considered most dangerous to public health.

That’s bleak, until robotics, automated processes and AI/ML took on some new chores in laboratories. Suddenly, new ways of looking at challenges began to bubble up and then breakthroughs began to follow.

“Antibiotic resistance is a serious challenge and has led to the need for new alternative molecules less prone to bacterial resistance.” AI/ML discoveries of antimicrobial peptides (AMPs) have aroused great interest as potential next-generation antibiotics.”

Then comes Margaretta
“In 2021, companies using AI in healthcare,” writes Margaretta, “made significant progress and reached important milestones. We have reached the threshold of a new era in biomedicine where advanced analytical and deep learning methodologies hold the potential to vastly improve the way we understand and treat disease.

In 2021 the application of AI enabled big advances in many areas of healthcare. We made significant progress in AI for drug discovery, medical imaging, diagnostics, pathology, and clinical trials. Important peer reviewed papers were published and dozens of partnerships were formed. Big Pharma companies and major tech companies became very active in the space. Record amounts of funding were raised, and a few companies even started human clinical trials.

Microsoft and NVIDIA launched two of the world’s most powerful supercomputers and Microsoft announced Azure OpenAI Service. In 2022 we expect these technologies to converge across the healthcare spectrum.

This article highlights exciting milestones achieved in 2021. The summary was developed in collaboration with the Alliance for Artificial Intelligence in Healthcare (AAIH) and is the first in a series of progress reports on the sector that will be supplemented by industry.

BTW: Margaretta does all of this putting together by herself. No roomful of research assistants doing the real work with Margaretta adding her byline atop the piece. This stuff is all her diligence and comprehensiveness in action. Bravo. You go girl!

Get Ready to Blow Your Mind! 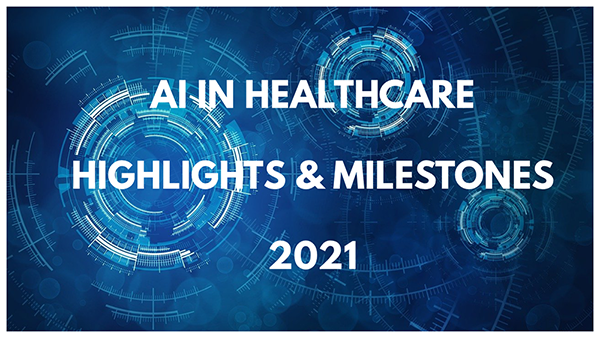