When the Robot Burns the Toast

When the Robot Burns the Toast:
Full podcast episode 5:48

Online tour
Everything is online these days from events to corporate meetings to product demos. Toyota Research Institute offered one: a 36-minute Robotics Virtual Open House, which put on display what Toyota is doing with kitchen robotics for the elderly and handicapped.

Truthfully, I was disappointed.

Now, I was coming at the open house with a gigantic bias: I’m a caregiver for my elderly parents. Well, I was a caregiver until my mother and father passed. But for a long while, I was like the 48 million other caregivers in the U.S. who toil in the aid of a family member. Free services that the U.S. government says equal $480 billion annually.

My heart goes out to all the other caregivers anywhere in the world. It’s a tough, exhausting, unrelenting job.

My caregiver workday—before my paid workday—began at 7AM daily in my parents’ kitchen with my father suffering from Alzheimer’s and my mother from end-stage Parkinson’s.

At the TRI online tour, Toyota’s kitchen was pretty thin on tools to help the elderly and handicapped.

I fully understand that from CEO Gil Pratt down Toyota is staffed by caring and brilliant engineers who sincerely want to create the robotics that will make for better lives for all the needy ones.

But, looking at TRI’s kitchen with a huge, awkward-looking robot moving around in it, I said to myself: “What are they thinking?” 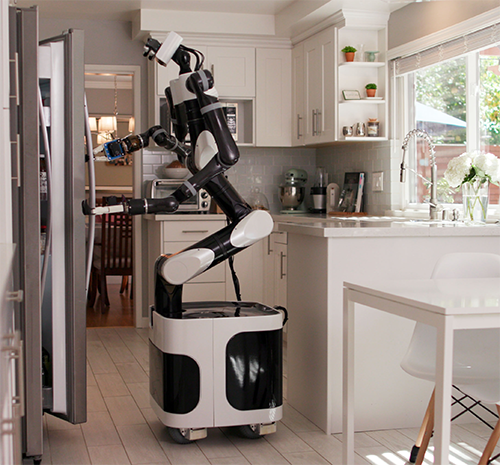 All my elderly parents needed was the coffee maker, microwave, toaster, refrigerator, and please help me to get to the bathroom. That’s it. All else can be handled, with some effort, but it can be handled.

Washing clothes. We don’t need a robot. Forget it. Pile the dirty laundry in a bag, have it picked up, washed, folded and returned. A year-long contract isn’t going to break the bank. Dishwasher isn’t necessary either. Elderly use few dishes daily to make starting the dishwasher worthwhile. Besides, hand washing a few things daily is good exercise for an old person’s hands, fingers, arms and wrists.

Stovetop? Forget it as well. Way too risky. Have family members over on the weekend to prepare a week’s worth of meals for the microwave.

TRI’s website says that they are: “Developing robotics capabilities to amplify and augment human abilities.”

TRI says it interviewed lots of elderly and handicapped people to glean ideas and needs. Again, I didn’t see it realized in any tech gear beyond a gawky-looking giant robot.

Another obvious thing that looks like it might have been overlooked was input from kitchen appliance makers, who are experts in the space. I think a meetup between TRI’s engineers and those from GE Appliances should be in order, if it hasn’t happened already. GE has an awesome new line of refrigerators which might well be capable of automation for the elderly and handicapped.

After screening the video and reflecting on what I had witnessed, it dawned on me that TRI is not alone in what I perceived as missteps in trying to build “robotics capabilities to amplify and augment” the diminished capabilities of the elderly and handicapped.

Look around the Internet, and it’s hard to find any home robots, other than vacuum cleaners, that I’d feel safe leaving with my parents.

Plus, what’s the robot’s reaction when it makes a mistake? Lots of things go awry in a kitchen, like dropping a glass and breaking it or burning the toast. Will the TRI robot just ride over broken glass all day or butter burnt toast?

In 2012, Carnegie Mellon developed HERB (Home Exploring Robot Butler) which was a bi-manual, mobile manipulator comprised of two, awesome Barrett WAM arms on a Segway base equipped with a suite of image and range sensors.” Seems primitive today, but HERB worked well. HERB was talented in the kitchen, it could prepare a dinner in the microwave, for instance.

One thing is for sure, the world is going grey fast, especially in Toyota’s homeland, where half the population will be 65 or over by 2050. Japan is looking at a future shortfall of over 300,000 caregivers. The number of Americans ages 65 and older will more than double to 80 million by 2040.

Obviously, there’s a need, and a massively growing market that’s going exponential in this demographic. 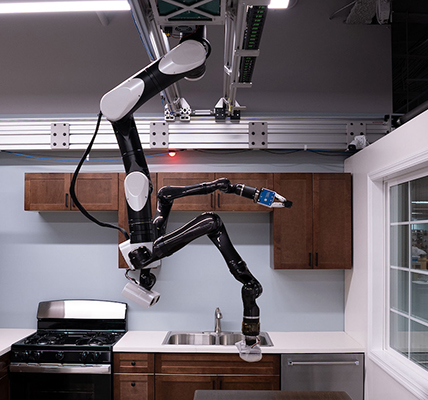 Just maybe, the need is larger than any single company’s ability to develop the tech and to build it on its own.

What’s needed you could call elderly infrastructure to be built, kitchen by kitchen, around the world.

Here’s a suggestion. Just maybe such a massive project as this “elderly infrastructure” needs its own CERN: The massive, world-renowned European Organization for Nuclear Research, known as CERN, in Switzerland?  Get all the TRIs of the world together under one roof and solve the problem collectively: a global organization for elderly robotics R&D.

Something to think about. In the meantime, let’s all stay young. 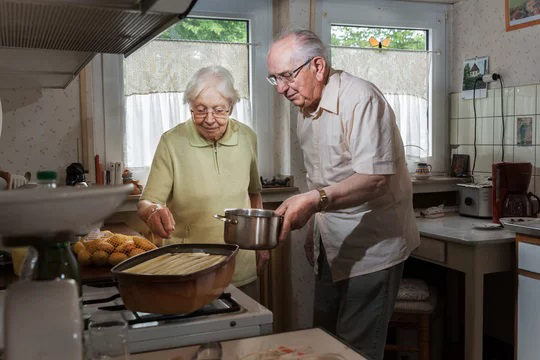