How politics and great power intrigue are already influencing the global robotics industry, and what the consequences might be

“The unprecedented success of China’s manufacturing sector in the last thirty years
has made it of central importance to all players in the robotics space
who hope to expand their market share.” —Rian Whitton, ABI Research 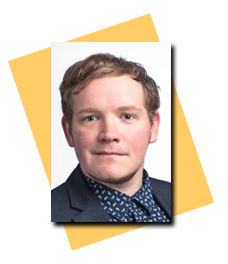 For this week’s Weekend Edition, we swing the chair of perspective and viewpoint around to Rian Whitton, Senior Analyst for the Strategic Technologies research team at ABI Research. Rian has settled in quite nicely, and from his Weekend Edition chair offers up a fascinating look at U.S. scrutiny over China’s robots. The title alone sounds very inviting, and what follows afterwards is  a top-notch piece of writing, research and analysis.

For ABI, Rian analyzes the commercial and industrial Robotics market. Since 2017, he has delivered insight for clients on Industrial Automation, Collaborative Robotics, Mobile Robotics, unmanned aerial systems, and exoskeletons.   whitton@abiresearch.com

A shift in tone
Robotics is a global industry, and any vendor that wants to achieve scale must operate in and work with stakeholders in other jurisdictions. The unprece-dented success of China’s manufacturing sector in the last thirty years has made it of central importance to all players in the robotics space who hope to expand their market share.

As the world’s largest market for robotic-related products, China is both attracting huge investment from foreign automation vendors and is seeing a burgeoning number of domestic champions begin to achieve competitiveness. However, China’s economy is inching ever closely to overtaking the US in GDP terms (nominal), with the earliest projection being by 2028, and tension continues to ratchet up between the two giants on a wide set of issues from IP theft to human rights. This article will analyze how politics and great power intrigue are already influencing the global robotics industry, and what the consequences might be. 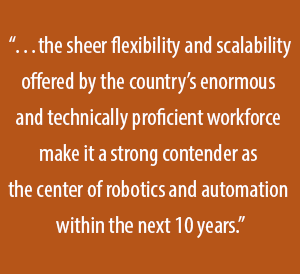 On January 5, 2021, former U.S. President Donald Trump signed an executive order banning transactions with eight Chinese app development companies, namely Alipay, QQ Wallet, WeChat Pay, Tencent QQ, CamScanner, SHAREit, VMate, and WPS Office. As one of the last executive actions of the previous administration, it signaled a continuation of an increasingly combative relationship between American authorities and the Chinese commercial technology space, all justified under the auspices of national security.

While this executive order focused on general purpose transaction applications, the United States has also placed further scrutiny on Chinese robotics vendors operating within the United States. A clear example of this is the restrictions placed on the Chinese company DJI regarding government procurement of civil drones.

There might be a new administration in the beltway, but if anything, the U.S-China relationship is becoming cooler still. Much of the angst policy makers had about Trump’s China policy were based on criticisms of tact as opposed to a fundamental disagreement about a terser U.S. approach to a rising Chinese economy. A paper by the China Strategy Group, Asymmetric Competition: A Strategy for China & Technology solidifies this point.

The group’s chairs, Google luminaries Eric Schmidt and Jared Cohen, are influential voices in both the Democratic Party and Silicon Valley. Their report recommends a much less cordial relationship with China’s technology industry as compared with the last 30 years and echoes the previous administration’s concerns while critiquing implementation.

While the U.S. leadership has changed, Washington, DC, is now united behind a developing consensus that is far more reticent about Chinese corporate involvement in the wider American supply chain, and this is leading to increased scrutiny of Chinese technology vendors.

Automation as key technology
China has long seen automation as a key technology in which to achieve self-sufficiency as highlighted by the Made in China 2025 plan and the Digital Silk Road. To a high degree, Beijing’s aims are being fulfilled. The world’s largest manufacturing economy has a sprawling ecosystem of industrial robot vendors, including Siasun, Estun, and Rokae, among others.

There are also a large number of Chinese automated guided vehicle and autonomous mobile robot vendors that are already competing with American vendors, including Geek+, Flashhold, VisionNav, and ForwardX Robotics. While still reliant on Japanese and Korean factories for advanced harmonic drives, China is now home to a Nabtesco factory that develops precision reduction gears for a Chinese internal robotics ecosystem.

What is more, Chinese domestic gear vendors like LeaderDrive are beocming more prominent. At present, however, a majority of reduction gears are still imported from Japan and South Korea. Close to 40% of the Chinese annual robotics shipments are made from domestic producers, 10% less than the initial 2020 target.

While the aim has not been met, the purpose of such ambitions is not only to meet them, but to generate investment activity among China’s local governments and businesses. The long-term trend still points to China being the world’s largest market for automation for the foreseeable future, and increasingly being a source of innovation.

It is also worth noting that Chinese companies have been acquiring foreign robotics vendors. The most notable example of this was Midea’s acquisition of KUKA AG in 2016. This deal had to be accepted by the then–Obama administration’s Committee on Foreign Investment. It is quite conceivable that, given the change of mood in Washington, such a deal would have been prohibited today.

What is more, while Midea promised independence to KUKA AG up to 2023, there was significant concern among European commentators about losing ownership of a key industry 4.0 champion. For their part, Midea paid US$4.5 billion for a company that today has a market capitalization of US$1.7 billion, and felt they were being unjustly scrutinized due to anti-Chinese sentiment.

Since its acquisition, KUKA AG enjoyed a bumper year of growth in 2017 before declining in revenue for three straight years and changing their chief executive officer. The KUKA acquisition has led to significant backlash within the European robotics industry, and the high-water mark of collaboration has likely been reached among the respective supply chains.

Entangled markets
This hardening of attitudes is potentially a boon to the U.S. robotics landscape. If business leaders and political leaders are truly set on reshoring manufacturing, the U.S. manufacturing space will have to automate to levels currently exhibited by Singapore, South Korea, and Japan. This would mean tens of thousands of new units a year. At the same time, it will be hugely damaging to companies of Chinese origin that have established themselves in America’s automation market and will limit the ability of US researchers and businesses to utilize Chinese engineering talent.

Flexiv is hardly the first Chinese vendor to hit the cobot space. Rokae has received close to US$30 million in funding. Meanwhile, companies like AUBO Robotics have had a mixture of Chinese and American leadership but have since limited their US operations. Recently, vendor Ufactory released their Xarm, a cobot that is significantly less costly than other systems, with arms of varying sizes costing from US$4999 to US$10,263. Based on anonymous industry feedback, there is bemusement at how these systems, which are being positively reviewed, are being sold so cheaply.

Often, larger Chinese vendors will spin off companies based in foreign jurisdictions. As an example, Shenyang Yuanda Aluminum Industry Group has invested in a new startup called Yuanda Robotics, which combines German engineers with Chinese capital. Another recent example of this is Shenzhen-based Han’s Laser Technology Industry Group Co, investing in Neura Robotics, a German-based cobot and AGV developer.

While these are cobot vendors with both Chinese and German components, the trend of Chinese robotics players having semi-independent U.S. offices has also been common across different subsectors of the robotics market. These are coming under increased scrutiny from U.S. authorities as many vendors are being blacklisted or placed under suspicion by American technology regulators. Looking forward, these vendors may have to close or be redeployed in more permitting markets.

A case-in-point is robotics developer CloudMinds, one of China’s most famous automation champions that specialize in machine vision, navigation, and natural language processing for robotics. In the case of CloudMinds, their American branch was renamed as Wright Robotics in response to the U.S. Bureau of Industry and Security’s placing the artificial intelligence developer on an entity list and restricting domestic sales.

CloudMinds boasted a revenue of US$129 million in 2019 and was seeking a US$500 million IPO. on a U.S. listing but has since pulled back after the sanctions. It has lost 75% of its U.S. revenue and 80% of its U.S. workforce, needing a bailout from Shanghai investors to survive. The company was initially built by Bill Huang, who—despite being born in China—spent most of his working career in the United States. This tale highlights the potential dangers Chinese robotics vendors may face if competition between the two economies continue to escalate.

Looking ahead
China is the largest market for robotics, and the United States is the center for robotics-related innovation. The former is not going to change, but the latter might be in doubt. While the Chinese market is characterized by a flood of companies that lack a truly unique value proposition, the sheer flexibility and scalability offered by the country’s enormous and technically proficient workforce makes it a strong contender as the center of robotics and automation within the next 10 years.

Increased scrutiny by American authorities could see many fledgling Chinese robotics companies lose huge segments of their North American business, and these companies will be forced to rely on the domestic market and the rest of Asia and Europe for growth opportunities.

That said, European authorities are likely to be less bellicose than their U.S. counterparts. While many German commentators were unhappy with the sale of KUKA AG to the Chinese conglomerate Midea Group, the climate is far warmer toward China in the European Union than in the United States. This can be seen in the continued presence of Huawei within Europe even as the United States lobbies its allies to choose other network infrastructure providers.

On a macro scale, increased competition not only could create more resilient embedded supply chains and increased demand for automation but also could heavily inconvenience businesses caught in between the competing authorities. Trump may have departed the stage, but pre-2016 normality will not be returning.