Asian logistics as lucrative as online shopping itself!?

Looming, mega-logistics challenge that only robot-driven automation can remedy

Two forecasts and a formula equal one bad nightmare

Forecast #1:
Forrester forecasts e-commerce revenue for China, Japan, Korea, India and Australia are in the process of doubling over a period of five years: $733 billion in 2015 to US$1.4 trillion in 2020.

Forecast #2:
Currently, revenues in these markets already surpass the combined figure for the US and Western Europe. Southeast Asia’s e-commerce market is poised to grow even faster. Frost & Sullivan predict $25 billion by 2020, up from $11 billion in 2015.

Formula:
Prologis, and other companies analyzing the industrial real estate market, find that “e-commerce comprises about 20 percent of new leasing for DCs—that’s up from less than 5 percent just five years ago.

“One reason for this growth is that online retailers need approximately 1.2 million square feet per billion dollars of online sales, on average, which is three times the distribution center space required for traditional brick-and-mortar retailers.”

For Asia, the formula is more than elusive.

“Growth is eroding margins” says McKinsey, “for many e-commerce players as they struggle with the basics of moving so many goods. Alibaba, for example, has slated $16 billion for future logistics investments, both to increase its market reach and to improve the reliability and speed of delivery.

What becomes of the vast majority of warehouses and DCs that are not part of the Alibaba or JD.com empires?

Whole lotta shipin’ goin’ on!
The e-commerce sector in Asia is on an exponential growth spurt and will continue its rapid ascent much faster than the broader Asian economy. With it has come a voracious appetite for warehouse space and logistics technology.

The warehouse and logistics space, reacting to mega-spikes in e-commerce activity, began taking off in 2013. That’s when serious money began flowing its way.

For example, private equity firm Carlyle Group LP scooped up $6 billion of real estate assets in Asia Pacific, including “a $200 million deal in 2013 for logistics company Shanghai Yupei, looking to build 17 modern warehouses across 16 cities in China. The business was listed in Hong Kong as China Logistics Property Holdings Co Ltd in July and raised around $460 million.

That near-half billion spells increasing investor confidence in the burgeoning logistics modernization movement in China that is now projected to begin enveloping Southeast Asia in 2017.

Taming e-commerce churn and profit margins with robots
All of those millions of online merchandise orders in China need to be warehoused somewhere, and that somewhere needs to be able to pick, pack and ship these millions of customer orders in a big hurry.

That booming potential is why Tech In Asia noted: “The e-commerce-focused logistics industry could be as lucrative as online shopping itself.”

Tall prediction. However, Asia’s online shoppers shopped to the tune of a record $1 trillion in 2016. Of that total, China’s much more developed online e-commerce machine scored the lion’s share of $899 billion. If the prediction proves even half correct, Asian logistics is in for a wild ride.

In fact, according to eMarketer: “Asia’s ecommerce appetite, being the fastest growing region in the world, is expected to rocket to $2.7 trillion by 2020.”

A recent McKinsey report shows that much of the margin from this growth is “eroding” because many e-commerce players are struggling with the basics of moving so many goods.

Prologis, a global industrial real estate investment trust, owner of 4,700 logistics and distribution facilities across the Americas, Asia and Europe, was swift in its analysis of woeful logistics operations in both Japan and Korea. And China was no better off!

The answer that is resonating with most, yet spurring only a few into action, is technology. Technology that is mightily expensive and difficult to deploy. CBRE Group, the world’s largest commercial real estate services and investment firm, sees logistics modernization, in the form of robotics and robot-driven automation, as the necessary and ultimate solution for a much needed transformation of warehouse operations across Asia: Automated Technology: Driving Change in Real Estate.

For Matt Haddon, CBRE’s managing director of logistics in Asia Pacific, it could all lead to an entire new development cycle. “The use of robot picking systems will lead to different requirements for daylight and height, stimulating high-bay warehousing, multi-layered developments and greater use of mezzanines.”

That all sounds expensive…and is!
With Chainalytics claiming that 20 percent of supply chain costs are tied up in labor, expensive, advanced robots and complex automation systems will ultimately prove to be quite the bargain.

E-commerce giant Alibaba, for one, has slated $16 billion for future logistics investments, both to increase its market reach and to improve the reliability and speed of delivery. Alibaba sales hit $17.73 billion during Singles Day 2016. During the 24-hour event, Alibaba’s logistics arm Cainiao Network struggled mightily to get the 650 million orders—packed and shipped by 1.7 million personnel!—out the door and to the doors of customers. 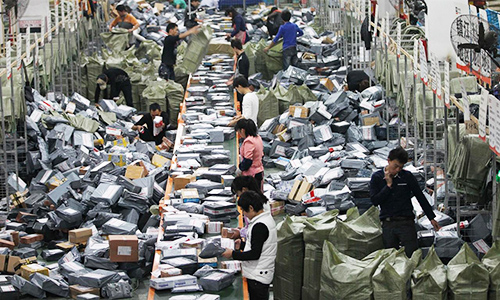 Billions in logistics investments are necessary to transform that stark reality.

Alibaba will definitely need the help of transformative technology as it buys its way into the fast-growing Southeast Asian e-commerce scene with its $1 billion purchase of Lazada; a move that opens six Southeast Asian markets to Alibaba.

Alibaba is not alone in its quest for e-commerce dominance in Southeast Asia. Logistics monster DHL is eyeing the delivery side of the equation and has set up shop in Thailand and Singapore.  Charles Brewer, CEO of DHL eCommerce, admits to his ever-increasing focus on Southeast Asia.

“The upside of e-commerce in Southeast Asia is enormous,” says Brewer. “The demand is beyond our expectations; way ahead of our plans.”

“DHL estimates that the Thai market sees about 150,000 parcel deliveries a day, while Malaysia and Vietnam have about 105,000 a day each,” noted Tech in Asia.

In Thailand, with a population of 67 million, DHL sees 150,000 parcel deliveries a day as a fraction of the potential.

DHL knows that as e-commerce spikes upward in Southeast Asia, so too will deliveries of those customer purchases spike upward as well; and DHL wants a large piece of the spike!

Thailand is racing to get ahead of that looming spike in e-commerce. In a telephone interview, Ajarin Pattanapanchai, senior executive for the country’s Board of Investment, said her government had allotted over $200 million to build out new logistics infrastructure.

Part of that effort is going towards an ultra-modern training warehouse, a tech-advanced facility where Thailand’s logistics and DC managers can simulate and train on how their operations will transform using advanced technology.

Private Thai investment is also lining up with serious money. A well-known Southeast Asian investment bank (requesting anonymity) said that it was actively seeking out investments in logistics for a very sizeable group of its clients who have $100- to $300-million to invest.

Such an investment scenario is replicated throughout Southeast Asia, especially Singapore, Thailand, Vietnam, Malaysia, and Indonesia.

McKinsey has boldly forecast Indonesia to go from 16th to 6th largest economy in the world by 2030.

The Wild, Wild Southeast!
Jones, Lang, LaSalle, the commercial real estate financial and professional services firm, has pegged Southeast Asia for electric growth over the next decade, predicting increased growth in trade, with volumes expected to increase by 130 percent in 2023 to $5.6 billion,” which will have “a significant impact on the logistics industry throughout the ASEAN community.”

Prominent among those reasons for logistics growth, Jones, Lang, LaSalle cites the following as key drivers”

Pack up your bots and head to the “new landscape”

Where in Asia should you head for? Anywhere in Asia! There’s a lucrative opportunity for great tech, if the tech is ready to be put to the task right away. If not, stay home.

Colliers International is calling it a new landscape where: “Focus will be shifted from the traditional logistics center locations such as major transportation nodes to the city centers.