What’s up with Europe?

Why Is the EU the World’s AI Laggard?

With barely 5k AI patents, the EU is getting squeezed into AI irrelevancy 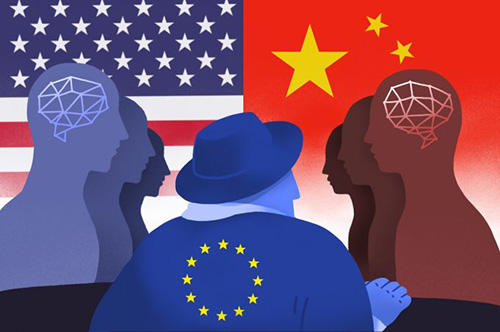 What’s up with Europe
When it comes to artificial intelligence (or, more properly, machine learning: AI/ML), the EU is struggling to become relevant. Emphasis on become. The EU is getting squeezed into irrelevancy from the east and west. The UK and Germany are keeping up somewhat, but that’s it. Why?

“AI is going to change the world more than anything in the history of mankind. More than electricity,” so says Kai-Fu Lee, AI guru and author of AI Superpowers China, Silicon Valley and the New World Order. Notice the absence of Europe in his book’s title. With that kind of forecast, it’s kind of scary to think that the EU is such a laggard.

The London School of Economics is out with Artificial Intelligence in Europe: Do Not Miss the Boat Again, with a pointed subtitle at the root cause: “Lagging behind China and the US, the EU needs to work on talent retention and early-stage funding.”

The importance of AI/ML to robotics, automation, and Industry 4.0 is beyond critical. When it comes to computer vision (or robot vision), imitation learning, self-supervised learning, and multi-agent learning—the hallmarks of advanced technology for manufacturing and logistics—the EU is lagging badly.

See related:
Demise of Dumb
Why Make Industrial Robots Smart?
A new generation of robots is on the rise, and their calling card reads, smart!

And when AI/ML’s importance to most everything else in the world is added to the equation, it’s easy to see that every one of the globe’s leading industrialized countries needs to be AI/ML proficient, or else.

In a continent with over 700 million people, $15 trillion in GDP, and an intellectual tradition in science and technology that is beyond stunning, Europe has fewer than 5,000 patents in artificial intelligence. By comparison, China has over 110,000 and the United States 60,000. And it’s because of the work behind those troves of patents that China and the U.S. lead the world in AI/ML.

Cumulatively, all those Chinese and U.S. patents cost billions of dollars in investment capital, which, it appears the EU has but spends elsewhere.

To the points in the LSE article of “talent retention and early-stage funding,” it would seem that keeping talent in the EU would be a no-brainer if the EU opened its sizeable wallet to early-stage funding, which it doesn’t. And that’s from the EU government side of things. When it comes to venture capital (VC) investing, Europe has been a laggard for over a decade.

According to the very vocal Fabian Westerheide, founder and managing partner of Asgard Capital (Berlin) and international expert on artificial intelligence strategy, entrepreneur and venture capitalist, the EU has countered China and U.S. AI/ML activity with meetings, surveys, and paper.

Strategic Research, Innovation and Deployment Agenda for an AI PPP: A focal point for collaboration on Artificial Intelligence, Data and Robotics

Here’s a YouTube piece by Westerheide setting the background for the EU’s laggard ways.

What’s next in AI/ML?
So what’s on tap for AL/ML for 2021 of which the EU and VCs should take particular note…and pour in truckloads of euros?

Maria Yao at Topbots is out with her Leading AI & Machine Learning Research Trends 2021. See her article for key research papers and trending topics. Here are her top three:

“First, the EU needs to mainstream AI in society and the economy. Companies have to find their place, and there is a big role for the public to support AI and its introduction in real scenarios. This is the part missing in the EU, compared to US and China. 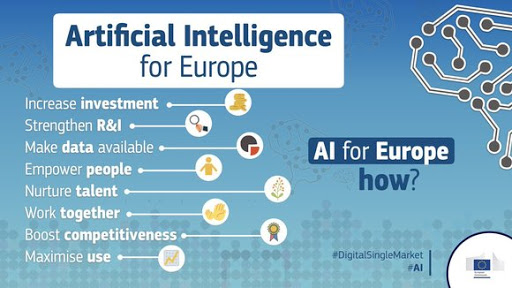 “There is a need for more big public procurement. Second, there is a need to push for research and development in AI through European funding programs, and third, policy is needed to accompany the development of AI in society.

What about leapfrogging China and the U.S.?
The EU could stick an Olympic vault if it bested the field in the area of “explainable” artificial intelligence.

Forest Agostinelli, explains it all in his How Explainable Artificial Intelligence Can Help Humans Innovate (Singularity Hub).

“The field of artificial intelligence has created computers that can drive cars, synthesize chemical compounds, fold proteins, and detect high-energy particles at a superhuman level.

“However, these AI algorithms cannot explain the thought processes behind their decisions. A computer that masters protein folding and also tells researchers more about the rules of biology is much more useful than a computer that folds proteins without explanation.

“AI simply spits out solutions without giving reasons for its solutions.

“Unfortunately, the minds of superhuman AIs are currently out of reach to us humans. AIs make terrible teachers and are what we in the computer science world call “black boxes.” 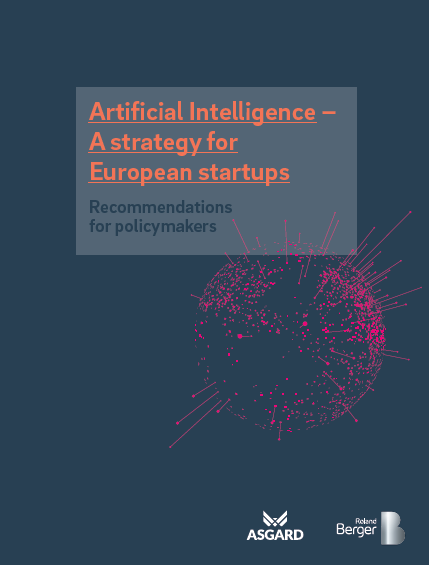