A new generation of robots is on the rise, and their calling card reads, smart!

The demise of dumb
No one wants to buy a lemon; and no factory sets out to manufacture lemons. They happen, and everyone is the less for it.  Whether it’s a Boeing 737 Max 8 or a toothbrush sans bristles, when a product is either or both dangerous or useless because of production errors, it destroys customer confidence, corporate reputations, and profits.

The manufacturing miscues that produce the offending products happen way too often than are necessary. More often than not such product fails are caused by human error or a dumb robot. All too frequently an entire production line can crash, curtailing any and all manufacturing. Again, human error or a dumb robot is the most likely culprit. “It’s perhaps not surprising that the manufacturing sector has higher levels of human error given the breadth of machinery and equipment that requires maintenance and intervention by service engineers and technicians,” said Mark Homer, VP of global customer transformation for ServiceMax, a software provider for improving the productivity of complex equipment and operations.

Turns out that 82 percent of companies have experienced a production snafu at least twice over the past three years. And when it comes to production line outages for these companies the results are devastating and last on average four hours. Back in 2014, Aberdeen estimated the cost of unplanned downtime across all businesses to be $164,000 an hour; a figure that has skyrocketed by 60 percent to $260,000 an hour, according to a report from Vanson Bourne. And the larger the company, like an auto plant, the more expensive things can get in a hurry.

And if it’s a significant enough defect to cause harm to a consumer, then all bets are off. The U.S. Consumer Product Safety Commission reports that defective products annually cost over a trillion dollars.

Dumb humans in the manufacturing loop causing defects are easy to fix; they get jettisoned.

Dumb robots, on the other hand, are very expensive, such that companies will spend even more for a downtime guardian to watch over their robot workers rather than getting rid of them. Dumb robots need to be closely supervised by human QC teams to ensure that what’s going in and out of a CNC machine, for example, is eyeballed for quality. And downtime guardians need to be on the job 24/7 so as to alert a human when a dumb robot is about to mechanically fail. Since most every robot is dumb, junking them for another dumb robot isn’t a viable solution.

When it comes to product defects, a Harvard Business Review piece summed it up nicely: “Somebody makes defects and gets paid for making them. If a substantial proportion of the work force corrects defects, then the company is paying to correct defects as well as to make them. If a factory is producing 15 percent defective products, then 15 percent of the total cost is spent making bad units. Obviously, low quality means high cost.”

However, if a dumb robot can somehow be made to be “smart”, then that flips the equation: manufacturing gains an upper hand by increasing productivity, reducing errors and improving quality. Smart robots make possible the smart factory, and the smart factory makes possible manufacturing gains heretofore unattainable, as this Capgemini chart shows: 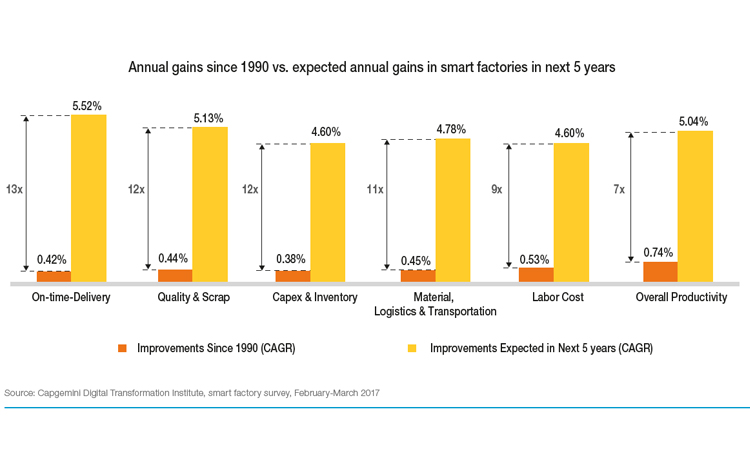 And that’s exactly the game afoot in the robot biz. Robots are getting outfitted with tech gear that’s beginning to awaken them from their cognitive slumber. They are being made to be aware of their workplace surroundings and the work that they are performing.

The “smart” robot
A new type of robot, the “smart” robot, is quickening into reality. Robots (especially cobots) and mobile machines are getting interconnected with multiple sensors and onboard compute power, all imbued with artificial intelligence /machine learning (AI/ML), data analytics and cloud computing.

All of this newfound, real-time data, AI and device interconnectivity, constantly and continuously communicate, so that the data stream can be gathered together, sifted and analyzed. It’s the key to zero defects and zero downtime (zero lemons and zero lemon making).

Information such as cycle times and output rates and maintenance issues uploaded to monitoring systems will optimize machines and allow for preventative maintenance long before a glitch can topple an entire production line.

“Demand for robots to have those features is becoming a requirement, not an option,” says Chris Blanchette, executive director for global accounts at FANUC America Corp. “A lot of companies realize that gathering real-time, process-related data can help improve manufacturing efficiencies and product quality. They can learn how their process is currently working and where they can make improvements.”

Blanchette projects a five-year window for “smart” robot connectivity to take hold across all industries. “It’s hard to gain any value if machines are not somehow connected and gathering data, which is typically collected from various sensors embedded in controllers, robot arms and grippers (end-of-arm tooling).” 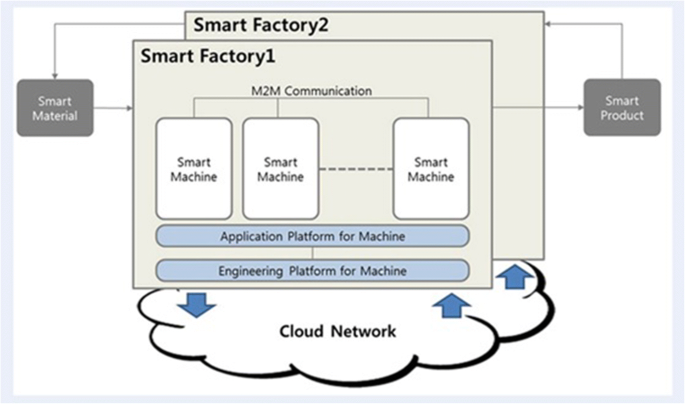 Easy to see what a step up the “smart” robot is over the dumb robot for keeping the production line from crashing while improving process and maintaining quality.
See related: Rise of the Smart Gripper

Hand-Eye Coordination
With all of these sensor-compute-AI goodies packed into an industrial robot, there is still a job to be done; it’s the reason why the robot is standing in front of a CNC machine, or any machine, instead of a human. And that reason is all about getting a job done using hand-eye coordination, something that humans have been doing and have become skilled at over a very long time.

Smart robots need to be good at hand-eye coordination. Grabbing things, manipulating them and placing them somewhere over and over again is principally what goes on in a factory. It’s got to be on the resume of every robot hired into a smart factory. Programming every motor in a robot won’t pass the job interview; robots need quicker access to the skill.

A small German startup, micropsi industries, has developed the software needed to carry out the complex cognitive ability of hand-eye coordination, uniting the abilities of a human’s visual and motor skills to allow a robot arm to be guided by the visual stimulation that’s its camera receives.

Seeing it happen is better than describing it, so here’s a video that demonstrates the requisite skill.

Preparing for smart factories
The Capgemini report, Smart Factories and the Modern Manufacturer, offers up heady numbers on the future of smart: “Smart factories could add $500 billion to $1.5 trillion in value added to the global economy in five years.”

“Manufacturing under Industry 4.0,” the report adds, “has access to digital technologies such as the Internet-of-Things, Big Data Analytics, Artificial Intelligence, Advanced Robotics, 3D printing, and Cloud Computing that have opened the door to incredible gains for early adopters.”

The going for these early adopters has been rough. “Though 76 percent of manufacturers either have a smart factory initiative that is ongoing or are working on formulating it, only 14 percent of companies are satisfied with their level of success. Only 6 percent of manufacturers are ‘Digital Masters’: an advanced stage in digitizing production processes with a strong foundation of vision, governance and employee skills.”

Only 6 percent is not a good stat, but it’s better than being a follower, who are forecast to suffer massively because they dawdled.

The reason behind such a mass extinction of followers will be that “smart factories turbo-charge manufacturing…to drive performance improvements that significantly exceed previous efforts.” In short, also-rans will never catch up to the pack.

“The current and expected benefits of these developments are significant. Manufacturers expect on-time-delivery of the finished products to accelerate by 13 times, while quality indicators to improve at more than 12 times the rate of improvement since 1990.

“They predict the cost items such as Capex & Inventory to be rationalized at 12 times and material, logistics & transportation cost to be rationalized at 11 times the rate of improvement since 1990. At the same time, overall productivity and labor cost improvements are reported to accelerate at 7 times and 9 times the rate of growth since 1990, respectively.” (See chart above)

Seeing “smart” in miniature
Siemens, together with some twenty other industrial companies, installed a small, pilot “smart” factory at TU Wien/Vienna University of Technology [every university should have one!]. Miniature is a good way to visualize the interplay of elements as “smart” robots interact with other smart automation gear and processes.

It makes the “why” of “smart” robots instantly understandable…and unavoidably necessary (in German with English
subtitles).