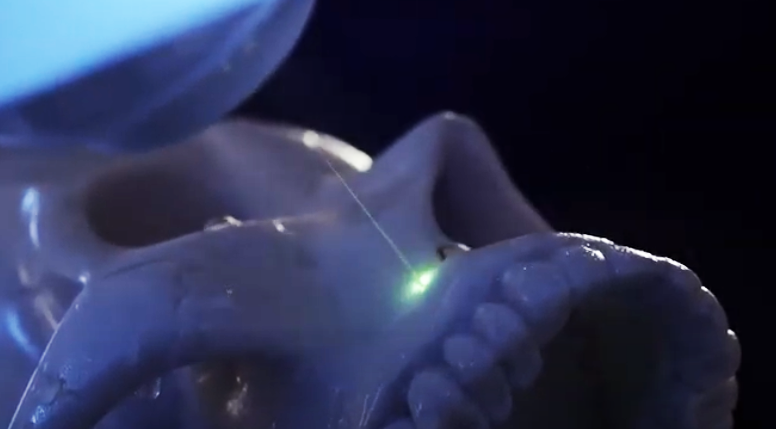 Cobot in the OR
These days, there are a lot of old bones carrying around a lot of aging people, especially in the world’s most developed countries. Every 15 seconds, a senior is admitted to an emergency room because of a fall, every 29 minutes, one dies from a fall.

Although aging is not the only contributing factor for marked increases in orthopedic surgery, it’s one of the highest and fastest growing. The global elderly population is on the rise and will represent 22 percent of the planet’s citizens by 2050. By 2022, Research & Markets forecasts orthopedic surgery procedures performed worldwide will total 28.3 million. That heralds a lot of new hips and knees coming our way over the next three decades.

In the U.S. alone, $25 billion in planned orthopedic surgeries accounted for 47 percent of total orthopedic spending, reflecting a 44 percent increase since 2010.

Surgical robots participating in orthopedic procedures have also increased dramatically in the last 15 years or so, and are steadily contributing to better procedures and outcomes for patients. One thing that hasn’t changed much since the advent of robots working on bones is the surgical tool kit used by orthopedic surgeons. Saws, drills, chisels, and files, the basics used for millennia, are still in use by both human and robot surgeons alike.

However, a small, Swiss-based developer set out to change the traditional surgical tool preference from a steel saw to a cold-light laser. AOT (Advanced Osteotomy Tools), a medical technology developer based in Basel, was spun out from the Department of Biomedical Engineering at the University of Basel. The challenge: develop a robotic arm with a laser scalpel for use in high-precision bone surgery.

From MIRACLE to CARLO
Beginning in 2014, under the name the MIRACLE project (an acronym for (Minimally Invasive Robot-Assisted Computer-guided Laser OsteotomE), the quest for a precision laser began for a group of specialists from medical robotics, laser technology, planning, navigation and intelligent implants. Eventually, they succeeded in producing CARLO, another acronym, this one meaning Cold Ablation Robot-guided Laser Osteotome (an osteotome is a beveled chisel used to cut bone).

Dr. Alfredo Bruno, one of AOT’s four co-founders and chief scientific officer (CSO), said of the group’s initial mission: “Our goal was to achieve radical improvement in the results of bone surgery by replacing mechanical cutting instruments with non-contact “cold” laser, photoablation and medical robots.

Five years later, in July of 2019, CARLO was used successfully on its first patient at Basel’s University Hospital. Perched atop the arm of a KUKA LBR medical robot, the CARLO laser system is self-contained, rolls easily into a surgical suite and is ready to go. 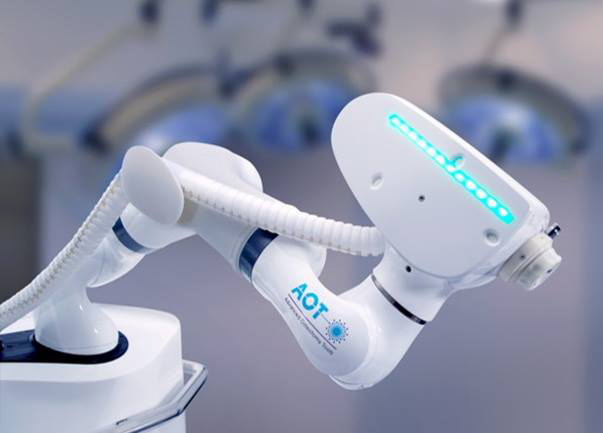 In actuality, the KUKA LBR is a collaborative robot or cobot rigged for medical usage (LBR stands for the German word “Leichtbauroboter” or “lightweight” robot). For a cobot, standing shoulder to shoulder with surgical staff treating a human, must be the ultimate job in collaborative robotics. KUKA’s LBR seems to be blazing a new trail for other cobots to follow.

Asian Robotics in the OR
Asian Surgical Robotics Market Doubles by 2025
Aging populations, increased acute and chronic disease to drive market
from $4 billion to $8 billion

2019 was also a year spent on miniaturization and integration. “Our goal,” says another of AOT’s co-founders, Dr. Phillipe Cattin, “was to make the laser endoscope components as small as possible, so they can fit into the tip of the robot-guided endoscope,” When operating with the endoscope, surgeons can move the laser ‘scalpel’ with high precision through the human body.”

Since then, a clinical study with several dozen additional surgeries has been completed. AOT’s first-in-man study, a preliminary qualification before applying for a CE mark, which will enable AOT to market and sell its CARLO in Europe, has been applied for.  AOT says approval is forthcoming. In 2021, AOT will also present CARLO for US Food and Drug Administration (FDA) approval.

Cold-laser advantage
All surgery, regardless of the specific procedure, is headed toward minimally invasive as opposed to traditional open cavity operations. A minimally invasive surgery utilizes surgical techniques that limit the size and number of cuts or incisions during an operation with the help of small tools, cameras and lights.

As such, laser surgery fits perfectly into this trend. Cold-laser, minimally-invasive procedures offer less discomfort to the patient, less risk from bleeding and infection, faster healing and recovery; and many times can be performed in an outpatient setting, with the patient returning home post the operation.

According to Research and Markets the global minimally-invasive surgery market is headed toward $58 billion by 2024 ($36.5 billion in 2018).

By contrast, a surgical saw cuts its way through bone, destroying the microstructure of bone where the cut is taking place (see photo above). Blood, necessary for healing, is hampered in its passage through the blocked microstructure. Additionally, the saw brings unwanted heat friction and vibration to the cut site, while the cutting action itself produces bone debris (micro bone dust).

A standard laser would also bring heat to the cut site, so much so it would carbonize the bone making healing impossible.

AOT’s cold-laser technique uses laser light together with a cooling, micro-spray of water to cool the area being cut by the laser light.

The cold-laser advantage offers a micro-fine cut through bone without carbonizing the bone or destroying the bone’s microstructure.

“The advantages of laser osteotomy over conventional surgical tools such as saws, drills or mills include arbitrary cutting geometry and patient safety: CARLO can be stopped immediately with the speed of light and can be removed effortlessly, as no mechanical components, which can vibrate or even deform under load, are utilized.”

According to Bruno, who calls himself the father of CARLO, the cold laser can cut geometries that rigid bone tools are unable to perform. These unique geometries can bring greater stability to any cut site, e.g. a dovetail pattern (see photo below). Rigid saw cutting might necessitate the use of screws or clamps to hold bones together during healing.

A bit of intelligence is also in the works for CARLO. The Biomedical Laser and Optics Group of Professor Azhar Zam is developing an “intelligent” laser able to detect tissue in the body…and identify tumors.

Tested, trialed, and nearing EU approval, CARLO is marketplace ready. With one percent of EU hospitals already owners of a KUKA LBR medical robot, CARLO, as a made-for add on, has a good chance of getting popular very quickly.