Asian Robotics in the OR

Robots in the OR from Korea, Japan, and China enable wider distribution of access to surgical interventions for world populations with the greatest need. It’s a win-win for both developers and patients alike as surgical robots provide better quality of life at a lower cost.

A quick glance at the Lancet’s world map of populations without access to surgery tells the grim story of five billion people, especially those in low-income and middle-income countries (LMICs), who do not have access to safe, affordable surgical and anesthesia care. Asia, especially South Asia and Southeast Asia, represent some of the neediest places in the world. Only Korea, Japan, Australia, and New Zealand seem to partially escape the surgical disadvantage in Asia, but only for now. The aging populations of Korea and Japan will create increased burden over the next decade. 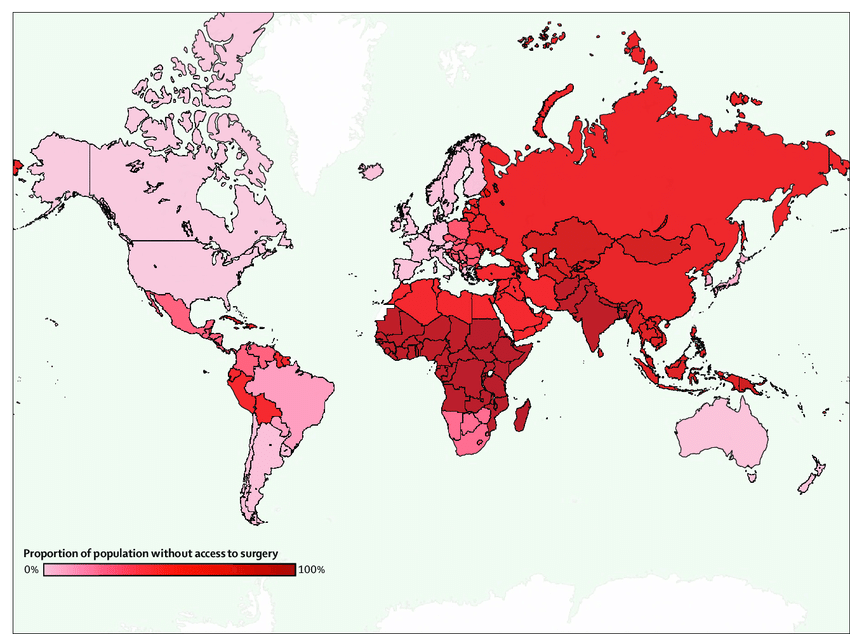 According to a Lancet study: “Without urgent and accelerated investment in surgical scale-up, LMICs will continue to have losses in economic productivity, estimated cumulatively at $12 trillion (purchasing power parity) between 2015 and 2030.

“The rising incidence of chronic diseases,” adds BIS Research, “increasing geriatric population, growing demand for minimally invasive surgeries and miniature robotics, technological advancements in the field of medical surgeries, and substantial funding provided by various governmental organizations to conduct research & development (R&D) activities in next generation surgical robotic systems are the factors that are expected to fuel the demand for the surgical robotic systems in the near future.”

Asia-Pacific surgical robots’ market forecast to top $8.49 billion by 2025 (valued at $4.6 billion in 2018).
The market is growing at a CAGR of 8 percent in the forecast period 2018 to 2025.
Key drivers: “The rising aging population, rising cases of acute and chronic diseases and better benefits to patients
and surgeons are the key driving factors in the Asia-Pacific surgical robots’ market.”

The leadership crown in robotic surgery for over a decade has rested with Intuitive Surgical’s da Vinci system (on average cost per system: $1.5 to $2 million). In 2018, the da Vinci Surgical System segment was estimated at a 59.5 percent share,  and will cross $162.4 million by 2025, rising at the highest CAGR of 9.5 percent. 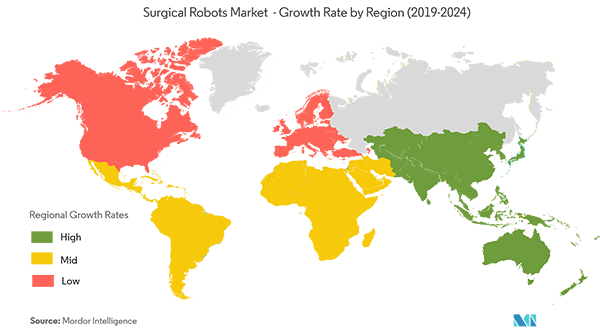 Today, nearly 15 institutions in Korea and more than 70 institutions worldwide utilize ROBODOC system for Total Knee Arthroplasty. The system has been known to perform more than 50,000 joint replacement surgeries so far. Furthermore, the company is also on the verge of commercializing a new surgical robot, capable of performing artificial hip joint replacements as well as joint knee surgeries.

While the Curexo/Think pairing is focused on developing robots for Arthroplasty, Meere Company has developed and launched (March 2018) a laparoscopy surgery robot called Revo-I, the world’s second robot indicated to perform laparoscopic surgeries (da Vinci was the first). The system was approved by Korea’s Ministry of Food and Drug Safety in August 2017. Many universities in Korea such as Chonnam National University and Yonsei University are also developing high end surgical robots. For example: Yonsei University has recently signed a memorandum of understanding (MoU) to jointly develop a next generation surgical robot, while Chonnam National University is currently developing nano robots called bacteriobots, which are capable of delivering microscopic drug capsules to treat cancer.

Intuitive Surgical, in 2017, opened a training and education center for surgeons in Seoul. The first da Vinci system was introduced in 2005 in Korea and since then, a total of 69 da Vinci systems have been deployed across 51 Korean hospitals

In 2009, the da Vinci S surgical system (the first FDA approved surgical robot) was approved by the Japanese Ministry of Health, Labor and Welfare (MHLW). Robotic surgery expanded across various surgical specialties, especially general, thoracic, gynecological, and urological. In 2012, the government approved robotic-assisted laparoscopic radical prostatectomy (RALP) as one of the insured medical treatments and within a year the number of RALP procedures performed rose to more than 3000. In 2014, there were more than 180 institutions which had installed the da Vinci surgical system.

In 2016, the Japanese government began collaborating with five universities and more than a dozen private corporates to develop a surgical robotic system that would enable surgeons the ability to simultaneously monitoring MRI readings and data from other surgical devices while performing robotic surgical procedures.

One result was in 2015 with the development of an air powered endoscopic robot, EMARO, enabling hands-free control with enhanced visualizations via three movable cameras. Developed by startup Riverfield Surgical Robot Laboratory, and “based on technology developed at the Tokyo Institute of Technology…Riverfield plans to have its device on the Japanese market by 2020, selling at half the price of the da Vinci robot.”

China
U.S. healthcare giant, Johnson & Johnson, has an eye toward China’s fledgling surgical robotics. An alliance with the Chinese group Tinavi, under which the two companies will co-promote Tinavi’s robotic arm for spine and trauma procedures in China, is underway.

“The system developed by Beijing Tinavi Medical Technologies is called the TiRobot. It incorporates 3D imaging and optical navigation, meaning it can use a 3D scan of the patient’s torso to plan the exact location of the surgery, drill holes and insert screws. It was in a phase III trial in spinal fusion procedures in 2016 and the third-generation form of the machine was approved in China the same year.

“J&J will now work with Tinavi to co-market and distribute TiRobot in China, and has also signed up to an R&D agreement.”

In addition to Tinavi, there’s Beijing Bohui Weikang Technology, the creator of the Remebot stereotactic robot system for neurosurgery. “The Remebot’s six-axis robotic arms and CT/MRI compatible visual imaging are meant to improve the accuracy and reduce the invasiveness or neurosurgical procedures. details of which are scant, but the plan seems to be to use the device to help place orthopedic implants.”

A significant innovation in China includes the development of the Micro Hand S, A low-cost and easy-use robot system developed by Tianjin University.

Between 2014 and 2015, the Micro Hand S robot underwent significant clinical trials conducted on patients in the need of minimally invasive surgery. The trials reflected considerable positive outcomes (laparoscopic surgery) with no complications during the surgeries making the Micro Hand S system a safe and potential option for surgery in future.

But the surgical robot comes at a steep cost, with prices ranging between $600,000 and $2.5 million.

Intuitive Surgical’s da Vinci first entered China in 2014, and now there are more than 70 now in use on the Chinese mainland.

Taiwan
The Taiwan surgical robotics market already has a strong presence of leading players such as Intuitive Surgical, however, local players (such as Brain Navi Biotechnology) are also significantly expanding the market potential.

Brain Navi Biotechnology, a Taiwan based startup has recently designed and produced its product called NaoTrac, which is a robotic-assisted surgical system for brain surgery, the main function of which is to localize the positioning and guide the surgeon to the surgical targets without the use of external frames.

Currently, more than 70 percent of the hysterectomy cases are carried out with robotic surgery while the rest are done with laparoscopic techniques. In 2003, the Singapore General Hospital performed its first robotic assisted laparoscopic prostatectomy using the da Vinci Surgical System. Other private hospitals such as the Mount Elizabeth Hospital (purchased in 2004) and National University Hospital (in 2008) also perform robotic surgery in various application areas such as urology, gynecology and general surgery among others. Local distributors of da Vinci Surgical Systems are also providing assistance to train surgeons in advanced technique.

Startup companies are few. One highlight in particular is Endomaster Pte. Ltd. being the first of its kind to provide an innovative robotic assisted surgical system for minimally invasive endoscopic surgery.  The system was collaboratively developed by Dr. Louis Phee from Nanyang Technological University and Prof Ho Khek Yu from National University of Singapore.

India
According to the Vattikuti Foundation (a non-profit promoting robotic surgeries), currently utilizes a wide range of western-developed surgical robots, including the da Vinci. There are plans to install more than 200 surgical robots and increase the number of robot assisted surgeries to more than 20,000 in the next two years.

Currently, there are more than 50 surgical robots into action operated by more than 300 specialized robotic surgeons. An average of 700 robotic assisted surgeries are performed every month in the nation governing the growing demand for the minimally invasive technology.