Surviving COVID and flourishing through a trade war, Middle Kingdom seems ready once more to take on automation

Staying focused in a pandemic
In the COVID-spawned new normal, with global economies reeling and sales of industrial robots, cobots, and automation tech at new-normal lows, or worse, one place is thriving and looking more like the old normal than one riven by plague. That place, of course, is China.

China is resurgent, and with added gusto.  It’s kind of remarkable to watch it unfold. Given the pandemic and a Sino-America trade war of volatility, uncertainty and heavy tariffs, you’d think that China would be reeling. It’s not; it’s growing, and never really lost step with automating its manufacturing and logistics. Remarkably, the pandemic seems to have just slowed things down for a while.

As Reuters pointed out: “China’s recovery has been gaining momentum as pent-up demand, government stimulus and surprisingly resilient exports propel a rebound. Industrial firm profits grew 19.1 percent year-on-year in August to $89.8 billion. That compares with a 19.6 percent increase in July and is the fourth straight month of profit growth.”

An amazing recovery for a country with virtually no known allies or friends or anyone to lean on for help anywhere in the world, except for its own people. Other countries merely refer to themselves as China’s trading partners, and that’s seemingly all there is to the relationship. China has had to dig itself out of both the COVID and trade war holes…by itself, and has done a commendable job of it.

Of quarantines and robot sales
China is back to being China again. And once again as well, plane loads of foreign sales people with empty order books will soon enough trek its colossal landmass writing orders, and then fly home with those order books filled.

As everyone knows, China buys more industrial robots, automation gear and machine tools than anyone else; and it pays all its bills. That’s a sought-after customer type, and these days the prized customer is buying. Not yet as much as pre-COVID, but still a lot (see chart).

The U.S. and the EU will recover their robot-buying zest later than sooner. That’s a trend that will continue, and every maker of industrial robots, logistics robots, mobile robots, cobots, grippers, and robot parts are adding more pages to their sales books and readying to converge on China again. Many are already there.

In the face of adversity and snubs to friendship from other countries, the Chinese carry on remarkably well with a homegrown brand of determination and resiliency that’s quite admirable. Maybe just call it Chinese grit. And the world of automation has taken notice.
See related

The Sino-American trade war has made China stronger. “After reopening in late February and early March, China’s factories began an export blitz that is still gaining steam. Exports soared in July to their second-highest level ever, nearly matching the record-setting Christmas rush last December. The country has grabbed a much larger share of global markets this summer from other manufacturing nations, entrenching a dominance in trade that could last long after the world begins to recover from the pandemic.”

Reshoring manufacturing to the U.S. has been less than modest. According to a member survey by the U.S. China Business Council: 97 percent of U.S. businesses operating in China reported that their operations are profitable, and 87 percent said they had not relocated and had no plans to relocate any of their activities. More than three-quarters of U.S. firms say they are doing better or as well in China compared to overall operations globally. Revenue for U.S. firms in China is $500 billion; a kingly sum that companies are reluctant to leave behind.

Although 500,000 jobs have been reshored to the U.S., many were confronted by much higher U.S. labor costs, so ultimately, thousands of returning jobs detoured to Mexico or into the arms of an industrial robot. Many of those manufacturers who did leave lament leaving behind the skills, expertise, and speed that they relied upon in China, all the while praying that they don’t lose China’s massive customer base in the shuffle.

“Many companies that are moving some facilities out of China — including Samsung, Hasbro, Apple, Nintendo and GoPro — are relocating to countries where wages are even lower. While U.S. trade with China fell sharply last year, imports from Vietnam, Taiwan and Mexico swelled.” And now, during COVID, the U.S. has 300,000 fewer manufacturing jobs than when President Trump took office.

Not everything is a win-win for China these days along its supply chains. For example, China’s 90 percent share of assembling 160 million notebook PCs has shifted south to Vietnam and Thailand. By 2030, predicts Taiwan’s Market Intelligence & Consulting Institute (MIC), Southeast Asia will own 50 percent of that build. Southeast Asia is fast becoming the major beneficiary of the China exodus and an automation hotspot to boot.

Then again, China in the long run wants to get out of the assembly business; assembly operations don’t make much money and the assemblers, although quite skillful at what they do, have no future. When the iPhone 7 came out in 2016, IHS Markit calculated that of “the factory-cost estimate of $237.45 to assemble the iPhone 7, China earned $8.46, or 3.6 percent of the total. That includes a battery supplied by a Chinese company and the labor used for assembly.” The balance of $228.99 went to the U.S. and Japan with each taking a $68 cut, Taiwan got about $48, and a little under $17 went to South Korea. About $283 of gross profit from the retail price of about $649 for a 32GB model went straight to Apple’s treasure chest.

Other plans
President Xi, to meet what he called “a period of turbulence and transformation,” is promoting his “dual circulation initiative” in which China will build out a healthy cycle of “domestic demand and innovation as the main driver of the economy while maintaining foreign markets and investors as a second engine of growth.” Part of this initiative would see the country redoubling its efforts to build homegrown technology…”

It smacks of “Made in China 2025” on steroids, part of which has a giant focus on industrial automation and robotics, agriculture, pharmaceuticals, and healthcare. Additionally, the new initiative seems to be extended out to 2035. The next Five-Year Plan, the 14th such plan running from 2021-2025, is due out in March of 2021 and will undoubtedly reflect some or all of Xi’s new dual circulation initiative.

The red flag to automation tech suppliers is the emphasis on “homegrown” technology, which should put on notice foreign makers of industrial robots, cobots, and mobile logistics that a window is closing, and will try to close completely within a decade.

For added oomph to the homegrown technology push, China will expand on its FTZ or free trade zones, rolling out three new ones to the already bulked out 18 others around the country (see chart). 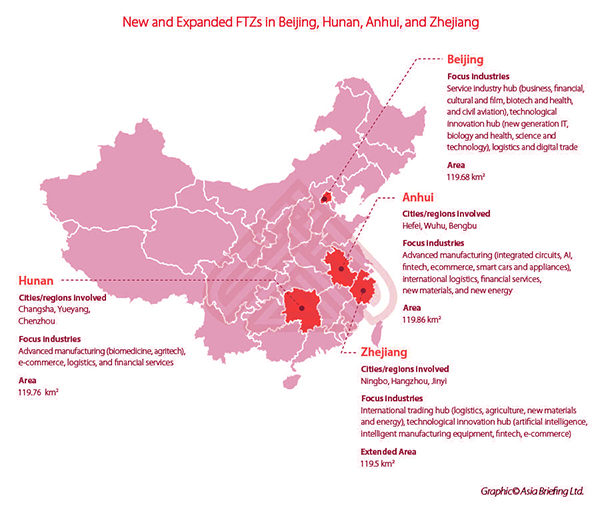 On September 21, China’s State Council announced that it will establish three new FTZs: Beijing, Hunan, and Anhui, and expand upon the FTZ in Zhejiang.

“The Zhejiang FTZ expansion will lead technical and digital innovation, while Anhui and Hunan will emphasize the high-quality development of their advanced manufacturing sectors.”

These three new FTZs have a lot of bearing on the technology aspects of President Xi’s dual circulation initiative. Of particular note for automation, robotics and logistics, in addition to the expansion at Zhejiang, are the new zones at Anhui and Hunan. “Zhejiang will prioritize smart logistics and e-commerce development for the purpose of creating an international trading hub.”

Meanwhile, “Anhui will focus on high-end technologies, such as integrated circuits, artificial intelligence (AI), fintech, and smart cars and appliances, whereas Hunan will concentrate on biomedicine, agritech, and e-commerce.”

If this is the shape that post-COVID automation is going to take in China going forward, then bet heavy that China will be back to ramming speed very soon.

And as business has begun to surge back, so too has consumer confidence followed in its wake. The Paris-based Ipsos Global Consumer Confidence Index has China leading major economies as it “rebounded to 72.9 points, becoming the only economy to show a gain from January.”

If this is what the flip side of COVID can look like—even without a vaccine— for all of the global developed economies, then bring it on.  Seems like the world could use a few more Chinas.
See related