Here’s what’s happening
Senators Charles Schumer (D-NY) and Todd Young (R-IN) introduced the bipartisan Endless Frontier Act on May 21, 2020.  Representatives Ro Khanna (D-CA) and Mike Gallagher (R-WI) introduced the House companion bill, HR 6978, the following day. The primary aims of the bill are to fund research, technology transfer, and workforce in 10 “key technology areas” defined in the bill. It provides $100 billion over 5 years to a new Technology Directorate in the renamed NSF – the National Science & Technology Foundation – and creates a new Deputy Director for Technology.

How dare they
Undoubtedly, one of the primary reasons that Made in China 2025 so mortified the U.S. government was that what the Chinese did was so American. Made in China 2025 was the way America, for 70 years, undertook critical projects: big government putting big money into big projects that would forever change America in a big way for the better. Made in China 2025 is a page right out of the American playbook.

It was an American playbook that first took shape when President Franklin D. Roosevelt asked America’s then-chief technology impresario Vannevar Bush to come up with a big plan. Roosevelt wrote to Bush: “New frontiers of the mind are before us, and if they are pioneered with the same vision, boldness, and drive with which we have waged this war we can create a fuller and more fruitful employment and a fuller and more fruitful life.”

Bush replied with his now famous Science, the Endless Frontier. It was the spiritual blueprint for America’s extraordinary rise to world leadership in science and technology…and the resulting “good” jobs that would transform the spiritual blueprint into a real-world phenomenon. Good jobs that would then become the backbone of America’s new middle class. The same middle class that today, as the forecasters put it, is in jeopardy of being “gutted” into extinction. 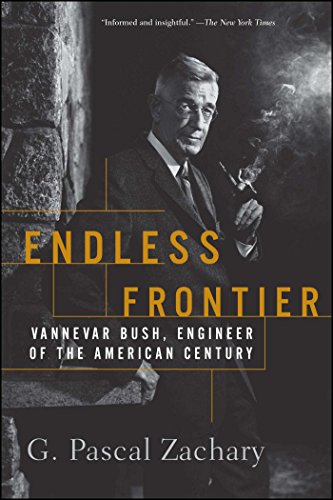 How appropriate then that the Endless Frontier Act (S. 3832) of 2020 uses Bush’s title for this new piece of legislation. The bipartisan bill is broad—probably overly so—it’s bold, flawed, and underfunded at $100 billion; Skopos Labs gives it a 3 percent chance of passing; and there are detractors popping out everywhere. In the jaded, cynical world that Capitol Hill has become over the last ten years or so, it’s easy to see how this bill would get bushwhacked.

But, as imperfect as it is, it exists. That’s triumph enough for now.

The bill’s authors, Senators Charles Schumer (D-NY) and Todd Young (R-IN), are not Vannevar Bush. Plus, anyone who has witnessed hearings on C-SPAN and cringed at how little America’s elected officials know about technology, can appreciate the fact that Schumer and Young, plus the five others who are now cosponsors, at least are aware of the country’s plight and are trying to do something about it. These guys need help; they need a Vannevar Bush to lead the show on Capitol Hill.

But, here in 2020, the 75th anniversary of Bush’s reply to Roosevelt, as well as the 70th anniversary of the National Science Foundation, both celebrated in the teeth of a pandemic, it’s at least heartening to know that seven senators are trying to rekindle Roosevelt’s “new frontiers of the mind” that need to be pioneered so that “we can create a fuller and more fruitful employment and a fuller and more fruitful life.”

The Future Knocks Once. Let’s Be Ready This Time
“We’re not a training nation”
Will COVID expose other vulnerabilities like the lack of U.S. “reskilling and worker training” capabilities?

See related:
Does America Need a Czar of Reskilling?
How should America go about reskilling millions of workers whose jobs are being targeted by automation and artificial intelligence?

Just as Made in China 2025 has ten tech areas that need addressing immediately if leadership is to be attained and maintained, the Endless Frontier’s list is nearly identical, saying:

“The Federal Government must catalyze United States innovation by boosting fundamental research investments focused on discovering, creating, commercializing, and producing new technologies to ensure the leadership of the United States in the industries of the future.”

High up on the list, just as it is with Made in China 2025 is “Robotics, automation, and advanced manufacturing.”

“At its core, Made in China 2025 has aimed to transform China into a “manufacturing superpower,” commented Elsa Kania, Adjunct Senior Fellow with the Technology and National Security Program at the Center for a New American Security.

“At a time when China’s economy is slowing,” she explains, “the embrace of such emerging industries and technologies is seen as a critical means to sustain and upgrade growth. For instance, the pursuit of advances in intelligent manufacturing is seen as vital to ensure future competitiveness against the backdrop of a new industrial revolution.”

That is squarely right out of the American playbook’s backstory of investments in the Internet, NASA, The Interstate Highway System, etc. It’s how big countries attack big problems.

For Schumer and Young it’s all about “Strengthening the leadership of the United States in critical technologies through fundamental research in the key technology focus areas.”

However, they do not overlook people, the country’s workers; they understand that people, all people, not just the innovators of technology, must get ready for a new tomorrow where new skills and capabilities will be a must.  In that, it differs markedly from Made in China 2025, or, for that matter, from Vannevar Bush’s own Science, The Endless Frontier.

Schumer and Young intend for their Endless Frontier Act:

‘‘(I) to develop the region’s skilled workforce through the training and retraining of workers and alignment of career technical training and educational programs in the region’s elementary and secondary schools and institutions of higher education;”

When Schumer and Young were researching and drawing up this bill, they could have easily overlooked those 34 words. They didn’t.

They may well become the most important 34 words in the entire bill.