Double-edged sword
One sure hallmark of global powerhouse economies is the large number of industrial robots deployed across their industries. Leaders like China, U.S., Japan, and Germany come to mind most often. A glaring exception is India, which is the fastest-growing trillion-dollar economy in the world and the fifth-largest overall, yet low on the totem pole of robot deployments.

Even with its billion-plus consumer base added to its economic clout, India is far from the top in industrial robots. Rather, it’s way down at number eleven (see chart). 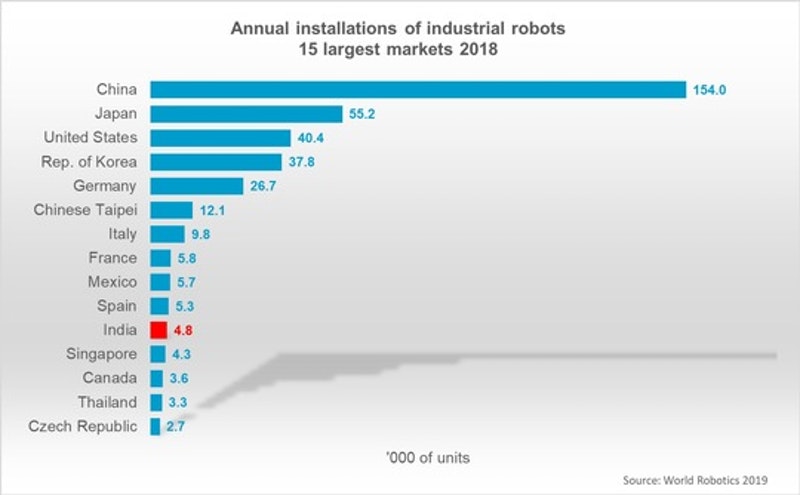 Ernst & Young’s Vijay Bhaskaran, says one reason for the slow uptake is “many processes in the Indian market are not very standardized and many businesses still run in an unstructured way with lower levels of digitization compared to other developed markets.”

When Indian companies do buy an industrial robot, most times it’s for the auto industry and nearly always from a foreign vendor; those leaders in India being FANUC, ABB, Kawasaki, Yasakawa and KUKA.

So yes, the uptake is slow, and what there is of it goes to foreign vendors.

Cases in point, the Royal Enfield Motors’ plant near Chennai bought from ABB; or Samsung’s new manufacturing plant in Noida deploying 80 Epson robots, or Mahindra and Mahindra’s factory in Nashik with a “robotic weld line” of foreign robots, or Maruti Suzuki India with 5,000 foreign robots working the weld and paint shops at its plants in Manesar and Gurgaon in Haryana.

Foreign vs. domestic industrial robots
However, IndustryARC’s India Industrial Robotics Market – Forecast (2019-2025) predicts a 13.3 percent CAGR through 2025. Certainly not a massive increase, but respectable enough to continue deployments trending upward, with many of the new deployments happening with non-automotive customers.

A headline from Quartz India from back in 2018 accurately tells the tale: What robots? India’s still far from being an automation nation. Since 2018, however, change is definitely on the rise.

The analysis for India sees growth in the “process automation market owing to the escalated demands from the general manufacturing, food & beverage, and pharmaceutical verticals.” The complexity of these new demands, the report points out, are “beyond the capacity of manual involvement.” Jobs only robots can do!

As overall sales escalate, foreign vendors will continue to do well, but the potential looms for India’s domestic robots to win more than a fair share of the market, especially among the country’s small and medium-sized enterprises (SMEs). According to the Ministry of Micro, Small and Medium Enterprises, there are 50 million SMEs in India, some 8 million more than China; SMEs account for 45 percent of industrial output and 40 percent of the country’s total exports, which is a massive slice of India’s $3 trillion in GDP.

Turning the tide
Most of the country’s SMEs are well-aware that competitive opportunities are almost entirely in smart manufacturing, which means artificial intelligence (AI), Industrial Internet of Things (IoT), robotics, and 3D printing), all of which are beginning to fundamentally transform production.

For example, the Royal Enfield plant’s competitive issues were speed and quality. According to a Bloomberg piece the robot painters reduced paint wastage by half, painted four times faster than humans and never missed a spot. Such eye-opening success for Royal Enfield resulted with the installation of thirteen more robots.

Certainly, India’s homegrown industrial robots could have a shot at sales to manufacturers like Royal Enfield if quality and price were on par with the foreign supplier.

Global leader, Universal Robots (UR), has a sizeable jump with cobot sales in India, having operated there since 2011; its first sale went to Bajaj Auto (100 cobots installed to date). However, even as late as 2018, UR’s general manager in India, Pradeep David, claimed, in an interview with Motown India, that UR had only 400 cobots installed in country (as of 2016).  Even at double or triple that number of cobot deployments, the overall cobot market in India, like the industrial robot market, is wide open for either domestic or foreign suppliers.

Homegrown champion
For SMEs looking to ramp up advantages in speed and quality, says Harish Chandraprakasam, director and CEO of MCI Robotics, the determining factors are price, ROI, and quality robotics. And he feels certain that his new (2017) line of industrial robots fits the bill exactly. Moreover, he feels confident that his lineup could well become the country’s go-to domestic champion for industrial robots.

Chandraprakasam says that he’s been preparing for an opportunity like this for many years. He spent ten years in the U.S. perfecting his craft as an automation engineer, robot designer and builder. Now back home in Chennai launching MCI Robotics, he feels that he has hit the sweet spot with just the right quality, precision, and price. With sales up 200 percent year-over-year, his plan for industrial robots made and designed entirely in India appears to be on the rise.

Brian Powell, vp of U.S.-based Precise Automation, who has known and worked with Chandraprakasam for nearly a decade, agrees. “There are two critical processes to make a new robot work and Harish showed mastery of both: tuning and calibration.

“Achieving peak performance in a robot requires tuning each axis,” adds Powell, “but also all six axes as a whole to avoid vibrations and find correct PID values.

“In addition, calibrating a robot properly requires a full understanding of all the variables of the mechanical design and creating a repeatable procedure that yields an accurate robot.  Based on the videos of Harish’s six-axis robot, he successfully applied his in-depth knowledge of robotics to produce a usable six-axis robot.”

Making high-quality, reasonably priced industrial robots wasn’t the first thing on his mind when he returned home. Rather, it was automating industrial processes. With years in the states, either at the University of Southern California working on a degree in intelligent robotics or later as a controls engineer, programming PLCs and designing control panels for a conveyor company and eventually heading the projects team, he had acquired a broad and deep skill set in automation.

He executed projects for the likes of JC Penny, Nordstrom, Big5 Sporting Goods, and McMaster-Carr Supply Company, programming sorting systems, bin picking lines, and transfer systems. He even did a stint with data storage provider, Xyratex, making systems for Seagate and Western Digital (since acquired by Seagate).

He felt certain that his U.S.-based automation experience would work well back home. Returning to Chennai in early 2012, he launched Malles Automated & Robotic Systems, a wholly-owned subsidiary of his family’s Malles Group.

Providing the necessary robotics for Malles Automation & Robotic Systems, he looked toward Kawasaki Robotics, an old friend from his days in San Jose, CA. Kawasaki’s Yasuhiko Hashimoto, who these days is Managing Executive Officer of Kawasaki Heavy Industries, was, back then, his boss and mentor, who gave the young roboticist a firm grounding in all things industrial robotics. The distillation of his automation and robotics training and experience formed the backbone of Malles Automation & Robotic Systems.

He says it didn’t take long for him to notice the rise of China’s own domestic industrial robotics industry. “Since I have the knowledge and experience in development of robots, I decided to develop our own robots under the brand name MCI Robotics; all designed and manufactured in India.”

He launched MCI Robotics in 2014, and by 2017 the company had rolled out its lineup. “We have seen our sales increase dramatically; and we are the only Indian robot manufacturer that makes a 6-axis articulated type, SCARA, Delta type, and dual articulated systems.” Such a comprehensive product line offers MCI flexibility to design and engineer automation solutions for most any industrial project or need.

“Cobots are the next big thing,” he’s quick to point out. “They are making a mark in India, especially Universal Robots (UR); but at issue in India is the cost. Even the Chinese ones are priced almost as much as UR,” he adds, mentioning AUBO and Elfin, and also Taiwan’s Techman Robot (subsidiary of Quanta Computer). “We’re seriously looking at our options for an MCI cobot. We have the engineering skill and capacity. So, it’s not a question of if, but when.”

With industrial robots and cobots both barely penetrating the massive industrial automation markets in India, the field is still virtually wide open for anyone—foreign or domestic—seeking to be its champion.

MCI Robotics has a good chance at pulling it off. GreyOrange, built from scratch by two Indian innovators, Samay Kohli and Akash Gupta, did it with logistics robots in Gurugram in 2011, vaulting from local to worldwide, and $30 million annually in sales.