“I congratulate my countrymen on the GST Bill being passed.
New Year, New Law, New India.”—Prime Minister Narendra Modi, One Nation, One Tax (2017)

“When we moved from one state to the other, it felt like moving from one country to another.”
—Ramesh Agarwal, chairman of New Delhi-based Agarwal Packers and Movers

The convoluted tax system, virtually unchanged since 1947, never made practical or economic sense, especially to warehouse owners like Shivkumar Rao, co-founder of Nagpur’s freight-forwarding company R&Y Logistics: “Our trucks used to cover 150 miles per day; now they’re doing up to 220…Every time you crossed a state boundary, you had to pay sales tax.” GST should change all that, he added.

Reworking the 71-year-old tax system will have the added benefit of boasting India’s already robust 6.7 percent GDP rate (FY18) by an additional 0.9% to 1.7%, according to the National Council of Applied Economic Research.

So why did such an anti-logistics system last so long in India? In India there are a thousand answers, most lost in the mists of seven decades of doing it wrong, and most of which have a hollow ring of having a very regional bias…and not good for the country. “The previous system encouraged manufacturers to distribute their goods from warehouses within each state,” suggests the Financial Times, “encouraging the growth of a huge, fragmented network of small warehouses.” With GST in place, FT’s headline says it all: India’s tax overhaul unleashes logistics revolution. 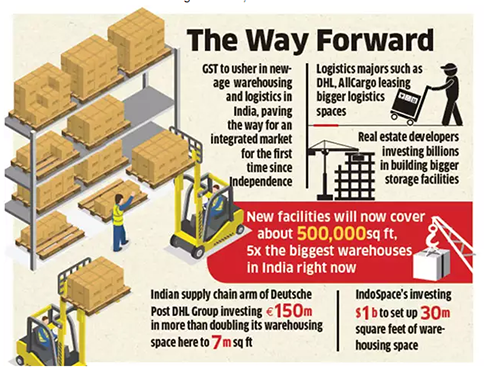 The boom: So who’s doing what?
Keyur Pandya, an analyst at brokerage Prabhudas Lilladher, sees both larger warehouses and distribution centers arising from the new, unified tax structure as well as a jump up in logistics automation technology that will accompany larger warehouses.

The founder of one provider of technology-driven, flexible warehouse services, Boxmyspace (founded in 2015), says: “We’re now seeing about 20 percent month-on-month growth in square footage, from 5 to 7 percent before GST.”

In a Quartz (India) interview, GreyOrange co-founder, Samay Kohli, thinks that warehouses will now go from many to fewer, but the size of each new facility will be four to ten times larger. “I think post GST, half-a-million square feet is going to be kind of the minimum threshold at which people will build,” he said. Wider geographies of India’s massive size will now be serviced by mammoth-size warehouses.

“The consolidation will incentivize the holding of inventory at select locations,” said V Balaji, CEO contract logistics at Avvashya CCI Logistics. The exercise will potentially lead to a 15 to 18 percent savings in logistics costs for a company, he added

All of which, of course, screams for robots and robot-driven automation that will be necessary to control and properly monetize expanded services from large warehouses and distribution centers.

Anuj Kapuria, founder of Hi-Tech Robotic Systemz, which transforms conventional forklifts into autonomous vehicles, reports that the “Indian warehousing industry is currently operating with a 15 percent shortfall in skilled forklift drivers…a problem that’ll worsen as facilities become bigger and increasingly clustered around strategic locations after the GST kicks in.” 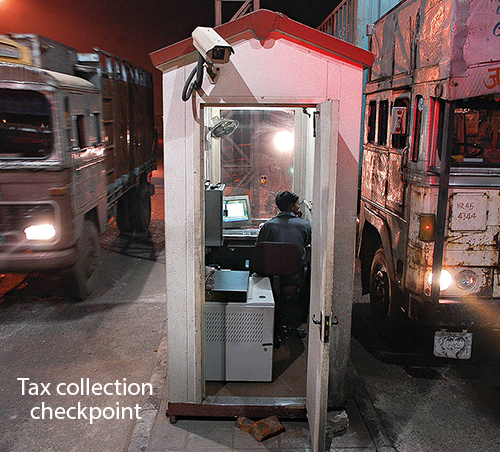 In the fast lane:

“Wild, Wild East” of robot sales
There are millions of square feet of warehouse space coming on line, most every square foot of which is in search of an automation solution.

All of the companies listed above, and many more as well, have a keen ear ready to weigh most any automation solution that comes their way.

Some, however, will not opt for machines when so much cheap labor is available. Frank Appel, the global CEO of DHL, is one of them. He said in an interview that the company would in the future carry out some pilot projects in India in the robotics space, pointing out, however, that abundance of human labor in India makes it more feasible to invest in manpower.

If the churn of ecommerce in India is anything like that of China, human labor just won’t cut it for DHL. It’s quickly going to become a case of pay me now or pay me later.

Like a modern Klondike Gold Rush, Indian logistics will soon witness foreign robot vendors and automation integrators in a madcap rush toward anything remotely resembling a warehouse. And like the Klondike, the gold is definitely there for the taking.

Hopefully, the Modi government will give its domestic robot builders some sort of competitive edge in getting their machines into play.

So far, One Nation, One Tax is playing big.