New-look FDI—tech with a future!—settles into Eastern Economic Corridor (EEC)

“We have missed the opportunity for the past three decades to take advantage of foreign direct investment.
Technologies have not been transferred to Thai firms as Thailand failed to promote technological localization.”
—Nipit Wongpunya, Chulalongkorn University’s faculty of economics

Filling the donut hole
One of the traditional ways to make friends in Southeast Asia and become part of the region’s future is to build factories on local real estate that employ local workers…Foreign Direct Investment (FDI).

It makes sense, and it’s been done for decades with great success for all parties involved. Living and working in the neighborhood shows commitment, and in return, garners lots of benefits from the local government.

Such automation tools as industrial robots, cobots, CNC machines, machine tools and 3D printers—the high-tech equipment that will power Industry 4.0—are the high-priority relationships sought in the newest rounds of FDI.

When the same industrial robot that is built in country goes to power automation at a local factory, it creates a new kind of relationship. It fills the donut hole that exists between a shipment of imported industrial robots and their deployment in local factories and businesses. That donut hole is where skilled workers, technicians, machinists, electricians, engineers, trainees and managers reside, which is, for the most part, totally absent with imported industrial robots. It’s the place where the middle class lives.

Siasun to put down roots in Thailand
Shenyang-based Siasun Robot & Automation Co. is one of these new relationships. Siasun is in talks with Thailand to acquire 470 acres (about the size of 400-plus football fields) in the country’s new Eastern Economic Corridor (EEC), itself an enormous chunk of real estate the size of Connecticut. 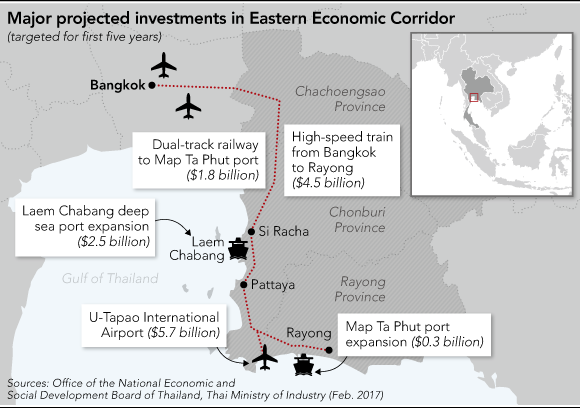 The objective for both Siasun and Thailand is to build out a “smart industrial park” on the property, says roboticist and EEC chief expert, Dr. Djitt Laowattana, who is also founder of FIBO, the Institute of Field Robotics, at King Mongut’s University of Technology.

Laowattana adds that Siasun has plans to establish an Industry 4.0 platform into which it will transfer many designs from its Shenyang operations, with the objective of aiding local manufacturers in adopting and investing in automation systems.

It’s interesting that a Chinese robot builder like Siasun is electing to move into the neighborhood. China went through the same growth pains twenty years ago when it induced overseas robot builders to build in country and required them to hire essential staff and management from the local populace.

It worked, not as well as it should, but well enough to have produced hundreds of thousands of trained line workers and management.

Siasun was born from that movement (founded in 2000) and has prospered, with, of course, heavy investment from government and technical guidance from the Chinese Academy of Sciences. Siasun now has lines of industrial robots, cobots, mobile robots, logistics robots, and service robots.

Laowattana, as the EEC’s “Chief Expert in Education & Technology Development” is the responsible party for “human infrastructure” in the EEC and in providing companies like Siasun with local workers having basic skills enough to work and train in Siasun’s planned robot and automation equipment factories.  The EEC, according to Laowattana, will need over 200,000 skilled and semi-skilled staff to power the intended “smart industrial park” and to feed local businesses in search of automation talent.

Total needed from vocational through PhD level through 2023, he sets at a whopping but enviable 400,000.

To meet those goals, he’s linked together a dozen Thai colleges, universities, and vocational institutions offering robotics, mechatronics, and automation degrees and training programs to serve as a feeder system; and through an MoU with Mitsubishi established a “Smart Factory Learning Center” for hands-on training in Industry 4.0 automation skills and IoT research.

Bosch (Germany) opened Thailand’s first smart factory in 2017 in the Hemaraj development zone, also in the east adjacent to the EEC. More smart factories are slated to come on line in the near future and all will need staff to properly run them. The Bosch plant has 800 employees. Thousands more will be needed if Thailand’s goal of Industry 4.0 is ever to be realized. Siam City Cement, a major Thai cement manufacturer, is currently building its “Digital Connected Plant”, which will also need high-caliber workers to staff its high-tech processes.

Laowattana’s colleague, Dr. Siridej Boonsaeng, Dean of the College of Advanced Manufacturing Innovation, King Mongkut’s Institute of Technology, puts it bluntly: “The future of production will be mass customization where data-driven AI and adaptable factory is the answer for survival.”  It’s not just good jobs for Thai workers, it’s survival for the country’s industries.

The neighborhood has powerful benefits
Although Thailand has earmarked $6 billion in direct investments for robotics and logistics, the country is offering generous benefits to foreign companies that set up shop in the neighborhood.

Phonkrit Thaveesoontorn, from Thailand’s Board of Investment (BOI), says that to spur such investment Thailand “offers incentives both to the demand side, manufacturers and factory operators, and to the supply side that provides AI and robotic-enabled services from processing and control system design to installation and commissioning.” Corporate income tax exemption of up to 13 years is one such benefit.

“To encourage the growth of the Thai automation sector, e.g. the supply side, while helping to improve overall industry efficiency, e.g. the demand side, investments in which the value of linkages to the Thai automation industry reaches at least 30% of total value of the automation system can enjoy a 3-year corporate tax exemption of up to 100% of the investment,” says Thaveesoontorn, “provided that they [foreign companies] apply for BOI approval by the end of 2020.”

High on the BOI’s list, in addition to industrial robots for smart factories, is agriculture. “Self-driving farm vehicles and the process of sorting and grading agricultural products,” he added to the BOI’s wish list.

By far the best benefit for any industrial robot or cobot manufacturer may well be customer preference for robots made in Thailand. If price and performance are relatively equal, Siasun could easily gain most favored vendor status throughout the country just by dint of its residing in the EEC.  The allure of modernizing a country’s manufacturing future with industrial robots and cobots made by its native sons and daughters is a powerful recommendation.