Maybe we should call it Neo-Ag

A “Google moment” for agriculture that’s ultra-precise, data-driven, and brimming with special-purpose robots is also powering lots of new thinking

With an inflection point predicted to arrive in 2024,
agricultural robots and drones are forecast to rapidly rise
to $35 billion industry by 2038. —IDTechEx

Neo-Ag convergence arrives
Is agriculture having a “Google moment”? Matt Barnard thinks so. Barnard is the CEO of Plenty, a U.S. startup that grows leafy green vegetables vertically—indoors!

As Barnard put it: “Just like Google benefited from the simultaneous combination of improved technology, better algorithms and masses of data, we are seeing the same.”

“Nearly one quarter of 2017’s ag tech investments were made by corporations or their venture capital arms, including those of giants Monsanto and Syngenta, up 7 percentage points from 2016.”

Agriculture’s “Google moment” is arriving in the form of autonomous farm vehicles that can seed, till, weed, and harvest, hyper-precision agriculture, pervasive automation, drones, GPS, drought-resistant crops, cloud communications, machine learning that can ID ripe and ready for picking from unripe, and the advent of 5G wireless to enable high-speed, broadband connectivity to rural communities.

Brain rush
Along with the tech, algorithms, and heaps of data, has come a brain rush of human ingenuity with insight enough to apply the “Google moment” to myriad new ideas. It certainly wasn’t a robot or algorithm that came up with growing leafy vegetables vertically. The tech is the catalyst enabling a solution.

The tech would allow Barnard to grow his vegetables in urban high-rise buildings directly adjacent to consumers living nearby in high-rise apartments. Being that close to consumers puts a whole new meaning to “from farm to fork”. 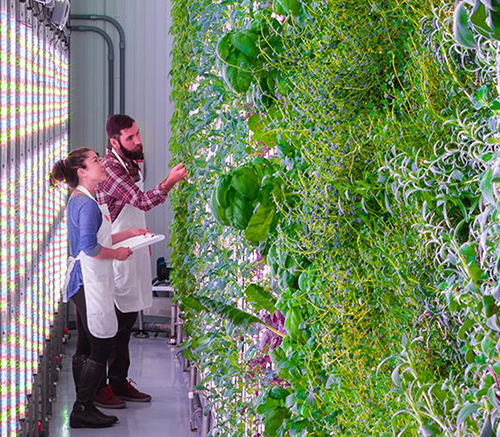 Barnard’s leafy greens use less land than traditional agriculture because Plenty’s crops are grown vertically. Additionally, Plenty’s “fields” have yields 350 times greater than open fields, use only one percent of the water, and do so without fertilizer, pesticides, and sun—lighting comes from LEDs.

What if the good citizens of Shanghai—all 24 million of them—could have all of their leafy green vegetables like bok choy, cai xin, water spinach, snow cabbage and watercress, as well as the other dozen or so commonly used greens in Chinese cuisine, all grown right in Shanghai? All grown in complete safety, free of soil and/or water-borne contaminants, and, according to Barnard, “totally delicious.”

“Today, with field-grown produce,” says Barnard, “30 to 45 percent of the final value at shelf is attributable to trucks and warehouses.” If the journey to the consumer was almost zero, prices would go down and shelf life up says Barnard.

Japan’s Spread is another indoor, urban farmer. It’s giant factory farm in Kameoka, Kyoto grows lettuce, and is just one of more than 200 “plant factories” in Japan capable of harvesting 20,000 heads of lettuce every day.

The pair are helping to develop the See and Spray robot, which, they claim, will cut herbicide use by 90 percent. The University of Illinois’ farmdoc report has the sum of fertilizer, seed, and pesticide/herbicide costs at $373 per acre in 2017.

Andrew Bate, Australian farmer and owner of SwarmFarm Robotics, is also deep into hunting weeds with robots on his 10,000 acre Queensland farm. Bate has developed a fleet of small robot weed hunters that he rents to farmers on a per-acre basis. 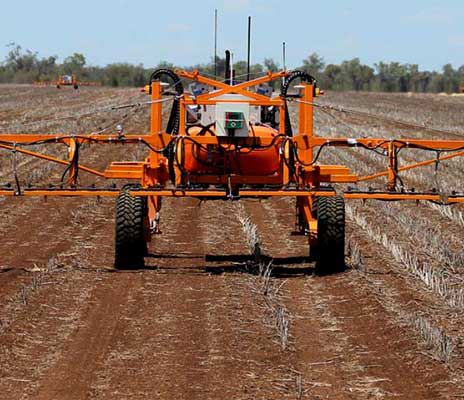 Rather than spraying weeds, one French company has its robots weed mechanically.  Naïo Technologies has begun selling four such robots of different sizes to farmers of lettuce, vegetables, or wine grapes. Naïo claims that its robots can reduce a weeding budget by 33 percent. 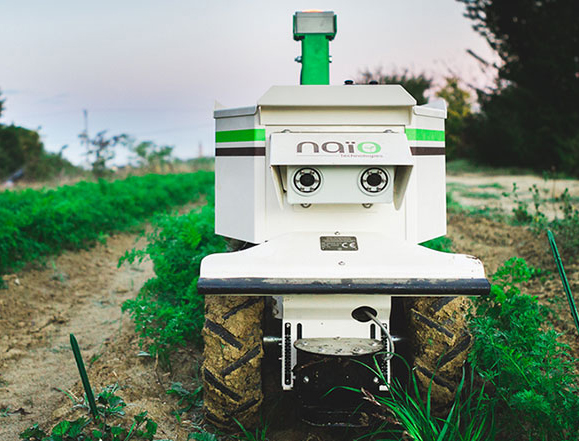 Pick a peck of pickled peppers
The most elusive farm chore for robot automation is picking fruit and vegetables. For an example of the size of the task, the State of Washington’s annual apple harvest sees 5 billion apples pulled individually from orchards…all by hand, mostly from migrant laborers whose numbers are falling steadily. China picks more fruit than that, and India more still. The need is mega-size and growing.

A recent Financial Times article, The robot revolution down on the farm, nicely frames the degree of difficulty for robot pickers. “Fruits and vegetables do not grow in uniform sizes or ripen at the same rate. Often the more sensors and cameras are fitted to a robot to improve its performance, the more fragile and unsuited for farming it becomes. Farm robots must be able to operate reliably amid dust, dirt, wind and varied temperatures.

“Another problem faced by robots aimed at picking fruits is that they cannot see through leaves or in the shadows cast by trees and branches. Plus it is hard to make a robot arm with enough dexterity and suppleness not to bruise or cut the fruit.”

Although there are a number of companies developing robots as pickers, no one has produced the killer app. Recent advances in machine learning can spot and pick the ripe from among the unripe, but as FT points out, none have aced the “dexterity and suppleness” test.

“Organized” agriculture
The great mighty mite of organized agriculture, the Netherlands, removes “the dust, dirt, wind and varied temperatures” by farming indoors; grows crops with ease of harvesting in mind, rather than an afterthought; and uses legions of indoor robot pickers.

Dutch know-how and innovation have powered this small country into the EU’s largest agri-food exporter and second only in the world to the U.S.

Of course, feeding the future can’t all be accomplished growing exclusively indoors, and the Dutch don’t. A good look at how both indoor and field agriculture are optimized in the Netherlands—and what a “Google moment” might look like for both—can be glimpsed at the goings-on at Wageningen University. What better place to see the future than through the eyes of the world’s No. 1 research center for agriculture and forestry (QS World University Rankings 2017) located right there in the heart of the world’s No. 2 agri-food exporter.

Two videos show it all
To better see and understand how the “Google moment” is arriving at Wageningen (and by extension, for the rest of us) is best experienced in a video tour, hearing from the researchers who are using the tools. The Financial Times has put together a solid look with just a 4-minute video (see below).

A second video about how and why the work done at Wageningen will impact the globe is elegantly put together in video No. 2. Video No. 2, which is longer and more in depth at over 9 minutes, but loaded with tons of numbers for stat lovers, is a quality production from a YouTube producer, NeoScribe (see below)

Future of farming
Artificial intelligence is settling into agriculture in fascinating new ways, and making friends with robots, AGVs and drones. In the process, it’s prodding lots of new thinking on new possibilities of feeding a hungry planet that has grown ever more concerned about feeding itself.  Neo-Ag may have arrived just in the nick of time.