The Weather Is Much Better in Shunde

Jitters in Shanghai
Salesmen and saleswomen can never sell enough. The numbers that they have to make are always stretching them to reach beyond their grasp; and as such, maybe the least bit of an apparent downturn in sales is cause for consternation and a long face.

Such was the sentiment hovering above the recent robot and automation show in Shanghai. The 20th China International Industry Fair 2018 (19-23 September) was a good place to see many long faces. …Lots of smiles as well.

Shanghai’s annual CIIF is the largest industrial fair in China, and 2018 saw it enjoy its 20th anniversary. The three million square feet of show space, housing some 3,000 exhibitors from 28 countries, attracts a crowd of over 280,000 to its nine massive venues:

·        Those nine venues cover the entire gamut of China’s reach for industrial dominance. And, quite naturally, AI has been added the overall mix as well.

What the experts say
Gongkong, a Beijing consultancy, thinks that growth in the industrial automation industry is “notably slower” in 2018 than in 2017.

Of course, it is. The blast off in China’s automation appetite in 2017 (See:  Blast Off in 2017) was such an off-the-charts buying rampage that it’s difficult to forecast.

Between 2011 and 2013, when China bought 6.6 gigatons of cement (more cement than the U.S. used in a hundred years), quarters where sales dipped by a skinny fraction were seen as catastrophic. China is a big place, and when it buys, it generally buys big. Robots are no different.

Morgan Stanley’s conversations with industrial automation and industrial robot vendors at the expo revealed an anticipated “revenue slide in the rest of 2018, and that demand may recover in early 2019…the Gongkong expert agrees and thinks the recovery may not start until 2H19.” The 2H19 date aligns well with the original 2H17 blast off date. Spring is a great time for new offensives.

Subsidies
Most notably, the ace in the hole for all automation and robot sales is the ready availability of government subsidies. Long faces at CIIF are temporary. The simple fact is that China’s central government is subsidizing the purchase of every robot, domestic or foreign made. That’s going to continue.

Chinese government subsidies, after widespread delays in the first eight months of 2018, will return in 4Q18 and onward; the major change being a switch from central to local government control of these funds.

Local governments will be launching their own “intelligent manufacturing business zones” and financing them directly, reports Morgan Stanley.

For example, Guangdong provincial government offered $137 billion in subsidies between 2015 and 2018 to help local manufacturers automate. That’s enormous money. But, Guangdong’s GDP is $1.1 trillion! Robots and automation have already begun to increase productivity and GDP, which makes a lot of sense for a $137 billion investment.

Factories by the millions!
Ren Yutong, executive president of the Guangdong Robotics Association, a government think tank, stated the obvious course of action for China:

“China is the factory of the world, and there are millions of manufacturers that still depend on traditional labor-intensive methods. If the country wants to maintain its top spot as a global exporter, each Chinese manufacturer has to start replacing humans with robots due to skyrocketing labor costs and the ageing population. [China] has already started running out of workers.”

Notice that “millions of manufacturers” is very telling of the size of China’s manufacturing challenge for automation, most of which is far from complete. Especially so for the 250,000 state-owned enterprises (SOEs) and their 5 million workers.

Foreign robot manufacturers—Japan, Korea, and Taiwan—will need to be aware of China’s domestic robot producers. The Chinese government’s plan is for 70 percent of the industrial robot supply to be built in China as of 2025. By then the country will have 1.8 million robots deployed—a tenfold increase over today—of which only 30 percent are native built.

European builders with plants in China (KUKA and ABB) were much more confident at CIIF. Their machines are preferred for quality and durability by large Chinese manufacturers, especially the auto industry; and sales have been brisk.

“Industries that have lagged in automating up to now, such as distribution, the product groups of foodstuffs, pharmaceuticals, cosmetics, and textiles, are viewed as promising fields.”

With only 3,000 cobots sold in all of 2017, according to government sources, cobots will soon experience an unprecedented awakening in sales.

Near totally overlooked in the blizzard of robot sales to date are specialized grippers or end-of-arm tools—the business end of every robot and cobot. China is basically unsophisticated as to the benefits of these high-end grippers, and as such, has opted for just about anything that’s priced right and works. Quality, like the Rolex of grippers, will have a profound effect on the quality of manufacturing; the advantages of which China is just beginning to notice.

For all of those nervous sales order books at CIIF, places like Guangdong, Zhejiang and many others will make for a bonanza!

From Shanghai to Shunde

It’s 769 miles south from Shanghai to Shunde, 906 miles if you’re driving, and a million miles from the glitter, crowds and endless rows of expo booths at CIIF. Shunde is what every tradeshows is all about: it’s where all the industrial robots and automation gear go to work. Shunde is where you can witness Made in China 2025 coming into being, and fully realize why Made in China 2025 is totally impossible without robot-driven automation.

Shunde, a city within the city of Foshun (population 7 million), sits on the Shunde River that drains into the Pearl River Delta.  Hong Kong and Shenzhen are close by to the south and Guangzhou just to the north.

Thirty square miles of Shunde, about the size of Disney World, is under construction to build a $1.5 billion high-tech industrial estate. The builders and occupants: Midea, the mega-size electrical appliance manufacturer (20 factories, 250 warehouses and 100,000 employees) together with its 2016 $5 billion acquisition, KUKA, world’s sixth largest robot producer.

The pair will build out three new ventures on the property, one of which is very telling about the future of robots in China. KUKA’s directing the production of a new complex for building robots; annual output is scheduled to be 75,000 industrial robots by 2024. 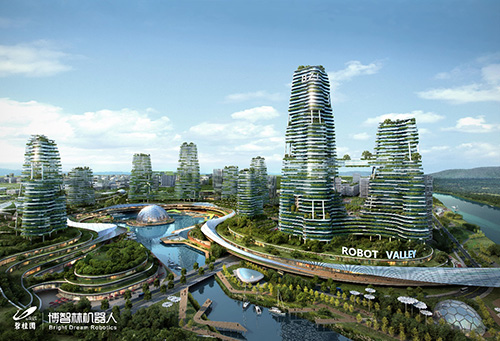 Just a few miles away, Jaten Robot & Automation has just opened a new factory of 430,000 square feet at a cost of $17.5 million. Jaten, a maker of AVGs, is expected to triple its current annual production to 10,000 robots. (See: Jaten video (South China Morning Press)).

As Chen Hongbo, a Jaten VP, flatly puts it: “It’s an irreversible trend to replace human labor with robots.” As such, robot sales are irreversible.

With all of this wild, hectic building going on in Shunde, it’s difficult to reconcile it with the jitters that were palpably evident at CIIF.

Maybe there’s some wisdom for future robot and automation trade shows to pump in live video feeds from places like Shunde onto giant-size screens throughout every expo hall. In that way the enormity of what’s being built out, together with the attending sales opportunities, are never far from the purview of every attendee, especially those holding order books.