Is It Time for a New Tradition?

The EMMA Coalition: Putting New Meaning into the 1st Monday in September

“Many of the jobs that will employ our children and grandchildren have yet to be created.
Our work for the past year has focused on helping job creators and government officials
begin planning for the future and the technology-induced shockwaves
that will change the future of employment.”
—Michael Lotito, co-chair of Littler’s Workplace Policy Institute

A New Meaning for Labor Day
Does anyone remember the true meaning of Labor Day? Like, why is it celebrated at all? Jay Zagorsky’s piece in The Conversation asks that very question.

Other than sleeping in a little later or sipping a frosty while lamenting the end of another summer, what else is there to this century-old American and Canadian holiday?

Tradition says that back in the 1890s the holiday was a one-day reprieve from the toil of non-stop labor. The 40-hour work week was still 40 years off in the Fair Labor Standards Act of 1938 that also included minimum wage, overtime pay and an end to oppressive conditions like no bathroom breaks, no benefits or sick pay and no safety standards.

Easy to see why those grim memories have been a forgotten part of an otherwise cheery, end-of-summer holiday.

Maybe it’s time for a new tradition. Instead of a holiday celebrating rescue from past labor struggles, maybe a holiday that honors the struggle to stave off future labor woes might be a worthy cause. Maybe a Labor Day that looks forward rather than back.

Annually, maybe the first Monday in September could be set aside to celebrate efforts to remedy humankind’s future of automation in the workplace—rescue from all that impending angst over robots, artificial intelligence and job loss that these days seemingly everyone is anticipating with dread.

A Labor Day that honors organizations and individuals who are making change happen for a better work future could well make for a super holiday.

The EMMA Coalition
One organization that may earn considerable praise at a future Labor Day is a nascent group recently organized in San Francisco and Washington, DC that calls itself The EMMA Coalition.

The non-profit, bi-partisan group carries the tag line: The Next-Collar Jobs for the Now Future. As of today, The EMMA Coalition exists only on paper, although it aspires to much more.  Of its mission, EMMA writes: “The focus of the Emma Coalition is to save capitalism by reforming labor markets reeling from the impact of AI, automation, and other new technologies.”

Saving capitalism and reforming labor markets is a mighty tall order for governments to take on, let alone for a new non-profit. An ambitious challenge, to say the least. It’s also remarkable and admirable that EMMA has chosen to joust with the mega-issues of our day.

The EMMA Coalition’s manifesto is a 9-page document that plainly lays out the genesis of the group and what it intends to do about the future of work and the workplace: The EMMA Coalition: The Next-Collar Jobs for the Now Future (August 2018).

EMMA was conceived by and is a product of two closely aligned organizations: Littler, a San Francisco-based law firm, through its Workplace Policy Institute, and Robotics, AI & Automation Practice Group, together with Washington, DC-based consultancy, Prime Policy Group.

Inspiration for EMMA’s formation and direction springs from the Littler Washington Roundtable (November of 2017), in which forty global experts took on technological disruption and the transformation of jobs, workplaces…and people (See: Workplace Transformation and the Reinvention of Work)

EMMA’s different
The EMMA Coalition begins its very interesting document by trotting out all the standard bad news about millions losing their jobs to artificial intelligence and robots by 2030; the kind of fearsome stats that seem to haunt us these days like a bad dream. EMMA names this impending scenario, TIDE, an acronym for the scary-sounding Technology-Induced Displacement of Employees.

However, this new non-profit then follows up TIDE with the truly unusual: The EMMA Coalition’s…solution! Yes, a solution. EMMA presents a solution, a remedy to the plight of TIDE. A solution…not scaremongering; that’s the unusual part.

That’s something one never hears from any quarter. 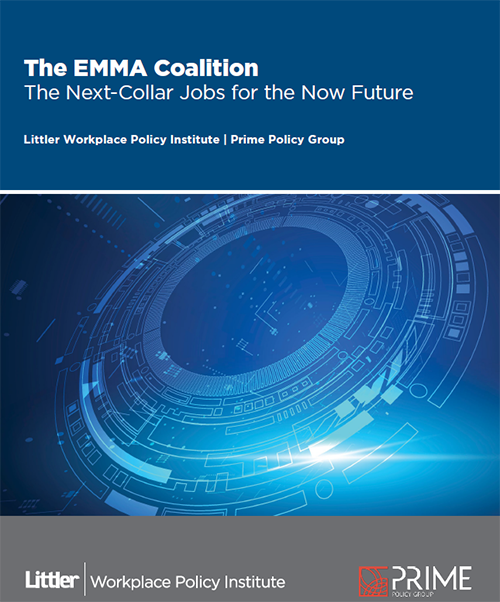 Then EMMA gets even more unusual: It offers to take on the burden of being a change agent; it volunteers itself to be the conduit for multiple forces to band together to actively “prepare the workforce for the coming TIDE through education, training, and engagement with policymakers.”

EMMA doesn’t mince words in stating how to avert the TIDE:

“Bluntly put, in order to save capitalism, we need to critically re-evaluate every aspect of the life cycle we presently define as work. If we do this, we will be able to use these remarkable new technologies to bring economic security to America’s workers and prosperity to its employers…Nothing less than the future of our workforce, our economy, and our society is at stake.”

Then EMMA’s hortation takes another unusual turn in volunteering itself—to become an active part of the solution—in taking up the challenge of TIDE:

“For years, organizations have been talking about, studying, and making predictions about the effects of automation on the global labor market. But for all the ink that has been spilled discussing the impact of the TIDE (technology-induced displacement of employees), there is no organization that is specifically devoted to helping employers and their workers prepare for the TIDE. The Emma Coalition will fill that glaring need.”

Aside from being true, that’s an unusually and refreshingly frank statement. Plus, it’s energetic, forward looking, and brimming with confidence.

Then, more of the unusual tumbles out as The EMMA Coalition offers to:

That’s a mouthful of action verbs for any one organization to take on: Organize, establish, outreach, form, and create.

However, there’s simply no faulting such a magnanimous offer, especially so because there’s no similar offer coming from anywhere else. That’s the amazing part: Why is it that only The EMMA Coalition has come forward with such a plan?

Fresh air
The EMMA Coalition is decidedly fresh air for a world grown bone weary of chasing AI demons around their workplaces and from the daily stress of workers fearing for the fragility of their careers because of technological disruption. The EMMA Coalition is stepping up right into the face of it all…and just in the nick of time.

The world is looking for action heroes ready and willing to contend with and make sense out of the roiling clash of automation, people and jobs.

As such, one cannot help but root for the success of the venture that The EMMA Coalition has cut out for itself. Short of reversing climate change or curing cancer, it’s the biggest of jobs.

And as big jobs go, it’s certainly more than admirable enough to put some real meaning back into Labor Day.