Make Way for the Kiva Killers: Geek+ Has Arrived

Remember KIVA Systems?
For all of those warehouses and distribution centers that have been pining away in vein for Kiva robots, ever since Kiva Systems was spirited out of the marketplace by Amazon back in 2012, the long wait is over.

Remember the shocking $775 million news flash? It made everyone an instant believer in robotics as Amazon ignited the robot revolution in a very big way. Amazon came out of nowhere, and was somehow instantly crowned a leader in logistics.

Well, the Kiva Killers have landed in North America, and we may be about to see, as Yogi Berra famously remarked, déjà vu all over again. 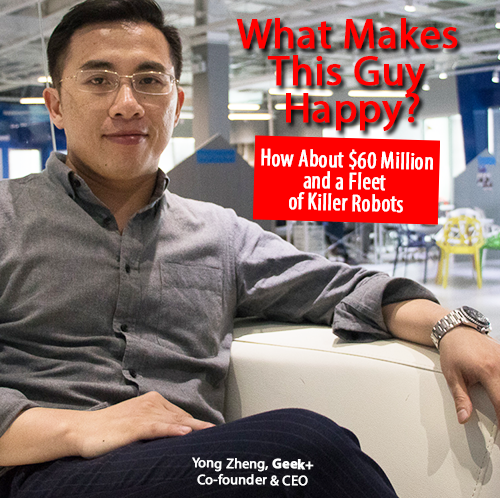 North American debut
The Kiva Killers, real name Geek+, hail from China (founded in 2015), and offer a lineup of logistics robots that the sleek Geek+ homepage bills as “Intelligent Robot Solutions for Logistics”.

The previous July, we had taken a look at the dire plight of warehouses/DCs throughout Asia: Robots and the Great Asian Warehouse Makeover​.

Robot logistics technology in China has now risen to the challenges of its legacy warehouse system, and magic is happening. Companies like Geek+, as well as another of China’s Kiva Killers, Quicktron, are being fast about the much-needed Great Asian Warehouse Makeover.

Now, North America will get a chance to kick the tires on the Geek+ product line at MODEX, April 9-12, at Atlanta’s World Congress Center. Even the MODEX theme of The Foolproof Way to Futureproof Your Business seems so very apt this year with Geek+ in the house.

Kiva paved the way
Although Kiva technology is now a bit dated, it was and still is an elegant concept with some very cool engineering. The braintrust behind the machine, Raff, Mick, and Pete (Raffaello D’Andrea, Mick Mountz, and Peter Wurman), got it right and scored big.

As D’Andrea enthused way back in 2008: “The beauty of our system is that you don’t have to walk over to the shelves to get things—the shelves come to you.”

“To architect the whole system,” he says, “it took us many, many late nights.”

Kiva robots were an idea whose time had come, although many needed convincing.

Market reaction to Kiva back in 2008 was a lot like this from William Vincent, a principal with Tompkins Associates, a supply-chain-technology consultancy in Orlando, Fla: “Kiva has an inherent degree of flexibility that a lot of the more traditional storage and picking technologies don’t. But many customers are scared of the latest whiz-bang toys and prefer to wait until they get a little bit more history.”

Vincent at al quickly got to ditch the fear factor and started buying. The lowly cobot then became the new “whiz-bang toy” to be feared, until it too muscled its way into acceptance and vigorous growth.

The best testimony as to the logistics-taming skills of Kiva-like robots is how adept they are at killing off a bloated bottom line.  Deutsche Bank estimates that Amazon’s warehouse robots have cut picking cycle times from 60 to 75 minutes to roughly 15 minutes; that inventory space grew 50 percent per warehouse due to smarter use of space; and that Amazon saved over $20 million per warehouse using Kiva robots.

Geek+ has some mighty big shoes to fill.

Geek+
Geek+ is a subsidiary of the behemoth Suning Group (Suning.com: 002024:CZ). The same Suning Group with thousands of retail outlets, automated warehouses, and massive e-commerce presence that ministers to the BtoC needs in nearly every province in China (Alibaba has a $4.6 billion investment in Suning Group).

Geek+ and its band of 300 staff develop robots exclusively for logistics, and by the look of their extensive, multi-robot product line, they have really thought through what it means and what it takes to ship anything anywhere.  All of which puts them not only in the category of Kiva Killer but also, more broadly, developers of total logistics solutions.

Investors have taken a keen eye to this young company. Last July it scored $60 million in Series B financing, led by an affiliate of Warburg Pincus; funding that also included Volcanics Venture.

The company’s founder and CEO, Yong Zheng, said at the time: “This round of financing will help us upgrade our business in three aspects. Firstly, we will accelerate the upgrading of our logistics robotics products and expand product offerings to cover more applications. Secondly, we will accelerate our geographical expansion and industry coverage to provide our one-stop intelligent logistics system and operation solutions to more customers. Thirdly, we will start exploring overseas markets through multiple channels.”

Well, here they are at MODEX accelerating “geographical expansion and industry coverage”. Go kick the tires.

Strangely though, by the look of the company’s teeny MODEX booth (10’x20’), they’re sure to look a bit cramped. Then too, tucked away  in a far corner of the 600 Aisle, adjacent to the food concessions, restrooms and exits, they may also be a bit shy…and maybe get bypassed by the bulk of the logistics crowds in the Fulfillment & Delivery Solutions area, the Transportation & Logistics Solutions Center, and the choice MODEX Backyard, all three of which are quite far from the 600 Aisle.

Although they are a small speck amid the crowded galaxy of MODEX exhibitor booths, Geek+ in the very near future is sure to make for itself a very large presence in logistics in North America.

Actually, all Geek+ needs is for Jeff Bezos to drop by.