Is Esben Østergaard the Henry Ford of Robotics?

Esben and Henry
Henry Ford didn’t invent the automobile.  Better, he invented the Model T, which, in becoming the most popular and most manufactured automobile of its time, created the automobile industry.

Esben Østergaard didn’t invent the cobot. Better, he invented the UR5, which, in becoming the most popular and most manufactured cobot of its time, created the cobot industry.

Ford democratized driving for just about anyone.

Østergaard is doing the same for manufacturing, especially for SMEs who would be hard-pressed otherwise to automate any part of their businesses without access to a relatively inexpensive, people-friendly cobot.

In sum, Østergaard and his robot breakthrough revolutionized industrial robotics with the cobot as an everyman tool, which in turn created global demand for this elegantly simple machine that looks oddly similar to a giant juice squeezer from Ikea, which, at $35k for the UR5, is eminently affordable for most SMEs, plus it sports an ROI that’s well under one year. If a company is looking to increase productivity and profit through automation, a cobot is just about as irresistible as it gets.

Here at Asian Robotics Review we’re more than impressed with what Østergaard and his revolutionary UR line are about and have accomplished; they made our The A-List: Most Influential Robots in the World. In short, we’re fans.

What about the “Innovator’s Dilemma”?
Østergaard has come a long way from his time in 2005 when he and two grad school buddies, Kasper Støy and Kristian Kassow, in a drafty warehouse in Odense, set about inventing “robot technology accessible to small and medium-sized enterprises.” They sold their first robot in 2008, right in the teeth of the financial and economic crash. Ouch!

Universal Robots survived and did well.

Suddenly, Østergaard is a multi-millionaire.

As would be expected and just as suddenly, lots of cobot competition have popped up seemingly everywhere; the current edition of Robotiq’s Collaborative Robots Buyer’s Guide lists over forty!

Now what? Will Esben and his mates fall foul of Clayton Christensen’s Innovator’s Dilemma where “market leaders don’t recognize when to jump to the next wave of innovation in their respective industries”?

Can Universal Robots maintain its blistering 60 percent market share or will the “lookalikes” chip away and eventually completely erode UR’s leadership? 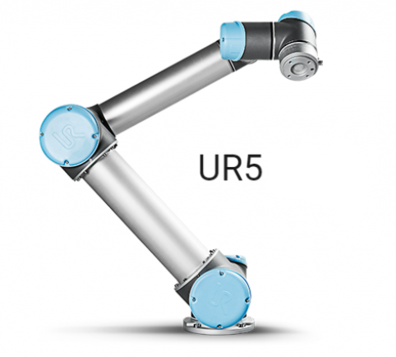 Chatting with Esben
I’ve known Esben since 2012, we sporadically cross paths and each time we do I try to get an update.

The Robotiq User Conference (September 11-13) was such a path crossing. We made eye contact at the breakfast buffet, right above a pile of sausage links. He was a keynote speaker and then had a flight out of town at 5:00PM…and a tight schedule in between. We’d have to scramble a bit to make time to chat.

The hotel bar had an adjacent quiet room all with leather-bound furniture and diffused light. Perfect for a sit down.

Esben is a well-known robot revolutionary who has been written about dozens of times. His own blog on Industry 5.0, and maybe the interview by Joanne Pransky are best to throw light on his early days, high-tech motivations, and Teradyne buyout.

Me, I was interested in three things: 1. What’s the next step for cobots: AI for “smart” cobots? 2. How will Universal address the onrush of competition? 3.  Expanding revenue opportunities in Asia (maybe even a UR factory in Asia).

First off, it was good to see that his nouveau millions hadn’t gone to his head. He was still the same guy: still liked gray suits and skinny ties…or no tie, was still a robot revolutionary, still humble, still a humanist, and still funny. All of which convinced me that this guy is still passionate about grinding out more imaginative robot engineering.

Very familiar with artificial intelligence (his PhD work was steeped in AI), he sees AI as a human assistant. Big data, machine learning are fine for optimizing automated processes, but “can’t automate what good quality looks like.” There always needs to be a human in the loop.

“I don’t think that AI alone or with robots can produce the value that a consumer wants.” That value is always human centered with cobots and AI merely the tools used to attain that end. Interestingly, he liked referring to cobots and AI as other “tools in the toolbox”. That, of course, definitely conjures up a human using those tools. As a humanist, he doesn’t have in his worldview of things automated factories full of smart robots and devoid of humans. “Robots and machines can’t do it alone.” Humans are still a big part of manufacturing, robot-driven or otherwise.

It’s a position that he also stated in his Robotiq keynote. He’s not blown away by all the AI hype that has been washing through the world of robots. He’s aware of AI’s capabilities, but believes that humans, lots of them, will still be a part of manufacturing for decades to come.

And the competition? Those forty other cobot makers out there? What if they embrace AI more robustly and thereby gain market share over UR?

He believes in his cobot lineup and doesn’t mind competing head on. However, he’s high on two advantages that none of the cobot competition can match: service and education.

First, Universal Robots+ which the UR site describes as “an online showroom, providing you with cutting-edge products to customize a UR robot application that perfectly meets your requirements.”

In other words, every cobot deployment is different in some respects, each needs to tweak its set-up with a few special add-on tools or devices, say, soft grippers vs. hard grippers. UR’s global service offering and Universal Robots+ presents unmatched value added to customize any cobot to exactly match the job to be performed.

Secondly, cobots are new in the world of manufacturing, especially for SMEs. As such, education is a key differentiator. Universal Robots Academy offers online, hands-on learning via interactive simulations.” In short, how to use the “tools in the toolbox” even before you buy because it’s all free.

Esben claims that there are 12,000 enrollees in the Academy; and, he says quite proudly, it takes only a quick 87 minutes to teach anyone to program his cobots.

Expanding the footprint
According to the Teradyne annual report, UR derived 40 percent of its revenue from Europe and 20 percent from Asia in 2016. A split that to me looked lopsided, especially with Asia being the largest industrial robot buyer in the world, which will rapidly increase its share in the near future. China alone will buy 100,000 industrial robots in 2017.

Korea, Japan, and Taiwan, collectively with millions of SMEs looking to automate, as well as facing severe labor shortages, would be prime sales targets; and even more so over time, the ASEAN, which is ten countries with millions more SMEs. A larger Asian footprint could well mean another $20 million in revenue.

With a dozen robot manufacturers already in residence in Asia, with each sporting one or more cobots in its catalog, Asian cobot developers could well offer formidable competition.

He was well aware of the opportunity that Asia presents and that UR is looking to expand its presence there…and understood the need for speed.

I suggested, without really expecting an answer, that it might be time to think about Universal Robots putting up a cobot factory in Asia.

I didn’t get one.

While writing this article, I got an email from the Royal Thai Embassy in Washington, DC. The first sentence read: “Thailand’s government approved a master plan last week to develop a robotics industry with the goal of drawing more than $2 billion in investments over the next five years as part of its Thailand 4.0 advanced development national strategy.”

That’s opportunity with a capital “O” for a cobot manufacturer to set up shop for a very bright future.

A perfect scenario for Mr. Cobot.​