When HR starts handing out AR displays to every new hire, productivity could well jump off the charts. Cobot and human worker teams could benefit hugely

From collaboration to cooperation
A recent article in Harvard Business Review, Augmented Reality Is Already Improving Worker Performance, readily shows the early-on impact of workers enhancing their job performance with augmented reality (AR). As industrial AR matures—big breakout in 2013 with VW’s MARTA program—more early adopters and applications will begin to fill out the industrial landscape.

Investors have seen the light as AR investments topped the billion dollar mark($1.1 billion) for the first time in 2016.

Part of that investor interest is driven by AR being forecast to become a $162 billion industry by 2020.

With the U.S. and other advanced economies suffering severe drops in productivity growth since the great recession, a 34 percent productivity increase (or even a fraction of that number) might well be welcomed as bright light at the end of a long dark tunnel.

In April at Chicago’s ProMat, Universal Robots demonstrated how a cobot and a human worker could utilize AR to “cooperatively” assemble an automobile’s door panel.

The ProMat/Universal demo is a harbinger of things to come in the cobot domain, especially for SMEs who are generally short-staffed, short on cash, and need to wear many hats to get the job done on time and on budget. With AR, untrained employees become near-instantaneous veterans, while a worker experienced on one job can be quickly gain expertise for multiple other job functions.

Upskilling
As the HBR authors point out in making a strong case for AR:

“One of the best examples of this type of partnership is the industrial use of augmented reality (AR) smart glasses in manufacturing, warehousing, and field service environments that overlay computer-generated video, graphic, or text information onto physical objects — for example, step-by-step repair instructions hovering over a machine part, visually guiding a worker through the job.”

What is augmented reality (AR)
“In 1990, Boeing researcher Tom Caudell first coined the term ‘augmented reality’       to describe a digital display used by aircraft electricians that blended virtual       graphics onto a physical reality. As for the computer science world’s definition of     augmented reality (AR) though, it’s more detailed, but essentially the same: Augmented reality is the interaction of superimposed graphics, audio and other sense enhancements over a real-world environment that’s displayed in real-time.

The advantages of AR are striking: This side-by-side video comparison from GE shows a worker increasing performance by a whopping 34 percent…the very first time he ever used AR. Such out-of-the-box productivity is already getting lots of attention from both large and small manufacturers and service groups: 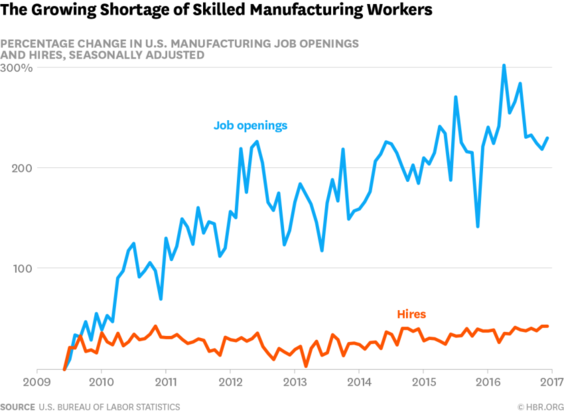 If AR can offer up an “overlay [of] computer-generated video, graphic, or text information onto physical objects,” then “heightened” vision would be the ability to also see in UV-imaging, X-ray imaging, or even terahertz imaging. Each of which add new dimensions from observation to QCing a job process during manufacture.

A cobot that is machine tending, say, a CNC process could communicate more than just a piece-work tally of what is going on; the human, assisted by “heightened” AR, could delve into a qualitative inspection of the manufactured product, its raw materials, and the quality and consistency of quality from part to part over time. AR overseeing a cobot tending a 3D printing operation could QC both the cobot’s operation as well as QC layers during the additive printing process that the cobot is tending.

Indispensable to the cobot/AR interaction would be artificial intelligence (AI) added to the cobot’s functionality. The cobot’s machine learning could extract data from its manufacturing process and transform it into knowledge for the AR-equipped human; or it could interpret and suggest modifications of its actions for the AR system.

Such a combination of cobot, AR and AI adds a formidable ally in what’s becoming a looming storm in the shortage of skilled manufacturing workers: AR permits a skilled job to be presided over by a less-skilled worker.

The Manufacturing Institute and Deloitte concluded that the U.S. needs 3.4 million workers; a number that is projected to fall short by two million workers.

Cobots and AR-equipped workers could well be not only a good solution to shortages in manpower but also to “upskilling” of workers and a direct method of gaining a better understanding and control over the manufacturing process.

It’s been the experience of GE and other industrial companies, Boeing for another, that “combinations of humans and machines outperform either working alone. Wearable augmented reality devices are especially powerful.” AR-improved industrial productivity has ranged from 25 percent to 34 percent, numbers that are too crazy large to overlook as a flukes.

Throw a tireless, exacting machine like a cobot into the mix and efficiency and speed are added to the productivity equation.

“The workforce must become more technologically adept to keep up…,” says Dr. Jeremy Marvel, research scientist and project leader at the U.S. National Institute of Standards and Technology (NIST).

“Collaborative robots are just one part of this new face of manufacturing. The entire U.S. manufacturing supply chain is slated to grow with the technology, with an increasingly skilled workforce producing better quality goods cheaper, faster, and more efficiently than they are now. This, in turn, drives innovation and competitiveness.”

Marvel’s “increasingly skilled workforce” may in large measure evolve from disruptive AR products like John Werner’s $949 Meta 2 or others more powerful and tech savvy than Werner’s.

If so, every new-hire orientation kit may well come with an AR display or pair of smart glasses simply because the tech makes the worker better. Why not build adaptability into a workforce from day one?

Conversely, having AR in the house, may be a force that expands the abilities of cobots. Just as additions like camera integration to cobots allowed them to recognize and track objects, and how force-sensing enabled a cobots’ deft touch, so too over time, AR in the tech mix may help evolve the cobot once again.

All of which may form a virtuous circle of falling prices for cobots leading to acquisitions of new technology like AR, which expands the capabilities of cobots, which then interests more new customers in cobots, which then increases sales and drives the price of a cobot further down.

That sounds like good news for everyone, including those concerned over tumbling productivity.