What next for the Jack Ma effect? How about the Alibaba of education?

“Machines will do what human beings are incapable of doing. Machines will partner and cooperate with humans,
rather than become mankind’s biggest enemy.” —Jack Ma, Zhengzhou, China (April 24, 2017)

The Alibaba of education, maybe?
Jack Ma’s life could easily be a fantastically inspirational children’s book.

Coming from a poor but happy family, being small, being different, being rejected, being considered a “nobody”, and then rising above it all to become a high-tech icon with a net worth of $40 billion, according to Bloomberg’s Billionaires Index. Yeah, that’s the stuff for any young mind’s dreamscape to eat up like breakfast cereal. 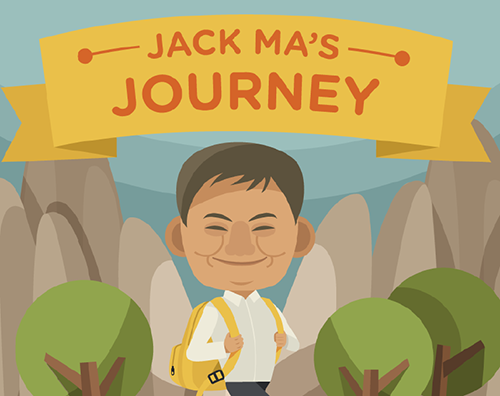 But what if this billionaire, high-tech icon—at the height of his famously-admired and storied career—retired on his 54th birthday and moved on to something else completely different? Well, that would be a fantastically inspirational book for the rest of us.

Amazingly, that’s exactly what Jack Ma has announced as his birthday present to himself for 2018. Something he’s been planning for ten years, he says. Next year, at age 55, he’ll be off into his new calling, whatever that calling shapes up as between now and 2019.

At the top of his game as an e-commerce empire builder—and beloved and admired by millions because of it—he’s stepping aside from selling stuff and into the well-planned arms of educational philanthropy.

Asia’s best pitchman for robots, automation and disruptive transformation is going back to his avowed first love: teaching. A former English teacher, who, he says of himself, loves to talk and meet people, just may be taking all of that into his new career.

Back in 2016, in his annual letter to stockholders, Ma wrote:  “Throughout history, technological disruptions have followed similar trajectories: 20 years of technological disruption followed by 30 years of further rapid change as new technologies are applied throughout society.” Those three decades are now upon us, according to Ma. Good time for an educational philanthropy to arise to help us through it all “as new technologies are applied throughout society.”

He must be expecting a long next couple of decades, because he told Bloomberg TV (see video) that he’s made it a point of retiring while relatively young and not waiting too long as he says Bill Gates did.

Who doesn’t need to learn a little of that?

Maybe something to do with his pronouncement at Zhengzhou last year: “Machines will do what human beings are incapable of doing. Machines will partner and cooperate with humans, rather than become mankind’s biggest enemy.”

China’s automation bellwether
There are 8760 hours in a year. Last year, Jack Ma spent 800 of them in an airplane going places, meeting people, shaking hands, attending speeches, making speeches,  submitting to selfie requests, and eating way too many fancy meals.

The kid from Hangzhou (born 马云 (Mǎ Yún)), who early on was rejected for work by KFC, rejected for education by Harvard, and learned to speak English while a hotel guide for nine years, is on the biggest of big-time rolls, where everyone jams into rooms to catch a glimpse of him and to hear him speak his mind. 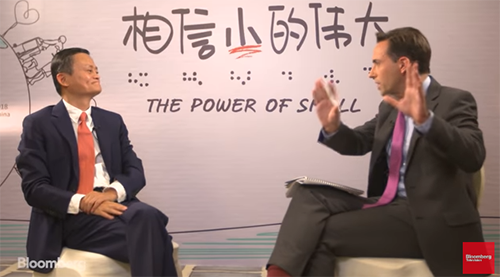 Speaking his mind is what he does best. And when he does open up, he’s Asia’s best pitchman for robots, automation and the disruptive transformation that will affect more than half the planet’s population.

People believe what he says, probably because he’s lived it and made it happen once already. In 1999, in his cramped Hangzhou apartment, Ma and eighteen friends started the Chinese company with the Arabic name Alibaba.

Nineteen years on, he’s executive chairman of Alibaba Group, which has a market value of $400 billion , with his own personal net worth a staggering $40 billion.

He’s come far. To whit, a super children’s book. And if he ends up educating the world into harmony with the machinery of automation, he’ll have earned eternal thanks from the rest of us…and definitely a made-for-TV movie on how he pulled it off.

Long-time friend and biographer, Duncan Clark, attributes Alibaba’s mammoth Internet success to Ma’s gut instincts in realizing at a very early stage that going online could: “Open up new markets overseas for the small traders and manufacturers he lived amongst, people he understood all too well from having previously supplemented his meager earnings as an English teacher by buying and selling plastic carpets on the streets.”

This time around Ma is forecasting the coming world of automation, with its millions of smart robots forming the infrastructure necessary to power an even grander vision of Alibaba’s e-commerce future, and that of the world at large as well. A future impossible to serve without robot-driven automation; a future in which Alibaba is promising to create over the next twenty years 10 million profitable businesses and 100 million new jobs.

China in the Alps
In an interview at Davos (2017), he claimed that Alibaba has directly and indirectly created 14 million jobs already. During the same interview he queried: Why not a billion new businesses worldwide, why not billions of new jobs? At which he shrugged and looked around at the audience as if checking for a chorus of no to arise. The room was quiet, amused and happy, basking in his confidence. They believed him.

In 800 hours of going from group to group, his stage appearances are now regularly Jack Ma verbal magic shows filled with the energy of his ready wit, enthusiasm for small businesses, and his passion for the people who take chances starting those small businesses, all of which are liberally sprinkled with killer data undoubtedly supplied by his Alibaba Group research team.

His knock on the U.S. blowing $14 trillion in fighting wars over the past 30 years rather than investing in infrastructure at home was an Alibaba research team gem that he adroitly pulled the pin on and rolled across the stage.

Everyone’s listening now
Jack Ma is both effervescent and frank, which gets him high marks with just about everyone, but sometimes he’s brutally frank, as he was at a  China Entrepreneur Club entrepreneurship conference in Zhengzhou, saying that society is in for a rough ride. “In the next 30 years, the world will see much more pain than happiness,” he told the crowd.

Exactly what is in Ma’s gathering storm of woe that’s going to cause so much unhappiness is the great unspoken that’s increasingly on everyone’s mind these days.

Hearing only vague generalities from leaders and captains of industry or stark casualty numbers from researchers and the media, people are apprehensive about the future of people, especially when they hear unhappiness and machines used in the same sentence.

Jack Ma did exactly that and made instant headlines at Zhengzhou.

“Fifteen years ago,” he says, “I gave speeches 200 or 300 times reminding everyone the Internet will impact all industries, but people didn’t listen because I was a nobody.”

They’re listening now. And now that he has the ears of the world, he may turn his new educational bent into a hybrid of online wizardry and learning: how about the Alibaba of education?