Robotics & Automation in a “New” India

The face of a “new” India is clearly visible, yet will it emerge amid steep challenges?

“I give 10 years for labor-intensive manufacturing to survive in its present form before machines take over.”
—Tharman Shanmugaratnam, Chairman, Policy Advisory Committee, International Monetary Fund

Is there a “new” India emerging?
For the first time in over fifty years, India is faced with an unprecedented influx of foreign direct investment (FDI), venture capital inflows, government financing, high-tech startups, and advanced manufacturing and logistics technology.

An era of success seems to be at hand, but can India measure up to the formidable challenges ahead?

The wave west
According to a report from Standard Chartered, China’s wage costs are on the rise, and the center of gravity of low-cost manufacturing looks set to trend west from coastal China, to inland China, to ASEAN, to India, Bangladesh and eventually to Africa.

India needs to catch the wave of low-cost manufacturing before it blows past on its way west. Africa beckons from across the Indian Ocean.

In the end, the reality is that all low-cost manufacturing worldwide seems to be a time-limited activity that may well disappear faster than anyone ever expected. But for the moment, it is here with us, its huge, it employs countless millions, and it’s on the move.

Next stop: India?
The hunt for cheap, temporary labor is arriving.

Already, places like Sri City, an industrial park in India’s southern state of Andhra Pradesh, are seeing a rapid incursion of Chinese companies: Lenovo, Gionee, Vivo and Xiaomi have each put up production facilities in India over the last year. Another, Xi’an LONGi, will invest $225 million to set up a facility to make solar cells and components.

Terry Gou’s Foxconn has met with Maharashtra Chief Minister Devendra Fadnavis about building a cell phone manufacturing facility for 50,000 workers on 1,200 acres in Maharashtra. Apple is also bringing manufacturing to India, having met with the government of Karnataka to set up a plant in Bengaluru.

The strategy behind the build out of different types of manufacturing seems to be following a path relative to the per capita income of India’s labor force (red notations in map below). 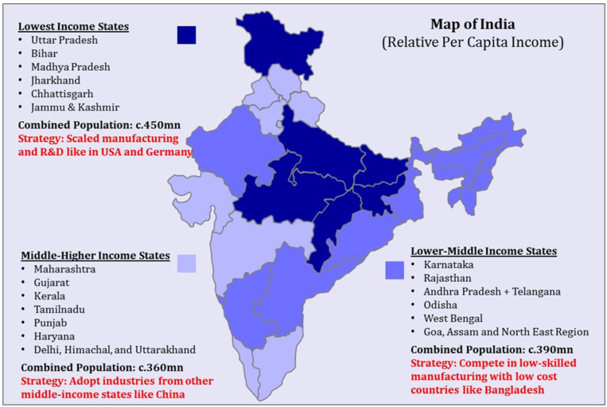 “There’s the threat of India losing out,” reports Madhur Jha, senior economist at Standard Chartered: “Other countries are slightly more developed, have a stronger manufacturing base, and are moving toward automation more quickly to keep themselves competitive.”

Just how fast is automation moving? Well, hard to believe but true, robots have barely penetrated India and China relative to the size of their labor forces, yet is pushing low-cost manufacturing almost completely out of East Asia in under a decade.

In fact, a decade more is all that Tharman Shanmugaratnam, chairman of the International Monetary Fund’s policy advisory committee, gives a fast-closing window for India to catch up with rich countries or miss the boat.

“Time is not on India’s side,” said Shanmugaratnam at a government conference. “I give 10 years for labor-intensive manufacturing to survive in its present form before machines take over.”

With the Modi government needing five million new manufacturing jobs annually to keep pace with a growing population, Shanmugaratnam’s forecast is a punch in the gut.

But is it a well-deserved punch?  Better yet, can India counter the blow?

For the time being, with its GDP growing at 7.7 percent India, can boast of the world’s fast-growing economy. However, as the world has already witnessed with China’s decade of 7-plus growth, there’s more to a prosperous future than gaudy GDP stats. 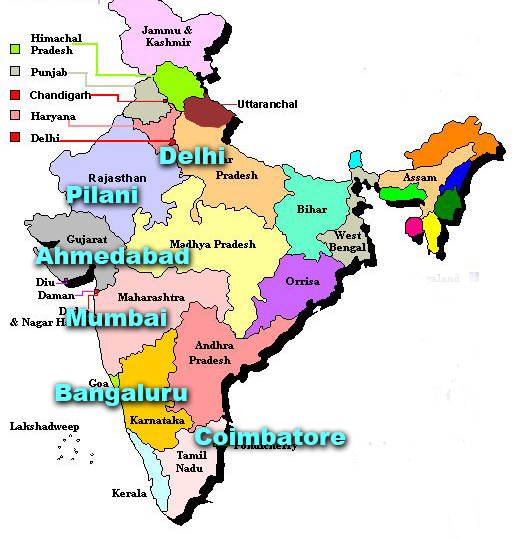 Where are India’s zones of excellence? Asian Robotics Review sought out a solid pair of boots on the ground to offer up a glimpse. Aiding in the quest was Debashis Das, founder and CEO of Bharati Robotics (Pune). Well-known, respected and deep into India’s robotics ecosystem and industry, Debashis sat for a Q&A on the centers of excellence and their outlook going forward.

When asked about India’s “enclaves” of great robotics education, he rattled off the following (see map lower left below): 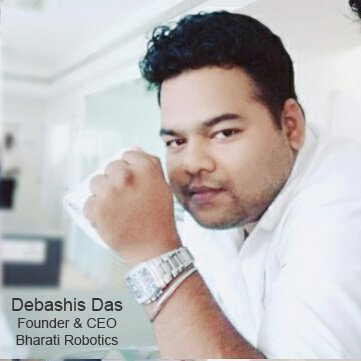