India builds robots?
In 2016, according to the International Federation of Robotics, India, with a population of 1.3 billion, bought 2,600 industrial robots from foreign suppliers. That’s about equal to the number of industrial robots shipped to the Czech Republic. China, in comparison, purchased 68,000-plus industrial robots in 2015.

Since India does not manufacture its own industrial robots, it’s probably a fair statement to say that it could use a few more.

The rap on India has long been that it doesn’t have the chops to build hardware, especially robots. First to defy and counter that assessment was GreyOrange in 2008. Its logistics bot, the Butler, drove the youthful startup into becoming the largest robotics manufacturer in India, and now has gone multi-national with tremendous success.

“We’ve done some stuff that India was not supposed to do,” Samay Kohli, co-founder of GreyOrange told the BBC in a recent interview. “People are not supposed to build hardware, robot products, out of India and we’ve been able to do that.”

GreyOrange, here in 2017, has been joined by yet another all-India team: TAL Manufacturing Solutions, with a potential market in India that dwarfs that of GreyOrange.

Cobot for India’s SMEs
Rajan Anandan, managing director of Google India claims that there are over 50 million small to medium enterprises (SMEs) in India (by comparison the U.S. has 27 million; China has 42 million). Google India’s analysis shows “An online presence helps SMEs garner 51 percent higher revenue and 49 percent higher profit than those without it.”

Currently, only about 10 million are online, so Google India’s program “Google My Business” is targeting 20 million more. Anandan says “Around 25,000 new businesses are coming on board every week.”

SMEs are very important to the success of India’s economy: SMEs account for 45 percent of the industrial output, 40 percent of exports, 42 million in jobs.

The same heady numbers of SMEs that drive Google India are what propels the interest of Anil Bhingurde, chief operating officer of TAL Manufacturing Solutions. SMEs are the targeted buyers for TAL Manufacturing’s new robot offering, the BRABO, India’s first and only homemade line of small robots.

Bhingurde reasons that his BRABO line will make SMEs better in terms of productivity, quality, speed, and ROI. The better India’s SMEs are able to do business and profit from using BRABO, the better the receptivity for wider acceptance of BRABO’s cobot capabilities.

With India’s red-hot economy growing its GDP at 7.6 percent, and with the government looking to increase growth in manufacturing 12- to 14 percent and boost its share of GDP by 25 percent by 2025, SMEs are forecast to be a $25.8 billion market for emerging technologies by 2020. 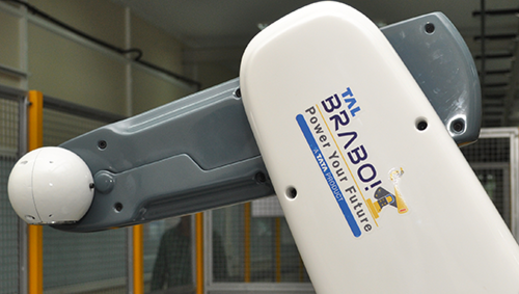 Where the major markets are 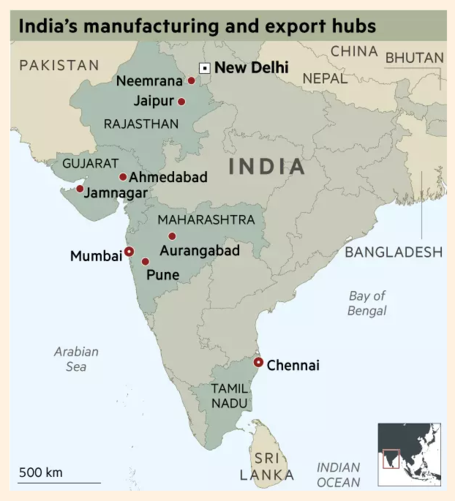 The BRABO trio
In the planning and development stages since 2014, the BRABO line got a quick showcasing at Prime Minister Modi’s Make in India (Mumbai) event last February 2016, but didn’t roll out in earnest until this year in Bangalore at IMTEX 2017, the annual exhibition for the Indian Machine Tool Manufacturers’ Association (January 26 to February 1).

The BRABO line was developed by a six-person engineering team led by Bhingurde at a cost of $2.7 million. “These are made in India, made for India,” he says. “The idea is to drive automation in the market by offering affordable and cost-effective solutions.”

The BRABO trio of small, articulated, 5-axis robots with 360-degree rotation range from 2kg, 5kg, and 10kg payloads. TAL claims that each of the BRABO trio are customizable and easy to use with an open-source controller with PC-based programming and Pro+ Motion software. Prices range from $6,000 to $15,000, with financing options from TATA Capital  to help fund the investment for SMEs.

TAL will focus on electronics, food, logistics, packaging, pharmaceutical, and automotive among other industries.

At TAL’s R&D facility in Pune, potential customers can watch the BRABOs strut their stuff at performing multiple applications like press tending, welding, pick-pack and sorting with the BRABO vision system, etc., basically most of the same functionality as seen in the cobot lineups from FANUC, Nachi, Panasonic and Universal Robots.

Additionally, more sensor technology coming in the near future when added to the BRABO line will bring the BRABO robots closer to matching the capabilities of the cobot leaders.

Bhingurde says that BRABO enjoys a significant 35- to 40 percent cost advantage due to its localized, Made in India, heritage. TAL Manufacturing’s current capacity he puts at 3,000 BRABO robots per year, but Bhingurde thinks he could ramp up to 10,000 quite easily and quickly.

Rajesh Khatri, TAL’s CEO, believes that automation is no longer an aspiration, it is a necessity. “As an aspiring nation looking to fast-tracking its industrial growth, affordable automation is the need of the hour. We view this, not only as an emerging opportunity but we want to be the catalyst in developing our industries and in turn our nation’s economy.”