Here’s why
Although cobotics is still a fledgling industry, the hallmarks of what it takes to be successful in it are beginning to show themselves across a core group of competitors vying for tops in sales. Universal Robots, Techman, and Doosan have three things in common that the rest of the competition has little of or lacks completely. Having an abundance of these three common traits might well be what crowns the ultimate winner in the coming cobot wars.

A fourth, dark horse candidate has popped onto the radar lately and the young upstart cobot developer bears watching. ELITE ROBOT, the Shanghai/Suzhou-based cobot maker, has a lot to recommend itself and may well be, when all is said and done, the pick of the bunch. In fact, this newbie, founded in 2016, has a lot of the same attributes and qualities as AMR wonder company Geek+: superb engineering, great product design, and vaunted R&D capabilities. A newcomer on the grow, ELITE ROBOT may well end up as tops in its category. 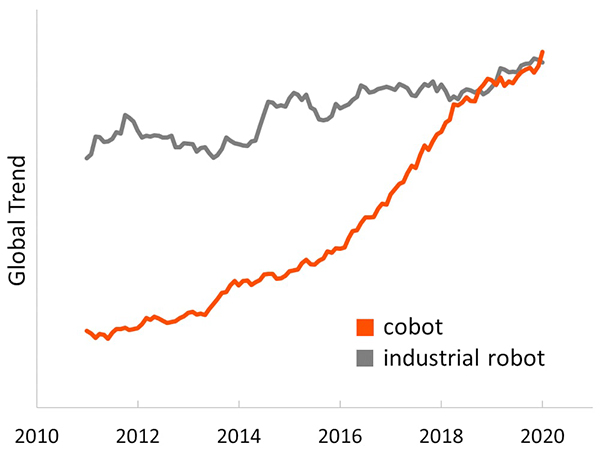 Cobot specialization
Specialization, or being cobot-only oriented, seems to be the lead attribute of the front-running cobot makers, and Universal Robots, Techman, and Doosan are just that, solely cobot focused. Everything at each of these four leaders—from C-suite decision making, to engineering prowess, to marketing—is directed towards a single technology: cobotics. And may well be a big reason why they are leaders in cobot sales.

From this singular focus on cobots, the other two attributes seem to naturally flow. The second, and one of particular importance, is R&D: each competitor has a large, well-funded R&D component. R&D is critical to cobot success because cobots, more so than their big brother industrial robots, are in the eye of a massive and intense tech storm swirling full of sensors, compute power, AI/ML and software. Mastery of all this tech will be necessary to ultimately conquer the challenges of logistics and Industry 4.0 manufacturing. Hence, R&D to the max seems the entry fee to success.  An R&D team’s command of native innovation, plus integration of outside tech into its cobotics— and then getting same to market—has an enormous edge.

Just look at Universal Robots smartly “allowing” hundreds of kit, component and accessory makers to ensure compatibility of their gear with UR’s cobot arms. It’s like offloading R&D. In the end, however, leaning on an outsider’s tech to make your technology cutting edge, can also serve to make UR’s own tech vulnerable, while, at the same time, serving to weaken internal R&D’s grasp of a true direction for its own core and advanced technologies.

Behemoth robot vendors that split the world’s biggest shares of industrial robot sales like ABB, FANUC, KUKA, and Yaskawa—although each has multi-millions of dollars invested in its cobot offerings—each, by dint of being so large and diversified, lack such a singular cobot focus.  ABB and FANUC are actually late comers to cobotics, almost as if going cobot was an afterthought. Since no cobot vendor other than Universal Robots (at 47%) has more than a 10% share in the global market, being mega-stars with industrial robots has not helped ABB, FANUC, KUKA, or Yaskawa to a market share any larger than Techman, a subsidiary of Quanta Group (Taiwan), the world’s largest maker of laptop computers.

The only anomaly in the pack is the very nimble and very able Omron, which has of late linked up its future cobot success in a deal with Techman. 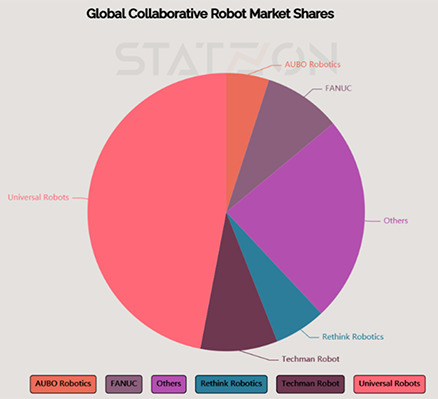 The third branch to success is the patent portfolio, which is also an outflowing from R&D. Cobot makers with a strong affiliation to a research university seem to have a strong edge here. New ideas, new techniques, new paradigms from the fresh, young minds of university teams can power up cobotics for an always-on flow of innovation that’s so very vital to cobot technology, which, in turn, is so vital in cobotics’ search for the elusive next big thing for logistics and manufacturing. 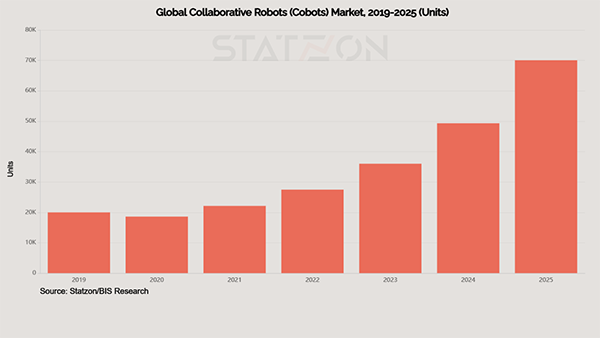 Universal Robots, Techman, and Doosan are not strong on the patent front or in affiliations with R&D at the university level.

For example, Universal Robots, the cobot leader with 47% of the global cobot market has, according to CB Insights, only seventeen patents; China’s ELITE ROBOT, on the other hand, has 150. And ELITE ROBOT has only been around since 2016. Eight years difference!

The great tech vibe given off by Geek+, with its stellar product and equally stellar R&D, now seems to be resident in the cobot world with ELITE ROBOT, making it a definite dark horse to watch for 2022.

Plus, the youthful ELITE is now packing $47 million in recent investor financing. Seems VCs have done due diligence on ELITE and are betting heavily on the newcomer. And it’s still early on; ELITE may well be in line for more investment millions or someone may even try to acquire the energetic cobot maker.

Although 50% of ELITE ROBOT’s personnel are R&D staff, it’s impossible to underestimate its connectivity to university R&D.

ELITE ROBOT’s founding team comes from the Robotics Institute of Beihang University, previously known as Beijing University of Aeronautics and Astronautics, and is one of the best-known research institutes in all of Asia. It’s director and leader is Professor Wang Tianmiao, chief scientist of China’s National Robotics Project that developed China’s first lathe control system and robot controller in 2003 and 2009, respectively.

Additionally, founding members also hail from the prestigious Tsinghua University (China’s MIT) and the University of Tennessee, making for a team with a combined 15 years of robot R&D.

ELITE ROBOT has a direct pipeline from Beihang to ELITE’s R&D labs—for cool new ideas and also for bright engineering talent to recruit for the company. And the results of all that are showing up in ELITE ROBOT’s corporate R&D efforts and in its product line. ELITE’s R&D pioneering ranges from collaborative robot design to core cobot components, control systems and servo drive systems, as well as intelligent vision technology.

To have a rock-solid patent portfolio bursting with great tech cannot be overemphasized; it says so much about a cobot company and its chances for market success.

Just take a look at FANUC’s dilemma.  In February of 2021, Northwestern University sued FANUC in Illinois Northern District Court for alleged patent infringement over cobots. The University also sued Mitsubishi Electric, Yaskawa, and KUKA over cobot patent infringement. No tech company wants to waste its resources or risk its reputation fighting IP infringement actions. Such legal predicaments only serve to put a chill on the company’s R&D and to worry prospective customers.

Still at starting line
When it comes to cobot sales all four Universal Robots, Techman, Doosan, and ELITE ROBOT are basically still at the starting line. According to Statzon, the global collaborative robot market was valued at around $675 million in 2020, with global cobot sales volume totaling barely 18,600 units for the year. That represents a small percentage of the 384,000 industrial robots sold in 2020, according to Statistica.

If the prognosticators are even half correct, cobots are in for an amazing next couple of years, maybe longer. BIS Research has global sales going from around $675 million in 2020 to more than doubling by 2025, to $2.3 billion. A doubling!

Most other forecasts are just about in the same ballpark as BIS Research.

Basically, these four cobot makers— Universal Robots, Techman, Doosan, and ELITE ROBOT are standing shoulder to shoulder at the starting line, as equals, as of 2022.

Maybe that’s why investors just anted up $33.7 million for Doosan.

The “three tech attributes”—cobot specialization, cobot R&D excellence, and leadership in cobot patent portfolios—will show themselves as key differentiators sooner than later for the contenders.

The cobot wars will ultimately come down to the battle of these four armies, which will make for a very interesting next few years in advancing the fortunes of cobot vendors, but also in advancing cobot technology by leaps…maybe even exponential leaps.