“We are taking Magnetic Surgery to the next level with this disruptive approach. Our robotic platform is designed to be the first to enable the clinical benefits of a less invasive procedure with fewer incisions, while allowing the surgeon full control of the platform and surgical instruments directly beside the patient,” said Dr. Alberto Rodriguez-Navarro, minimally invasive surgeon, founder and CEO of Levita Magnetics.

“In fact, the Levita’s magnetic surgical system component is so revolutionary and unlike current technologies that the FDA had to create a whole new category.

“With its compact footprint, the robotic platform is specially designed for high volume ambulatory or same-day discharge abdominal surgeries. The aim of these combined benefits is to increase the volume of high-quality, efficiently performed procedures while improving surgical access to patients.”

This innovation is emerging as a solution to decompress the health system and provide an effective solution to long waiting lists for surgery. The Levita robot has a triple impact: for the patient, there are fewer incisions which means less pain and faster recovery; for the surgeon, it allows better visualization during surgery, and for the hospital, it increases efficiency, since surgeries can be performed per day.

Four years ago, the Chilean doctor Alberto Rodríguez-Navarro, founder of Levita Magnetics (Menlo Park, CA), marked a milestone by developing magnetic surgery, a technology in which a system of devices allows organs and tissues in the abdomen to be moved from the outside with a magnet.

The great advantage of this modality is that it allows even less invasive procedures, since it reduces the number of incisions (cuts) that are made in the abdominal wall, which means less pain, faster recovery and avoidance of scars.

Today that innovation, which was the first new surgery technology born in Latin America to be approved by the FDA, continues to evolve. With a joint work between Chile and Silicon Valley, it was possible to combine magnetic surgery with robotics, developing a disruptive and new platform that will change the way of performing abdominal surgeries worldwide, including gallbladder, obesity, appendix, colon and gynecological interventions. among other. It’s about the robot Levita.

Much smaller, easy to handle and cheaper than traditionally known large robots, the model enhances the work of the surgeon, who, using magnetic technology and controlling a robotic camera, has total control of the procedure with optimal viewing conditions. . Thus, the result is better surgeries (less invasive), shorter and with shorter recovery times.

In fact, studies carried out with the first device show that the duration of the operation decreases by 10%, the recovery time of the person by 25% and their hospitalization is reduced by half. In this way, it has a direct impact on the productivity of the health system, helping to combat the much discussed and complex waiting lists.

“What is spectacular about this new robot is that it has a triple impact. It is better for the patient, since it conditions a less invasive procedure, we also empower the surgeon, who is the scarcest resource, with a platform that allows him to operate better and at the same time we allow the stay in recovery and hospitalization to be shorter, giving space to treat new cases ”, assured Dr. Rodríguez-Navarro, who led the team of Chilean and North American professionals in charge of development.

“The end effect is that we allow surgeons and hospitals to increase the capacity to do more surgeries and thus reduce the waiting times for surgeries in the communities they serve. Having surgery on time reduces complications and even death from the underlying pathology, ” he added.

Democratize technology
The market for surgical robots is not new, it has been on the market for more than 25 years. However, the models that are currently used have barely penetrated 2% in the United States and in our country there are only five of them, which are intended for extensive and complex procedures, which do not correspond to the daily pathologies that today present greater delays in attention.

“We want to democratize access to this type of technology, pioneering worldwide, as it is the only way to improve the well-being and quality of life of people who so many times, due to a resource issue, see their diseases worsen instead of treat them simply in early stages. Abdominal surgeries are the most frequent, around 50 million of them are performed in the world each year, which is why this advance has a very high impact ”, said the specialist.

In this sense, he pointed out that “in Chile no public hospital has a robot for surgery and we know that we can change that reality.”

In Chile, the first operations with this cutting-edge robot are already being carried out and, in parallel, progress is being made in the approval of the FDA in the United States. Regarding future plans, Rodríguez-Navarro anticipates that they will add “artificial intelligence functions, so that the robot can learn and predict what happens in certain movements, in addition to sharing images in real time with another surgeon anywhere in the world.” 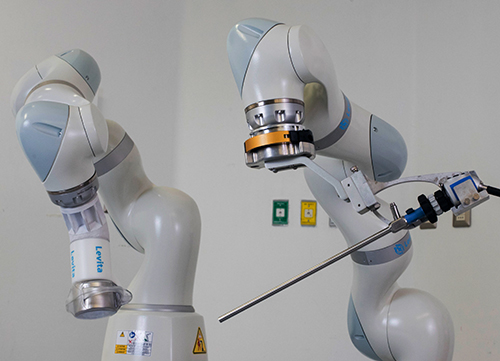 “We want to continue optimizing the system, in order to increase the benefits of our robot. Likewise, we are laying the foundations for the first robotics and Artificial Intelligence center in Chile, ”he said.

In addition, Levita does not occupy a console, therefore the doctor always remains next to the patient, learning to use it is simpler and the goal is to make it accessible to public systems, where there is a greater need to solve the problem of waiting lists.