Here’s a less than comforting thought:
“Due to the openness of wireless medium, robotic networks that consist of many miniaturized robots are susceptible to Sybil attackers, who can fabricate myriads of fictitious robots. Such detrimental attacks can overturn the fundamental trust assumption in robotic collaboration and thus impede widespread deployments of robotic networks in many collaborative tasks.”
—Detecting Colluding Sybil Attackers in Robotic Networks

Is there always a defensive option?
Could it be that digital disruption has rushed headlong into worldwide transformations only to carelessly leave its back door wide open, unguarded and vulnerable to attack? And does it really matter where the ransomware cyberattackers call home? Maybe we should be thankful for a foreshadowing that happening much later might well be more catastrophic.

Like COVID, the world has been caught unaware and now must hustle up a digital vaccine for a stout defense of cyberattacks.

How vulnerable will Volkswagen’s Chattanooga plant be when 1400 FANUC robots start pumping out EVs (electric vehicles) in 2022? Can the robots be hacked and made to weld each other together instead of car frames? Seems very possible. 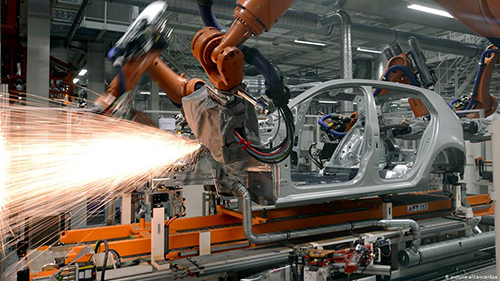 Kaseya (recently victimized software), a Miami-based software supplier that helps technology-service providers manage computer networks, was told of a serious cybersecurity hole in its Kaseya VSA software on April 6, [three months prior to the ransomware attack] by Victor Gevers, chairman of the Dutch Institute for Vulnerability Disclosure. Gevers’s organization, which is a volunteer-run security group, discovered the flaw.

To get a little more acclimated, two definitions are helpful to know:

Byzantine robot: A malicious robot that is temporally or constantly controlled by an adversary.

Sybil attack: An attack that grants undue influence to a single entity simply because the attackers fabricate myriads of fictitious robots. The name “Sybil attack” comes from a book, Sybil, about a woman with dissociative identity disorder (i.e. multiple personality disorder).

Blockchain
The two main challenges facing robots: 1. Promoting the level of security required by a connected system; and, 2. Allowing multiple robots to act in a consensual manner.

“Blockchain technology acts as an enormous, virtual ledger which records all of the transactions performed within the chain and cannot be modified.

“This database boasts the best anti-theft security around and allows users to perform operations without the need for a trusted intermediary. With this technology, one can glean more value from the information generated by robot networks, cross reference the results and accelerate execution of the task at hand.”

“The combination of blockchain with other distributed systems, such as robotic swarm systems, can provide the necessary capabilities to make robotic swarm operations more secure, autonomous, flexible and even profitable.”

An Overview of Blockchain Integration with Robotics and Artificial Intelligence

Blockchain technology is growing every day at a fast-passed rhythm and it’s possible to integrate it with many systems, namely Robotics with AI services. However, this is still a recent field and there isn’t yet a clear understanding of what it could potentially become.

In this paper, we conduct an overview of many different methods and platforms that try to leverage the power of blockchain into robotic systems, to improve AI services or to solve problems that are present in the major blockchains, which can lead to the ability of creating robotic systems with increased capabilities and security. We present an overview, discuss the methods and conclude the paper with our view on the future of the integration of these technologies.

Blockchain technology was first introduced by Satoshi Nakamoto alongside crypto-currency, Bitcoin. Both have grown in terms of adoption, value and usage but the value of blockchain is not only to hold crypto-currencies but to allow the integration of a huge panoply of systems over the same platform in a decentralized and secure way.

Although these projects opened many doors, they are still lacking on some essential characteristics, like the energy consumption and the speed that a block takes to be validated. With these problems in mind, every year thousands of new ideas and services to work with the blockchain technology are proposed, but there isn’t a unique solution for all possible applications and that encourages the development of new work. This lack of a single solution is well seen in the robotics field, where integration with blockchain is still low and there aren’t many approaches that show how both technologies can overcome challenges together. The introduction of blockchain in robotic systems could solve many problems that those systems face.

The first problem that it can solve is security, as many of the systems have problems of trust between robots and data integrity, blockchain can provide a reliable peer- to-peer communication with security measures over a trustless network. Another advantage of this integration is the possibility to make distributed decisions since the blockchain can ensure that all participants of a decentralized network share identical views of the world.

This assurance can allow the system to reach an agreement over the whole network and to have global collaboration between the robots.

We value the AI aspect because robotics is heavily based on AI systems, and if a system can work towards improving those systems, the more likely is that robotics can be integrated there and benefit from that platform.

In this section we present work that has been done that tries to integrate blockchain into robotics, AI or that adds significant features that we  believe  to be crucial for robotic systems, like enhanced security, the ability to change the blockchain protocols without the need for a hard-fork or the ability to validate more transactions per second than most used blockchains, since this is a major concern to register robotic events.

Robotics
The work conducted by Bruno Degardin and Luis A. Alexandre (as supervisor), shows how to create a blockchain and use it to store robotic events. This idea allows the creation of smart-contracts that use information acquired on the wild by different robots (possibly from different manufacturers) and have action-triggers based on the contracts that are stored and verified on the blockchain. This can ultimately improve productivity in a factory and reduce the time spent on doing tasks like refilling the screws for a robot that used the blockchain to indicate that he needs more screws to continue is work.

An Overview of Blockchain Integration with Robotics and Artificial Intelligence