“Capital is being replaced by creativity and the ability to innovate – and therefore
measuring human talent is the most important factor of production.”
—Klaus Schwab, World Economic Forum, The Fourth Industrial Revolution

Reskilling: massive but necessary
Are world governments truly serious about reskilling workers? Tens of millions of idled workers affected by the twin job eliminators—the global COVID pandemic and the equally global automation of industry—seem to be wallowing at pause, while they await their governments to take definitive action to help.

Only one world government seems to be stepping up to comprehensively address the problem, and the reskilling approach that it’s taking on has jaw-dropping implications. That country is China, and its way forward is to reskill 220 million workers. To be sure, it’s a mindboggling number; a mass of humanity nearly equal to the entire population of the U.S.

If it were any other country, such an effort would probably be immediately dismissed. But this is China, and it’s string of massively successful national undertakings over the last thirty years offers lots of credibility that reskilling its workforce might be its next great success.

The 14th Five-Year Plan (2021–25), which rolled out in March 2021, has provisions in its top 10, to-do list aimed directly at elevating its citizens. Seems the country is doing some right thinking about the effects of automation/COVID on its people. Already, there’s $14.8 billion allocated to reskilling, with much more needed to flow from the new Five-Year Plan when it makes its appearance.

McKinsey Global Institute is out with an amazing report titled: Reskilling China: Transforming the world’s largest workforce into lifelong learners. IBM and PwC are out with similar reports, and each has numbers that border on the fantastic. 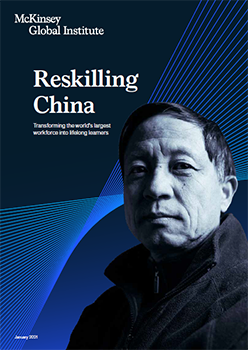 If Klaus Schwab is even half right when he writes “Capital is being replaced by creativity and the ability to innovate – and therefore measuring human talent is the most important factor of production,” then the resident talent flowering out of reskilling 220 million could well be the boast in innovation that China has been desperately trying to foster. A populace reskilled to take on the future could be a more powerful force than the much-heralded Belt & Road initiative.

In addition, legacy-building for President Xi Jinping would be off the charts, if he became the architect of reskilling 220 million of his people. It would easily vault him into the pantheon of Deng Xiaoping, and maybe Mao himself.

The rest of us
If you’re Chinese, that’s something exciting to look forward to. And these days, a little excitement about the future of work and jobs is much needed.

There’s more excitement and hope reading about Amazon ponying up $1B in its pledge to reskill 100,000 of its employees—including apprenticeships in robotics—than listening to what seems to amount to continued government lip service in the face of an impending disaster. In the U.S. the labor market remains 10 million jobs below its pre-pandemic levels. The Organization for Economic Co-operation and Development (OECD) was reporting 45.5 million persons unemployed at the height of the pandemic, back in of January 2021.

Employer initiatives are spotty at best. Deloitte reports that only 17 percent of companies have made “meaningful investments” in reskilling initiatives. In the end, big problems cost big money that only big governments can provide. So far, big governments are no-shows.

China’s reskilling plan may become a much-needed model for the rest of the world. As McKinsey puts it: “Because of the sheer size of China’s population and workforce, the lessons it learns on this journey and the solutions it crafts are likely to have broader relevance to other economies as they face similar challenges.”

No doubt, if successful, it would become a huge public relations coup for Xi and China as the architect of a global reskilling triumph.

From research reports to the real world
China is the first world government to put some large money behind reskilling its people. A few months previous, Xi’s partner, Premier Li Keqiang, offered up initial numbers to the unfolding plan in his China to upskill workforce to expand employment. Li said that the country is putting up $14.8 billion to kick-start upskilling a workforce of 50 million people over the next three years, with 15 million to be trained this year. Of course, much more money will be needed to achieve the very lofty goals of reskilling some 220 million workers, but, at least for now there’s a plan on the table and the country is committed to it. That’s more than any other large, industrialized country has planned…or even intimated taking on. 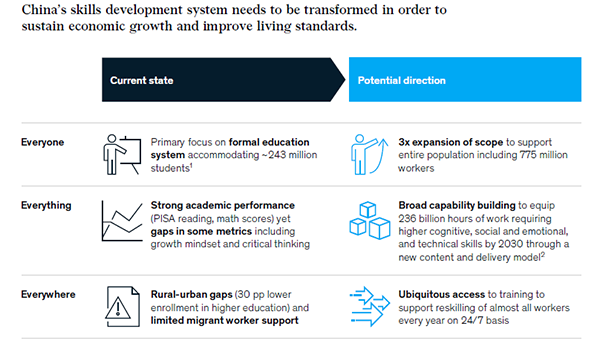 Staggering numbers
By 2030, reports McKinsey, “up to 220 million Chinese workers, or 30 percent of the workforce, may need to transition between occupations due to automation …516 billion hours of work—an average of 87 days per worker—need to be redeployed by 2030 as the mix of skills in demand changes.”

That’s a lot of change!

Most every report on China’s reskilling journey, McKinsey et al, circles up its wagons in and around the year 2030. That’s back-to-back doubling down on Five-Year Plans (2021-2030); the 14th Five-Year Plan kicking things off, with an eye toward the 15th Five-Year Plan settling in on the transformation.

And the workers themselves, they’re primed and ready to begin the process of reskilling that each and every one of them realizes will have a profound impact on their lives and livelihoods.

The Boston Consulting Group (BCG) surveyed labor trends and work preferences of 366,000 people in 197 countries. “Change is coming and the workforce knows it,” write the authors of the BCG survey. “Sixty-one percent of people believe that global megatrends greatly affect their jobs and will continue to do so. As a result, many devote significant time to refining their skills. The vast majority are also willing to learn new skills to become attractive candidates for completely different jobs.”

BCG’s survey has amply shown that the vast majority of millions of anxious, laid-off workers are ready to begin a path toward change in their lives. Still wanting, except for China, are other governments ready and willing to take their citizens on that journey.

And if, as Schwab reckons, “human talent is the most important factor of production,” then reskilling is a win-win for everyone.

The Search for Compassionate Leadership

Automation Is Inevitable; Mass Unemployment Isn’t!
Let’s mobilize! Massive government interventions are needed to train, retrain & reskill millions of workers for better jobs. …People, we can do this!

And here’s the money to do it: Biden signs the $1 trillion bipartisan infrastructure bill into law