Touch Blind: The Quest for Grippers That Feel

Australian haptics developer endows robot grippers with the ability to feel, which might lead from factories to logistics to prosthetics to connecting with dementia patients

Touch blind
In an effort to enable robots to work faster and more accurately, technology is fast about loading them up with all sorts of new sensor gear, and they’re doing more varied work because of it. Lights, camera, action! Most of their new duties revolve around vision systems.

However, if robots are to take on ever more jobs from humans, they will inevitably benefit from adding ever more human-like senses to their limited repertoire of sight and sound. One of the most elusive is the human sense of touch. Robots cannot feel what they touch; they are touch blind.

For most industrial robots the sense of touch—being able to feel what they are working on—would be a luxury without purpose. Programmed to do repetitious jobs, most times robots need only a good vision system.

But that could change. Liberating robots from touch blindness would allow for the grippers on industrial robots to handle, understand, and give feedback in dealing with soft, fragile and deformable objects, which, in turn, could open up new avenues of manufacturing.

In their 2019 review of haptics or active touch in robotics, the authors of Active Haptic Perception in Robots: A Review (Frontiers of Neurorobotics) show lots of lab work in haptics for robots going on but not much in the real world of marketable products.

For the importance of haptics in robot manipulation, they show three broad areas of need. As they put it: “Haptics provides useful information under a wider set of circumstances than is sometimes appreciated.”

That being said, although MIT’s STAG haptic glove (still in R&D) with its 500-plus sensors across the palm and fingers (see photo) will be a great advance, especially for prosthetics, there’s not much available for the plain old—but ubiquitous—two-fingered industrial gripper. 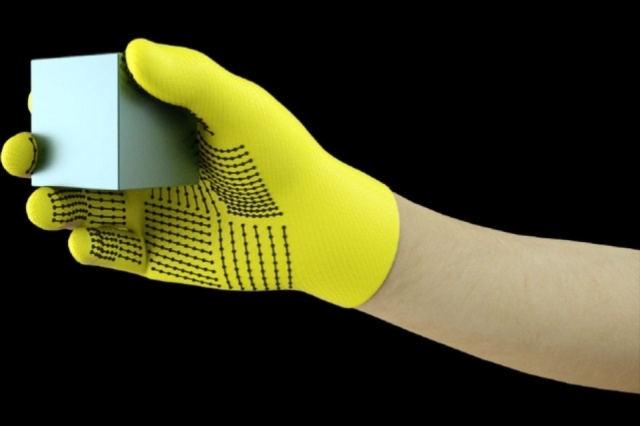 An exception is a very new and very interesting product lineup from Contactile, a small, newbie Australian (Sydney) company founded in 2019 that shouts out from its homepage: Advancing Industries Through an Intelligent Sense of Touch. “We are a sensor + haptics company specializing in tactile sensors for real-world robotic applications.”

Not yet a pinball wizard
Dr Heba Khamis, one of the three co-founders of Contactile, says of her company’s tech: “Most touch-based sensors that are used in robotics are either 3D force/torque sensors or pressure sensor arrays. These sensors can tell how hard the robot is gripping, but can’t determine how hard the robot needs to be gripping.”

Khamis, and her two Contactile co-founders, Benjamin Xia and Dr Stephen Redmond collaborated on a research project at the University of New South Wales (Sydney) that resulted in the development of Contactile’s technology.

Their sensor technology won the Advanced Manufacturing Award at the Australian Technologies Competition 2020. Well-deserved and commendable she remarks about the award, but even better: “Our sensor enables robots to perform as dexterously as humans do.” 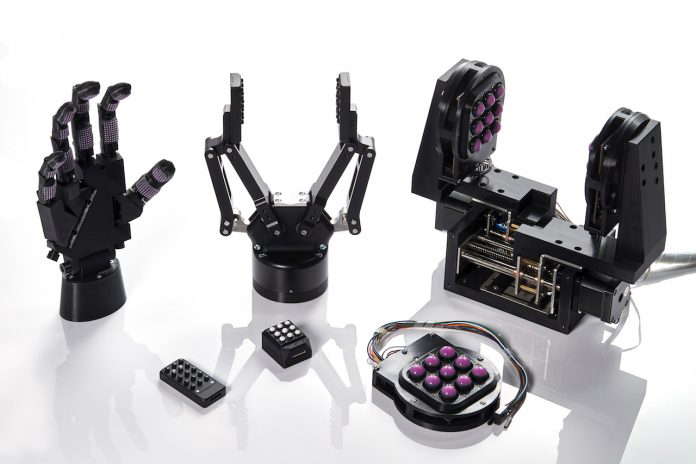 “The sensors can measure 3D deflection, 3D force and 3D vibration at each array element, as well as measuring important emergent properties such as torque, incipient slip and friction – essential tactile parameters for robotic dexterity.”

In a nod toward immediate availability for manufacturing, “the sensor can be easily retrofitted onto conventional robotic grippers. The sensing solution can be tailored for any industry that requires automation of material handling from pharmaceuticals and food processing to heavy industries.”

Contactile claims that its first-ever, sensor-array technology, when integrated into a robotic gripper, is able to grasp objects “it has never encountered before with an optimal grip force (i.e., safely and securely), irrespective of the object weight, size and friction without additional inputs or programming.”

Beyond manufacturing and logistics
Applications for touch technology in a robot’s hand go way beyond factories and logistics. There is a growing list of capabilities where the sense of touch would be welcomed. For example, surgeons teleoperating surgical robots are unable to feel their operating instruments, and more importantly, unable to feel anything inside of a patient, like organs or blood vessels, etc. Surgeons are touch blinded by the unfeeling probes of a DaVinci surgical robot.

A prosthetic hand is touch blind as well, but if endowed with touch would open new worlds of touch to amputees.

Now that robot touch has been broached and brought out into the world, who knows where the technology could lead. Could a social robot endowed with touch use touch to make contact with people suffering from senile dementia or Alzheimer’s? When all other forms of communication might fail, could touch succeed?

David Linden, a neurobiologist at Johns Hopkins and author of Touch: The Science of Hand, Heart, and Mind, writes: “We’re not entirely sure why it happens, but it seems that early touch experience is extraordinarily important for development both cognitive function and a healthy body.” For example, when premature infants are born and put in isolators, they’re taken out for a few hours a day, and pressed against a parent’s skin. If not touched for the first two months of life, their health and well-being could turn out to be disastrous.

That’s because, as Linden explains it, humans possess a second or emotional touch system. “It’s mediated by special sensors called C tactile fibers, and it conveys information much more slowly. It’s vague — in terms of where the touch is happening — but it sends information to a part of the brain called the posterior insula that is crucial for socially-bonding touch. This includes things like a hug from a friend, to the touch you got as a child from your mother, to sexual touch.”

A social robot stroking the arm of a dementia patient might make contact with the person inside the patient, who for all intents and purposes has been lost to society.

The early work in haptics being carried on at Contactile might not produce a robot pinball wizard anytime soon, but might in time open a door to an as yet undiscovered world of cutaneous feedback.